It wasn’t easy to see much potential in the underweight bay mare and there were no bids on her at the sale, so she was destined for the killer’s. But her sweet face and kind eye would save her.

Stephanie Bitondo had been riding for just a little over a year when she decided she wanted her own horse, but she’d almost given up. With a budget of only $1,000, she hadn’t been able to find a quiet, mature, 16-plus-hand gelding, even though she was searching the local horse rescue group websites.

The nearby Camelot Feed Lot in central New Jersey conducted sales every Wednesday, and any horses that didn’t sell were sold for slaughter the following Saturday. Rescue groups stepped in and posted photos on social media of those horses otherwise doomed if homes weren’t found for them within the three-day time window. It was there that the little bay mare’s sweet face and kind eye caught the attention of a friend of Stephanie’s trainer, who immediately recommended that she take the plunge and purchase the mare.

“I was kind of desperate at that point,” Stephanie explained. “I really wanted a horse. When we saw her picture, my mom asked my trainer, if she were in her place, would she do this? When my trainer said yes, we just kind of trusted her on that.”

On that recommendation, Stephanie used her mother’s credit card to buy the mare sight unseen and found herself preparing her trainer’s trailer to go get the 7-year-old bay mare. On the way, Stephanie decided on a name: Bellatrix, for a star in the constellation Orion, known as the Amazon star. After all, this mare was described as a warmblood/TB cross of over 16 hands, so she must be like an Amazon, right?

Bella was headed to slaughter, now she’s headed to the winner’s circle!
Photo by Paws and Rewind LLC

What they found at the feed lot was a scrawny, rough coated mare only a little over 15 hands. With her ribs showing and in obviously poor health, she hardly looked like an Amazon, but she did have the kind eye and sweet face that indicated a willing nature. It was April 1, 2010, and the situation seemed like a real April Fool’s day joke. At first, Stephanie had reason to regret her decision.

“She couldn’t canter, especially on the left lead,” Stephanie remembered. “And everything scared her: the saddle, the girth and even people.”

Realizing her inexperience with such a green horse, Stephanie made the decision to move to Stepping Stone Farm and begin taking lessons with Anne Marie Compagnone. Bellatrix, soon nicknamed Bella, relaxed and began to bloom. “I always made sure to have Ann Marie get on her for tune ups so that I knew she was getting a very correct ride,” Stephanie said emphatically. “It was definitely something that helped me out since I had someone who was riding her correctly. It helped Bella, and I think it made her calmer.”

Anne Marie and Stephanie worked with Bella slowly, treating her like a very young, green horse even though she was seven. She was obviously very unbalanced, so they did a lot of flatwork, riding her in a simple snaffle bit, not relying on a lot of equipment or gimmicks. “Rome wasn’t built in a day!” Anne Marie often told Stephanie.

To help Bella with jumping, they started with simple grid work consisting of very little cross rails. “We just kind of let her figure it out on her own,” Stephanie remembered. “When we first put courses together, we started at the trot, then she began cantering when she landed. When she got balanced and comfortable, all of a sudden she had a lead change and we never really worked on it!”

They soon found that Bella was a very smart horse. She remembered what Ann Marie had taught her, and she surpassed Stephanie on what they were learning together. “I had a green horse and I was teaching her, or so I thought,” Stephanie said. “Then one day Anne Marie and I laughed when she said, ‘I think your green horse is smarter than you!’”

Bella and Stephanie started in local shows in the New Jersey area in hunter classes. They now compete successfully in the 3’6” adult jumper division.

Stephanie’s experience proves that it’s possible to rescue a deserving horse and make it into a quality show horse and companion with a little hard work, patience and the help of a good trainer. Especially if you start with the right horse. Look for one with a kind eye.

About the writer: Doris Degner-Foster rides with Harvard Fox Hounds in Tulsa when she’s not interviewing interesting individuals in the horse sport. She’s working on a murder mystery novel where a horse strangely appears in different people’s lives to help them through a crisis. Check out her blog, Notes From the Field on the Sidelines website. 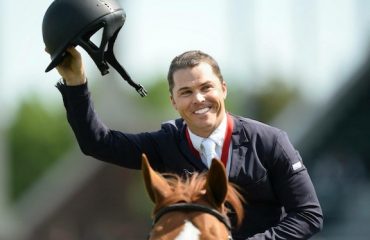 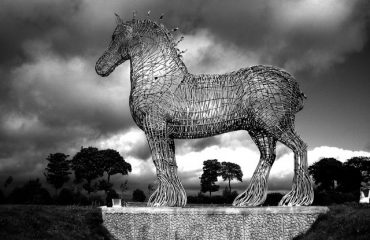