Now — Brianne and Clementine continue to show together.
Photo by Cayce Harrison-Judge

In 2006, young horse fans gathered in living rooms across the country to tune into something they’d never seen before — a reality TV show based on junior riders preparing for the Maclay equitation championship. The show, “Horse Power: Road to the Maclay,” aired on the Animal Planet channel and the tagline read, “Meet America’s top teenage riders and their trainers, horses and families and watch the daily drama of the high-powered horse circuit.”

Throughout the episodes, one rider emerged from the cast to capture the heart of America and become a household name among horse households — Brianne Goutal. During the final episode, her growing number of fans held their breath as they waited to see if Brianne would become the first rider in history to win all four equitation finals.

She not only won, but America had a new riding sweetheart. As the Animal Planet cameras rolled following her final victory, Brianne’s trainer at the time, Frank Madden, was asked about Brianne’s future. “She’s one of the sports superstars,” he said. “Hopefully she’ll stick with it.”

Flash forward to 2014. Brianne, now 25, has stuck with it. She’s an Ivy League graduate with a degree in literature from Brown University; has competed on multiple Nations Cup teams for the United States; represented the U.S. in the Rolex FEI World Cup Jumping Finals in Sweden in 2008 and in Germany in 2012; in 2013 she won the $200,000 American Gold Cup CSI4* on her horse Nice de Prissey; and in May of this year, she piloted Nice to victory in the $50,000 Old Salem Farm Grand Prix.

While Brianne has certainly stuck with riding, she has also stuck close to what she loves and what makes her happy: a deep passion for her family, her horses, her dog, Max, and traveling the world.

Family is the foundation of Brianne’s life. During the “Horse Power” TV show, Brianne’s family could be seen sitting in the audience. “I know it sounds cheesy, but I hit the family jackpot,” she said. “My parents are incredible and I have a huge French family in France and they are the most creative amazing group of people. We are a giant clan that all gets along.”

Brianne grew up with three sisters — Francesca, the oldest, who is about to be a new mom; a younger sister, Clementine, who also rides; and the baby of the family, Chloe, who’s an actor and singer. “It was amazing growing up together,” Brianne said. “When the fights were real, they were very real. But there weren’t very many. After about 10 years old, we all learned to get along. I have an incredibly supportive family. My sisters came to my horse shows and, even though I was always on the road, we were always together as a family.”

A native New Yorker, Brianne loves the city but spends her summers in Europe. “My father is French so I have dual citizenship,” Brianne said, adding that she speaks fluent French. “I’ve worked with my family in France for 13 years at their farm in Roanne. It’s my base in the summer and it’s very centrally located. We can get on the highway and go anywhere.”

Brianne’s father, Jean Goutal, is in the restaurant business and has restaurants in New York, Los Angeles, Chicago and Philadelphia. “His restaurant in New York is Le Colonial, a French Vietnamese restaurant,” Brianne said. “I’ve always wanted to open a restaurant with my dad. When it comes to food, I have my dad’s palate.”

Brianne admits to being a weird eater. “I don’t like sweets and I don’t eat breakfast food,” she said. “I eat steak for breakfast and when I’m in the city, I mainly eat sushi. I eat organ meats — heart, tongue and liver. My mother and grandmother grew up eating a lot of weird food also, and I managed to get the weird taste buds from both parents.”

Brianne’s family tree also includes her dad’s sister, Annick Goutal, who founded the French perfume line The Annick Goutal House. “I wear her perfume,” Brianne said. Brianne’s grandmother, on her mother’s side, is Terry Allen Kramer, a prolific Broadway producer. “She’s also very supportive. She rode as a child and she comes to my shows and is on the phone with us four or five times a day. She has a farm in New York called Remarkable Farm.”

The Goutal girls were young when they named their own farm. “We named it Cloverleaf because we thought clovers were lucky and we’d have a lucky barn,” Brianne said. Has the name Cloverleaf brought luck? “I always wanted my life to involve horses, and it does. And I always wanted to compete at the highest level possible and I’ve always had championship goals.”

Another goal Brianne has always had is to travel. “I love to travel and I’m obsessed with Asia. I eat Asian food five times a week. I’ve been to Japan and Cambodia but I haven’t been to Vietnam and I want to go there. Not just for a short break, but to spend lots of time there.” Her constant travel companion is her dog, Max, a breed known as a St. Petersburg Orchid that her dad brought back from Russia. “Max is 13, but he acts like he’s 4. He’s my travel buddy.”

Brianne’s European travel consists of country hopping combined with horse showing. “I spend one week in France, the next in Switzerland. When you’re on that kind of schedule, you’re exposed to so many different riders and when competing in Europe you’re riding against people you’ve never heard of. In the United States you’re competing against the same top riders over and over again and you get to know who can go fast, who can make sharp turns and so on. But in Europe you add the elements of not knowing.”

If Brianne had her choice of methods of travel, it might surprise some to discover that her preferred mode of transportation might be a different kind of horsepower. “I love vintage cars and I’m a motorcycle freak,” she said, adding with a laugh that if someone gets her started talking about cars she won’t stop. “I can talk cars!” she said. “My favorite is a 1961 Shelby AC Cobra or a Porsche 356 Outlaw.”

She can also talk horses — although she won’t name a favorite. “That wouldn’t be very fair,” she said. “Although Onira’s in a league of his own, but I feel guilty even saying that.”

At the beginning of 2014, Brianne was competing at the Winter Equestrian Festival in Wellington, Florida, and everything was going great until week nine when a horse flipped on her and she hurt her shoulder. “It was a burner injury, which is common in football players,” she said. “But that’s not the longest I’ve gone without riding. I broke my leg and had to take three months off. And I’m literally the world’s worst patient and I drive everyone insane.”

Brianne’s back in the saddle now, and whether she’s starring on a reality television show, spending time with her family, traveling the globe or riding a motorcycle, Brianne’s passion for horses remains the power that drives her. “My life will always involve horses,” she said. “It’s an amazing sport because you can continue to ride for a long time.”

Rest assured, Brianne will stick with it. The young girl who won the hearts of so many will always have a passion for horse power.

Then — Brianne and her sister Clementine
Photo courtesy of Brianne Goutal 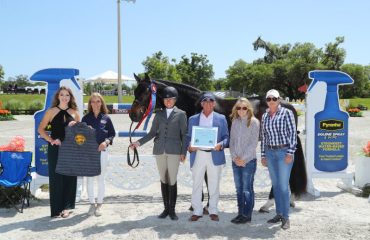 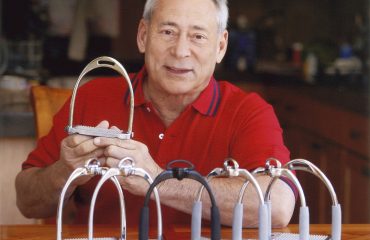 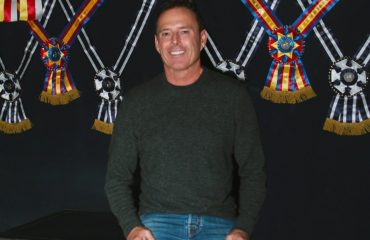