Derek Petersen: From Africa to the Promised Land

Morning light dawns on the green pastures of Legacy Farm’s 45 acres in Archer, Florida. As Grand Prix show jumper Derek Petersen starts his day, he can’t help but reflect on his long journey to this peaceful place: A journey filled with high-stakes risks, faith in opportunity and blessings, all leading him to realizing his dreams of becoming a professional rider and using that platform to honor God.

Born in Pennsylvania to Helge and Brenda Petersen, Derek and his brothers, Mike and David, started riding horses after moving to Arizona as young boys. “My mother had taken lessons but never got her own horse,” Derek said. “My parents wanted us to be able to ride and promised us they would get a horse next time we moved.”

They lived happily in Arizona for seven years before a fateful family phone call from half a world away changed the course of their lives.

“My mother is originally from Africa,” Derek said. “That’s where my parents met and the rest of our family lives there. We received notice that my grandfather was dying, so we got on a plane to visit. Within 24 hours of us arriving, my grandfather died.”

Their somber visit to family turned into a 14 year stay with unimaginable adventures.

Once in South Africa, Derek’s parents rented a five-acre property from a family friend. The property came furnished with everything, including an old horse. “It was our first horse,” Derek said. “I would rush home from school every day and ride him around without a saddle or bridle.”

Not long after, the Petersen family purchased their own plot of land in the village of Hilton, South Africa, which backed to a dense copse of jungle. Their father hacked away at the creeping vines with a machete to clear a space and fulfill his promise to his sons to buy a horse. “For $100, my parents bought an old stallion named Whiskey,” Derek said. “He came with a bridle and saddle, too.”

Religion has always been an integral part of the Petersens’ family life, and Derek’s parents were on the conservative side, so the name Whiskey had to go. “We called him Misty,” Derek said. “He was already 20 years old when we bought him, with no teeth left in his head. We shared Misty between the three of us and rode him to school every day.”

Knowing the old horse’s days were few, the Petersens looked for another horse for their boys. Pretty soon the brothers were finding and training their own horses.

“We were infamous,” Derek said. “Everyone knew us as the crazy American kids. We’d catch wild and feral horses around the village and ride them home. We’d jump right on them, never knowing if they were broke to ride or not. We let the local police know that if any of them were claimed by owners, we’d return them.”

Derek’s first brush with show jumping came at the age of 10 when his family attended the Royal Horse Agricultural Fair in Pietermaritzburg, South Africa.

“My mother asked us if we were interested in jumping,” Derek said. “We were a bit scared, but that turned into curiosity. By the next day, we were creating jumps out of junk and trying to convince Misty or any other horse we caught to jump over them.”

To focus her sons’ energies, Derek’s mother signed them up for riding lessons and Pony Club with trainer Sara De La Hoy. “It was 10 miles to Sara’s property,” Derek said. “Our lessons were one hour long, and my brothers and I would ride our horses there and back. I can’t imagine letting my kids do what I did growing up!”

Back in the States

In 1986, at 20 years old, Derek found himself crossing the Atlantic Ocean with his family again.  “We sold everything and moved to Tampa, Florida, with one suitcase and the shirts on our backs,” Derek said.

After the peace and raw beauty of Africa, Pinellas County, Florida, was a culture shock—but horses remained a familiar and comforting constant in Derek’s life.

“My first job in Florida was jump crew for the winter horse show circuit,” Derek said. “The Budweiser American Invitational awed me. I told the rest of the guys on the jump crew that I was going to ride in it one day. They all thought I was joking, even my boss, Rick Cram. I didn’t own a horse; I didn’t own a saddle—I didn’t own anything!”

That spark of awe would keep Derek motivated in the coming years. When the winter horse shows ended, Derek got a regular job building custom vans. All the while, he kept his eyes open and prayed for opportunities in the horse world. He found that opportunity in a classified ad for a working student at a 1,000-acre dressage farm in Wellborn, Florida.

“Jean Brinkman’s Valhalla Farm,” Derek said. “I worked there for four years. Eventing in Africa came in handy. I started building cross-country courses, one fence at a time in one of the fields. I wanted the dressage rejects to have a purpose and began training them to be eventers.”

His next job, at a small farm in Lake City, Florida, led him to the love of his life, Anita. “Her brother and I worked together at the farm,” Derek said. “One day, Anita came to visit. I was so angry with him for not mentioning he had such a beautiful sister!”

It was love at first sight. Derek and Anita were married for 30 years before he lost her in July 2021 to COVID-19.

“Getting started, we went through a lot,” Derek said. “When I was trying to break into the industry, training and selling off-track Thoroughbreds or breaking young horses, Anita would pitch in wherever she could. A lot of times I would need to go get another job. It was tough to make ends meet, but she always believed in me. Anita was my right hand behind the scenes. She’d tack, groom, clean stalls, help at the horse shows. She’d babysit other people’s kids to help bring in money. Anita rode a little bit, but she really dedicated herself to being a mother after our sons were born.”

What really propelled Derek’s business from “getting by” to thriving was importing European horses before it became commonplace.

“I mortgaged our home to finance the trip,” Derek said. “It was a lucrative prospect. I brought two horses back and the first horse’s sale covered all my expenses. The second horse was profit. It made sense to keep going back.”

On his fourth trip to Europe in 2000, Derek purchased a 17.1-hand, 6-year-old Holsteiner gelding with unknown parentage named Lemon Tree. “He was a big, good-looking horse,” Derek said. “He was a character! A little lazy with the hind end but with a powerful jump. I was offered $125,000 to sell him as an equitation mount after his first couple of shows, but I needed to think it over. I had recently been reading Genesis and Exodus in my Bible and had a dream that night from God. He told me this horse was going to take me to the promised land.”

Inspired by the dream to keep the horse, Derek renamed the gelding Promised Land. In 2004, the horse and rider team racked up wins in the Grand Prix. Each class and show brought Derek closer to the promise he made himself in 1986. Finally, Derek received the invitation he had been waiting for: to ride in the American Invitational in Tampa, Florida. He placed seventh in a tightly competitive field of Olympians and international show jumpers.

“My old boss, Rick, came up to me several times and congratulated me on accomplishing my dreams,” Derek said. “It changed our lives forever.”

Derek sold Promised Land to Christine McCrea for a lot more than $125,000 in 2004. The incredible sum allowed Derek to expand the family business by buying land, acquiring more horses and starting a breeding operation.

The Petersen family is tight knit, their shared faith gluing them together through the good times and the bad. Derek’s oldest son, Jared Petersen, and his wife, Jordan Petersen, are accomplished riders and help with not only the training at Legacy Farm but the day-to-day chores as well.

“Having a son that wants to continue the family business and take over is a blessing,” Derek said. “The work is never-ending, and it can be hard at times, but we get along quite well. It’s been really rewarding watching my kid come up and seeing him and Jordan be successful in the competition ring. The farm is in good hands!”

Derek’s younger son, Joel, is an actor, filmmaker and musician. While he doesn’t ride, he can be found pitching in with farm chores when he visits. Sunday is always for family, sharing a meal, spending time together fishing on their boat and studying the Bible at Christian Life Fellowship in Newberry, Florida.

“God is calling me to make a difference in the world—horses and showing is the vehicle,” Derek said. “I am open to what he has to say and sharing it. They are God’s horses, and we are their stewards.” 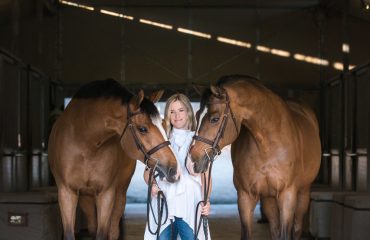 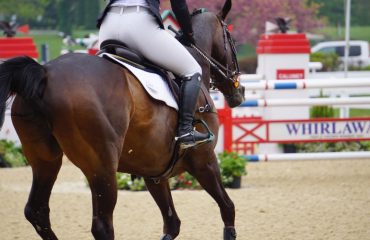 The Inner Voice of Fear