Wild and crazy are not the first words that pop into your mind when thinking about dressage—yet that’s what sometimes seems to happen during the evening of the Challenge of the Americas held in March each year in Wellington, Florida. It’s a classic example of dressage tossing its hat into the entertainment ring—and for a great cause.

The Challenge is the brainchild of Mary Ross and is a benefit for the fight against breast cancer. Mary was inspired to start it in remembrance of her mother. From its humble beginnings in 2002, it has grown into a major fundraising event that is livestreamed. I had the honor of riding in one of the original quadrilles. We were the lunch-time entertainment for the Palm Beach Derby at the Equestrian Estates venue. It has evolved over the years, one could say organically, from a single quadrille of six horses and their riders dressed in traditional competition clothes to a spectacle of several quadrilles with riders and sometimes horses dressed creatively, competing in front of a panel of judges. One of my favorite memories is the year my team rode to music from “The Greatest Show on Earth”. Horses and riders were dressed appropriately—we had a zebra, lion, elephant and, of course, the ring master. We were definitely a crowd pleaser!

Only a month apart from the Challenge, the FEI World Cup Finals, which is usually held in April, may not be quite as entertaining but is for many of us just as enjoyable to watch. While there are no costumes and only a single combination in the arena at any given time, there is still great music and some pretty spectacular riding. I’ve ridden in both. Although there’s no comparison to the thrill of competing in a prestigious competition and the honor of wearing your country’s flag, both can be rewarding and result in many fond memories. The camaraderie developed amongst the riders while practicing the quadrille week after week, the thrill you feel when it all works and all six of you are in step together, and finally the applause of the audience is incredibly rewarding—as it is when you do your final salute at the World Cup Final and you hear the applause and reflect back on the hours of training, the friends made, the unbelievable support of the people who helped get you there while you are hopefully thankful and feeling so proud of your horse.

Although both events mix music with horses and are dressage-based, they are of two worlds. For one, the primary purpose is entertainment for a worthy cause. For the other, the primary purpose is to determine the best athlete/horse combination, which is then enhanced with good music and choreography. It’s a crowd-pleasing way to showcase the top horses and athletes in the competitive dressage world.

Dressage is under pressure to broaden its appeal and draw larger audiences. The challenge for us is how to make that happen without sacrificing the principles of dressage. We have to be careful not to make entertaining the audience our number-one priority. I believe there are many ways dressage has quietly modernized over the years. For instance, recognition of riders as athletes, freestyles, accepted training techniques, allowance of snaffle bits in certain types of CDIs, better veterinary care, colors of jackets, I dare say better riding and the list continues to grow longer. The winning rides in dressage competitions should demonstrate an adherence to the established principles and fundamentals of dressage, resulting in harmony between horse and rider.

Mary Ross always had a high standard for the Challenge of the Americas. That first year, every one of us in the quadrille had represented our country in international competition. Later there were three quadrilles competing: U.S., Canada and International. Each of the teams was made up of an impressive list of riders who had represented their countries internationally. It has continued to grow: There were six teams this year. While not all of the riders have such credentials, Mary still strives to keep a high standard. In other words, even though the objective is primarily to entertain, the goal is to keep good riding as part of the equation.

George, second from left, said one of his favorite memories was the year his team rode to music from “The Greatest Show on Earth” at the Challenge of Americas.

In today’s world, the fundamentals such as harmony, quiet acceptance of the bit, willingness to go forward and ease of movements are even more important as our sport is increasingly scrutinized by the non-horse world. It’s the responsibility of all of us as horsemen and -women to present dressage and all equestrian sports in the best light we can. The Challenge of the Americas and the FEI World Cup Finals are very different from each other, but both are extraordinary events that do just that. 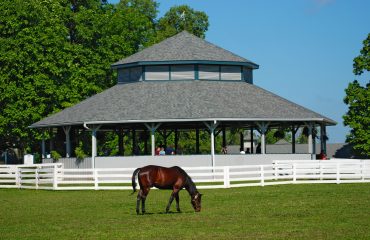 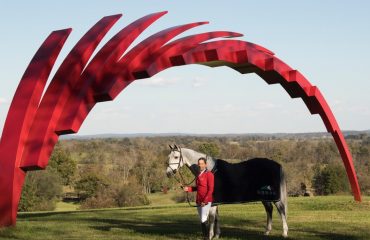 Laura Kraut: Making Her Own Magic 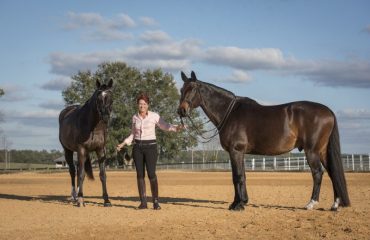