Haley Gassel: Show Jumping, Bodybuilding and a Passion for Excellence

Competitive edge: It’s what many equestrians have in spades. It’s a drive to do the best, to always do better, to keep improving. For show jumper Haley Gassel, the drive to compete keeps her always looking to and preparing for the next event, whether horseback or in the completely different world of competitive bodybuilding.

Haley and Quite Dark 2

Haley wasn’t your typical horse-obsessed little girl. Her parents, Wendy Graziani and Alan Gassel, encouraged her to try a variety of different sports and hobbies, from swimming and soccer to piano and dance. Wendy and Alan were approached by a good friend, Susie Lones, who asked if they’d ever considered getting Haley riding lessons. Once she started lessons around age 7, she never stopped.

“My first pony’s name was Topaz,” Haley said. “Believe it or not, she was a rescue from a local kill lot. She was young and green, and so was I!” Despite memories of being bucked off frequently, Haley and Topaz prevailed, earning the year-end Short Stirrup Champion and 2’ Equitation Champion with her local show association when she was 11.

By the time Haley was a teenager, juggling her different activities began to take its toll, until her parents asked her to choose a single sport — and the horses won. “There’s so much I love about show jumping,” Haley explained. “I really like knowing that I truly won or lost the class. I also love the precision and accuracy it takes to be successful.”

As a dedicated equestrian and committed horse mom, Haley, 26, is very particular about her horses’ care and fitness routine, which, unsurprisingly, matches her dedication to her own physical fitness, which brought her onto an entirely different and new stage — bodybuilding.

Haley took part in her first bodybuilding competition in October 2018

It was in 2013, after a series of unfortunate events, including the loss of her family’s home to a lightning-caused fire and the end of a long-term relationship, Haley found exercise as a means to cope with the stress in her life. She joined a gym, discovered Zumba and loved it so much she even taught classes for a few years.

But the urge to compete is part of who Haley is. “I’ve always had competition running through my blood,” Haley explained. “When my fitness goals kept growing, I kept competition in the back of my mind. I’m the kind of person who feels like competing is the ultimate goal, because if you’re not competing and trying to be your best, would you actually try and work as hard as you could?” As her journey with physical fitness continued, Haley learned about competitive bodybuilding, and it struck her as something that would allow her to compete in another activity that she loved.

Yet for a young adult living and working out of a camper half the year, bodybuilding initially didn’t seem to be feasible. There were concerns that others would jump to conclusions about her motivation, or would she be able to find the time to train during an already active daily regimen.

The inspiration Haley needed to push herself further came from a fellow equestrian. “One of the boarders, who is twice my age, walked into the barn with a cooler of food, and I asked her if she was meal prepping,” Haley said. “She told me she was training for a bikini competition and the lightbulb went off. If someone else can make that goal, I can too!”

That realization, along with some intense training and time, propelled Haley to her own bikini competition in October 2018. “I always tell people I’m in the short stirrup of bodybuilding,” Haley laughed. “It’s the lowest level of muscle. There’s muscle definition but not over the top.”

Her team of coaches, which includes Shea and Stacey RedHorse, knows the ins and outs of bodybuilding and helps her manage fitness and nutrition as well as the more technical side of the competitions, such as posing and the amount of muscle needed to compete successfully. “My first was like dipping my toes in the water,” Haley said. “My coaches and I agreed that it would be best for me to just go in and do one. My next one, I want to be incredibly competitive, and once I’m ready, I’ll know it!” Her goal is to compete again this fall, when her riding schedule is less strenuous and the cooler weather benefits her body’s ability to prepare.

Quite Dark 2, or QD, a 14-year-old Holsteiner, is the horse Haley credits with bringing her onto the grand prix stage.

For an already active equestrian, Haley has found herself stronger and improved when in the saddle as a direct result of her commitment to nutrition and fitness, which she needs to condition her three horses.

Quite Dark 2, or QD, a 14-year-old Holsteiner, is the horse Haley credits with bringing her onto the grand prix stage. Imported from Germany in 2013, he’s her attention-loving gentle giant. “QD always goes into the ring with 110-percent effort,” Haley said. “He wants to win every class just as badly as I do! He’s helped me accumulate multiple grand prix wins, show and gain experience at the FEI level and even carted me around my first 1.60m. He’s truly made me who I am as a rider today.”

Her younger horses are Hambesi, known as Hammy around the barn, a 7-year-old Royal Dutch Warmblood whom she’s enjoyed bringing along through the ranks; and her newest addition is Palou, a 4-year-old Belgian Warmblood imported from Belgium in January 2019.

Haley is stronger in the saddle as a result of her commitment to nutrition and fitness.

A lifelong Tennessean, Haley had the same trainer from her walk/trot/canter days to grand prix in Amanda Melton-Finger, who is based at Haley’s family farm, Westwind Equine Training Center in Friendsville, Tennessee. Since deciding to go on the road full time with her horses, she has the added benefit of training with David Jennings at Full Circle Farm in Franklin, Tennessee, and travels with David and his team to Ocala, Florida, during the winter months. “David has really taken my riding to the next level,” Haley said. “He’s the kind of trainer who will be very honest about your riding or situation but still be very positive and supportive. I’ve won big classes, but he can still tell me where and how I can improve, and I have a lot of respect for that.”

Haley likes to get her horses out of the arena and onto the hilly 38-acre property at Westwind, situated at the base of the Smoky Mountains, not only to give them a mental break from the arena but also to take advantage of the hills for conditioning. “We have some steep hills that the horses walk up and down to build their hindquarters and top line,” Haley explained. “We also have rolling hills all over the farm that sometimes I canter each horse on, which not only works their cardiovascular system but also different muscles they might not use in regular flatwork.”

Haley has learned to make the best of every opportunity she has, as well as using copious amounts of ambition and drive to manage her busy life. “I’ve learned we have one chance, one opportunity to make the life we want,” she said. “Imagining the person I want to become is enough motivation for me to show up, every single day.”

On top of riding and caring for her horses, traveling for competitions and training for fitness competition, Haley works for Taylor Harris Insurance Services; if that wasn’t enough, she’s also an online wellness coach, which allows her to pay it forward and help others reach their own health and fitness goals.

Balancing all these endeavors has simply made Haley who she is — a fierce competitor and multitalented individual who excels at sharing her passion for life. “I absolutely love what I do,” she said. “Even though I’m extremely busy and work almost every single day, I wouldn’t trade it for the world!” 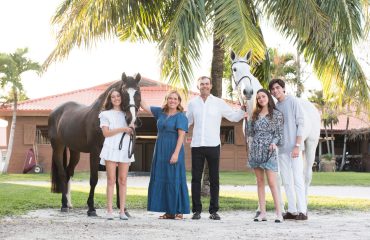 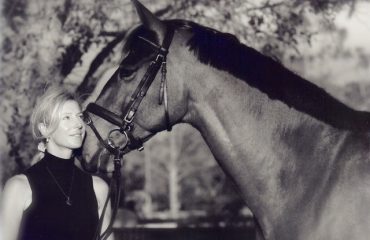