Many of us were drawn to dressage by the artistic ideal of striving to create such a perfect harmony between horse and rider that they truly merge and perform as one. Unfortunately, more often than not, we as riders fall short in this endeavor.

However, at the Olympic Games in Tokyo, there were some outstanding rides, which proves that this is not such an impossible dream after all. Harmony was perhaps best exemplified by not only Germany’s Jessica von Bredow-Werndl but decisively by our own Sabine Schut-Kery. The dressage world might have been surprised by Sabine’s seemingly sudden rise to the top, but those of us who watched her this past winter in Wellington knew of the wonderfully special connection between Sabine and Sanceo!

Recent weeks have been simply amazing for dressage, especially for U.S. dressage. It started in June with our Young Rider team winning the bronze in Germany at the Future Champions CDIOY Hagen. Next was the U.S. team with Adrienne Lyle, Sabine Schut-Kery and Steffen Peters winning the silver medal at the Olympics. A week later, it was followed up by Para Olympian Roxanne Trunnell pulling off an unprecedented gold medal in both the individual and freestyle, as well as a bronze team with fellow competitors Beatrice de Lavalette, Kate Shoemaker and Rebecca Hart.

It’s not like suddenly a switch got flipped and now we’re being noticed. These achievements are the result of solid preparation by the athletes, owners, grooms, each athlete’s personal support team, the US Equestrian team chefs and coaches, veterinarians, amazing staff, programs, and all of the private and commercial sponsors. There is a large financial and extensive organizational support system as well, which includes the USOPC, the USET Foundation, the US Dressage Federation, Discover Dressage and The Dressage Foundation. In other words, there has been a large commitment to attain this level of success made by many in our US dressage community. This is something for all of us to be proud of, all the while being appreciative of what our athletes accomplished and grateful for the generosity and spirit of the horses who truly made it happen.

In reviewing and reflecting on the Olympics, I’m excited to see how the sport has evolved. The natural athleticism of our horses is impressive, and with the proper gymnastic training we not only retained and increased their athleticism but also their ability and willingness to perform as asked. They truly become our dance partners. I was happy to see this in the Olympics, where it should be reasonable to expect it. I was thrilled to see it at the North American Youth Championships, where the winning athletes in both the FEI Junior and Young Rider divisions had not just great rides but harmonious rides. Most notable to me were the gold medal freestyle rides of Lexi Kment with Montagny Avon Der Heide in the Juniors and Christian Simonson on Zeaball Diawind in the Young Riders. It was on display again most recently at the Festival of Champions. There were so many good combinations competing in the 14 different divisions that I cannot name them all. Just a couple of highlights from my perspective were Maren Elise Fouchè-Hanson in the FEI Pony Team Test, Sienna Rowe in the FEI Children Team Test, Kat Fuqua in the FEI Junior Team test, Olivia Martz in the 13 & Under and Kasey Denny in the 14-18 Medal Final Classes.

Of course, dressage is not just about harmony. It’s also about rhythm, quality of gaits, suppleness, contact, connection, throughness, impulsion, balance, straightness, collection and the correct execution of movements (Whew!). The riders I admire most are masters of these things on horse after horse. The piaffes are of excellent quality—think 10—and the trot half passes—who does them better? And on horse after horse? They constantly have good bend, show a reach with the legs, and good transitions. On the world stage, Isabell Werth is truly at the top of the game. She is often referred to as The Queen: a well-earned title that no one can dispute. Charlotte Dujardin can make any competition exciting. Charlotte goes for it, giving it her all. Carl Hester is a master at riding a test, correctness by the book. It’s fun to see Catharine Dufour representing her generation so well.

The next generation of U.S. athletes and horses were on display at the Festival of Champions. This competition gives us a good sense of the current state of dressage and a glimpse of a promising future. I’d say there is a lot of talent, human and equine, in our ranks. It’s our responsibility to develop the horses and the riders correctly to help each to reach their maximum potential. I believe that keeping harmony as one of the ultimate goals will be key to their success. Judging by what I saw at Festival, it’s here to stay. 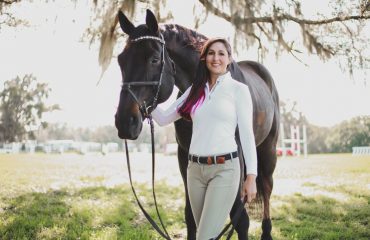 Haley Gassel: Show Jumping, Bodybuilding and a Passion for Excellence 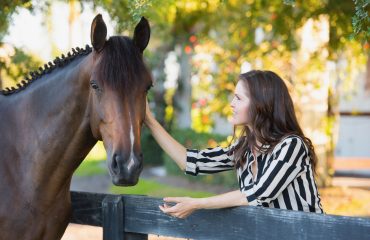