Lillian Heard grew up with riding sisters and her mother, Jaqueline, was District Commissioner for Seneca Valley Pony Club (MD).  Lill got her “B” rating, moved to Surefire (VA) to train with Jan Byyny and then became Boyd Martin’s right-hand person.  In the aftermath of the tragic fire that claimed the lives of six horses, including Lill’s Ariel, Phillip Dutton and Boyd sent her off to Ireland to Carol Gee, owner of Fernhill Sport Horses. Lill tried a lot of horses and got to know Carol, who offered her a job.  She wasn’t sure she wanted to leave True Prospect Farm’s eventing community, led by Phillip and Evie, but Boyd convinced Lill, 25, to take advantage of the golden opportunity.  She’s competing, learning by leaps and bounds even when young horses buck her off, and says: “This is going to make me as a rider.”

Sidelines:  Will you go foxhunting while you’re in Ireland?

LJH:  Carol was telling me the other day that if I learn how to ride around the country, then I can ride any horse around without falling off because they jump some crazy stuff.  I hunted a little in Pony Club, and I would love to try it here if offered the opportunity.

Lillian Heard and Share Option were 6th at the CCI*** 2010 Jersey Fresh. “Whitey” was at a friend’s farm, recovering from an injury, when Lill lost Ariel in the fire at Boyd’s Photo by Mike McNally

Sidelines:  Why is Pony Club so important?

LJH:  It teaches you to be responsible and respect for the horse while having fun.  We weren’t just out there going crazy with our ponies; Pony Club taught you all the lessons in horse care.  Even now, I use the knowledge I gained from Pony Club every single day.

Sidelines:  Do you wish you had done anything differently?

LJH:  Carol says all the time: don’t regret the things you do, regret the things you don’t do.  Being good at this sport is about being able to handle the good stuff, make mistakes and learn from things going wrong. I worked with Jan Byyny for years.  She’s so instrumental in my becoming who I am.  She pushed me and made me do it all through college.  I went to school, rode full-time and went to Aiken on the weekends.  She pushed and pushed: come on, you can be better.  I wouldn’t trade that.  Then, I moved to Boyd’s and learned from him and all the people at True Prospect.  I wouldn’t change anything.

Sidelines:  What’s the best way to move up through the levels?

LJH:  I’m a huge fan of young and amateur riders buying older, very experienced horses and learning on them, even though maybe that horse won’t win the dressage or has special shoes or you have to inject that ankle.  It might not be your ideal horse, but this horse will take care of you and teach you how to jump the big jumps and give you confidence.  If I ever have kids, my kids will have horses that have been there and done that.  I had a very lucky situation.  My sister’s five years older, and every time she got to the end of a horse, I would get it and she would get a new one.  The first time I inherited my sister’s one-star horse: I was maybe 14 or 15 when I first started going preliminary and this horse carried me around.  She was phenomenal.  She was older, not very good on the flat, but she made me love it, because she made it so easy to jump around a preliminary track.

When my sister finished college, she decided to give up riding and I inherited the horse she trained up to two-star.  The horse wasn’t super-sound, so I never wanted to do a two-star.  I rode that horse for two years and got to run around every Intermediate track on the east coast.  The horse was a machine and would jump anything I put in front of it.  Once again I got confidence.  I was lucky.

Sidelines:  What advice do you have for aspiring event riders?

LJH:  When you’re working your way up, you have to ride the horse you love to ride.  If it’s not fun and it scares you, sell it or stop leasing it.  Find a horse that makes you love what you’re doing so that you come off the course and the adrenaline’s pumping through you and you’re so excited you’re about to cry.  That’s the horse you need to ride.  You’ll learn to fly. 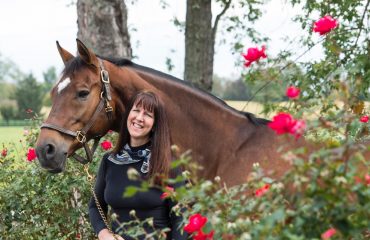 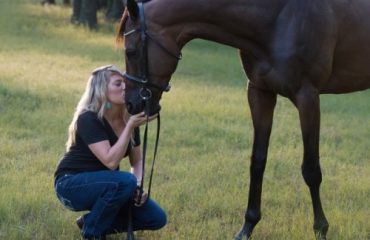 Caitlin Brady: Meant to Be