The majesty of our equine athletes, the intensity of a final match, the elation of a game well played……these are the moments which matter the most  and the images that polo photographers strive to capture from the sidelines of  polo fields around the world. Splitting his time between the fields or Argentina and Wellington’s International Polo Club Palm Beach, polo photographer Mark Crislip has made a career of capturing these moments.  A player himself, Mark has created a distinctive and extremely personal style with his work behind the lens.  With a knack for capturing emotional highs and the fluctuating intensities during the high-goal seasons both here and abroad, Mark is becoming a prominent figure on the polo scene.  Sidelines caught up with Mark in Argentina during the opening matches of the Argentine Open to visit about his passion for polo and notable subjects captured by his lens.

"Samurai." Adolfo Cambiaso slashes at the ball during the finals of the 2011 Tortugas Open, the first leg of the Argentine Triple Crown.

Sidelines:  What do you love most about playing polo?

MC:  Without a doubt what I love most about polo is the sense of pure excitement that courses through your entire body when you’re with your mount and racing down the pitch.  Speed is mixed with danger and it produces emotions that are very primal.  It’s not a feeling that I’ve ever felt playing any other sport.  I remember the first time I rode a roller coaster as a child.  At first I was scared to get on and then as it lurched forward I was terrified.  I wanted to get off but of course I couldn’t.  Before I knew it everything was happening at once.  Things were zooming as we were tossed left then right, up then down.  I was hanging on barely in control and the sensation was amazing.  Getting off, I was laughing uncontrollably.  Everything tingled.  I wanted to do it again!  Playing polo is the closest thing I’ve come to in recapturing that feeling as a child.

Sidelines:  What is the most meaningful polo location to you?

MC:  That’s an interesting question.  I would have to say the Hurlingham Club in Argentina.  It’s such a beautiful venue with so much history and the Hurlingham Open takes place just as the weather is on the cusp of warm and cold.  The flowers are starting to bloom and the late games end as the sun sets behind the brick scoreboard.  The combination of a crisp early evening, beautiful grounds, crimson skies and the best players in the world makes for some spectacular opportunities for shots.

I remember semis there in 2010:  La Dolfina against a strong La Aguada team.  Cambiaso’s team as a whole was in turmoil and two of the players, Lucas Monteverde and Lolo Castagnola, were out; Lucas because of penalties and Lolo because of the flu.  I was standing with the petiseros (grooms) and with replacement players; La Dolfina was losing badly (12-5 I believe) late in the game.  Cambiaso looked beaten, down such an impossible deficit.  Then after a cloudy day the sun peaked out of the west and Cambiaso put his head down and did nothing for about 30 seconds.  And then the most amazing thing happened.  Cambiaso looked out onto the field, grabbed his mallet, went out for the seventh and scored a couple of quick goals.  He came in to change horses and you could feel a buzz in the air.  Could it be?  A couple more goals and the petiseros were starting to go crazy.  “Vamos Loco!!  Vamos Loco!!”  He scored goal after amazing goal and in just two chukkers tied the score and scored the winning goal in overtime as darkness descended upon the field.  It was electrifying.  Magic always seems to happen at Hurlingham.

Sidelines:  Outside of polo, what other interests and hobbies do you have?

MC:  I’ve always tended to be curious about things and I’ve always had too many things that I love to do.  I’ve always loved photography.  My father had dozens of cameras, mountains of gear and was a great photographer.  Everything I’ve learned comes from him being his apprentice.  He loved to talk about light and composition and those are the lessons that stick with me to this day.  But I left photography for a period in my life.  In graduate school I was obsessed with creating mathematical models of the causes of war.  I once decided that a lasagna could have any flavor you wanted it to, so I set off to make every strange variation I could think of.  The red curry panang lasagna was surprisingly good, though the one made with lemongrass and coconut milk was a bit of a disaster.  I’m quite a good Scrabble player and decent at chess.  I’ve also had my paintings (brushes, paint and canvas) represented at a gallery in Washington, DC.  Of course, my greatest passion is traveling and exploring.  I love to go to a new country and really get to know it and lists of things to see before I die are of no interest.  To me listening to the little old Italian ladies gossip about the neighbors outside my window late at night is far more interesting than seeing any statue or painting.

"Young Gun." Nico Pieres shot during the semifinals of the 2011 US Open. Along with his brother Gonzalo, they defeated a Zacara team that included his brother Facundo. "The amusing thing is that seconds before I was commenting to a friend that I hadn't gotten a single decent shot of Nico the whole tournament—it was about then that he started his run up the field and took the ball end to end."

Sidelines:  What do you hope to convey most with your photos?

MC:  In that way, what’s most important to me is actually putting you into the game with my photographs.  I am not a photojournalist and the images I create are far from ideal for newspapers and sports magazines. If you look at my photos you’ll notice that there’s a very tight crop.  I want you there.  I want you to feel what the player is feeling.  I want you to have a sense of what the game is like.  It doesn’t matter to me that you can’t tell that Adolfito or Facundo is putting in the winning goal at some important tournament.  To me it’s not about relaying information, but rather conveying emotion.

Sidelines:  If you could follow one polo player around the world, who would it be and what would you hope to capture through your lens?

MC:  This is rather easy to answer.  I think the most interesting players are those who have enormous raw talent but have yet to master it completely—those who are on the threshold of greatness.  Right now I think Nico Pieres is very interesting to watch and so is Hilario Ulloa.  In one moment they will do the most amazing things but seconds later make foolish mistakes.  Inconsistency is interesting.  Recklessness is interesting.  Growth is interesting.  I think that the process of potential being realized would make for an extremely interesting project.

"Flying Pigtails." Shot during the 2010 Ladies Polo World Championship at Puesto Viejo Polo Club in Cañuelas, Argentina. The shot shows Yamila Natacha Ruano of Chapaleufú II in a preliminary round matchup against Chapaleufú I. A number of Argentine women players sport extremely long pony or pigtails, with braids reaching all the way down to the belt. 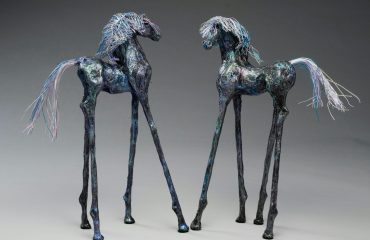