Sarah Lockman and First Apple, owned by Summit Farm, are on the short list to ride on the United States Dressage Team at the Lima 2019 Pan American Games.

Sarah Lockman has always been one to set goals. While only in Pony Club as a girl, she knew that she wanted to one day represent the United States on an international level.

So when she caught the eye of Olympian Debbie McDonald at her first CDI event, it was a breakout moment. “She followed me and said, ‘Who are you and where did you come from?’” Sarah recalled. “In front of my clients, she said, ‘You’d better say goodbye, she’s coming with me!’”

And go she did, taking the opportunity of a lifetime to train at Debbie’s facility in Idaho. That special “pinch me” moment was just the beginning for Sarah, whose years of hard work and dedication had finally brought her out of the shadows and onto the main stage. Now she and Summit Farm’s First Apple have made the short list to ride on the United States Dressage Team at the Lima 2019 Pan American Games, and it’s everything she had hoped to accomplish.

Pursuing international dreams with Apple is a far cry from Sarah’s first pony. Copper the one-eyed pony was found in a Penny Saver ad by Sarah’s father, Don, when Sarah was only 3. As a newbie in the horse world, her enthusiastic dad thought the package deal of the pony with its tack for $500 was a great deal. Little Sarah agreed, of course, but she laughs when she recalls the memory of her mother, Francie, who cried — not happy tears — when she saw that pony.

“My mom was the only horse person in our house, and she didn’t even know how to put on Western tack,” Sarah said.

But that pony began a love affair that could not be tamed. Her parents recognized and supported Sarah in her passionate pursuit of all things equine, and soon found a local horsewoman, Suzie Quillen, who coached Sarah throughout her childhood riding career.

Sarah moved to Southern California when she was 16 and soon discovered that dressage was her calling.

She began with Western events like showmanship and Western pleasure, then joined Pony Club, where she discovered she wanted to try jumping. That quickly led to the adrenaline-pumping sport of eventing, where Sarah had an impressive and successful time riding off-the-track Thoroughbreds that she and her sisters would train and show. “If they were good, we’d keep them ourselves and compete them,” Sarah explained. “If they weren’t what we needed, we sold them. That’s how we funded our own careers.”

Kristi Nunnik coached Sarah throughout her eventing career, and Sarah would spend summers living in a tent in front of Kristi’s house. At only 15, Sarah finished third at her first CCI3* competition, then spent a year working for Derek and Bea di Grazia, when Derek was still the eventing Young Riders coach. At 16 she moved to Southern California, working for David Wilson at W Farms. She had taken her eventing horses with her, but it was there that Sarah’s focus changed.

“After getting to experience top dressage horses, I decided dressage was my calling,” Sarah said. “I sold the eventing horses and I’ve been strictly dressage ever since!”

Sarah is certainly proving herself correct in that calling, and she’s ridden enough horses in her 30 years to know it. “It feels like I’ve ridden a million horses,” she said with a laugh. There was her Pony Club mount, Rosie, whom Sarah described as the naughtiest pony one could possibly have; the numerous Thoroughbreds like Albert and Mr. E she competed with, trained and sold; and during her business tenure, she had as many as 50 horses in the barn.

Sarah, walking across the dressage ring at Summit Farm, trains with Scott Hassler, who has been a source of inspiration and support for Sarah since he first saw her riding at one of his clinics.

It was during that time that Gerry Ibanez found an internet ad, called her and asked her to take in a Friesian he had bought sight unseen except for a sale video. Sarah, who was never one to turn away a potential client, agreed. She didn’t know it then, but she had just met her future sponsor.

Over the next few years, Sarah continued to train, teach and sell horses. Gerry had told her to let him know if there was anything he could do to help her pursue her goals, which she appreciated. It wasn’t until she was in Europe searching for potential mounts and found a horse she liked that she learned just how serious he was. “I thought, Well, I’m going to call a couple of clients and set up a syndicate. Gerry was the first I called and told about the horse. It was terrifying!” Sarah said. “That horse didn’t work out, but that started the whole conversation of, ‘If these are your goals, let’s talk about what it takes to get there.’”

In yet another twist of fate, the barn where Sarah based her operations tragically burned down during the Anaheim Hills fire in 2017. Though heart-wrenching, with her horses displaced and the barn gone, it allowed Sarah and Gerry to search for a place that would allow them to advance both their dreams. They found such a dream facility in Summit Farm, in Murrieta, California, which sits on 22 acres and has a classic, Wellington-esque feel to it.

Gerry, who had been impressed with Sarah as her client, purchased the facility, then appointed Sarah lead rider. The position — which allowed her to switch gears from training for others to competing herself — gave her a goal achieved, with new goals to set.

What once seemed like a far-fetched dream has steadily become a promising probability for Sarah, who has an amazing string of competition horses owned by Summit Farm. Coincidentally, that string includes Taling Van De Oostwal, the Friesian that Gerry originally sent to Sarah for training.

“The horse has a super canter, huge extended trot and he’s really forward for a Friesian,” Sarah said. “He’s a very athletic, willing guy. Gerry rides him and takes him on trails. Last year I did something fun, and took him to the Friesian World Cup in Las Vegas!”

And of course, there’s First Apple, the horse now on the short list for the Pan Am games, who was purchased from Carolyn Kooiman’s President Dressage Stables. “He’s super talented, sweet and loving and a total gentleman,” Sarah gushed. “This horse and I, we just spoke the same language when I went to try him. The first two rounds around the ring, I started crying and said, ‘This is the horse!’”

Patrick van der Meer developed Apple toward the grand prix level, and Sarah spent a month with him in the Netherlands to train and get to know the stallion. “The best thing about Apple is how much he enjoys the work, and always tries to please me,” Sarah said. “We have such a deep connection. It’s special and hard to describe.”

Both Sarah and Gerry put special thought into developing a team for the long term; a team of horses at varying stages to allow their program to thrive for the foreseeable future. Thus, rounding out the rest of the string is Balia, a 7-year-old Westphalian mare; Calimero, a 10-year-old Holsteiner gelding; Jupiter, a 5-year-old Dutch Warmblood gelding; and Dehavilland, an 8-year-old Oldenburg gelding.

Sarah is now loving life, living her dressage dreams that began to come true when she was noticed by Olympian Debbie McDonald.

Along with an outstanding work ethic (think 15-hour days and unending dedication to the cause), Sarah has been blessed with supportive coaches, family, clients and even fellow competitors. Her current coach, Scott Hassler, has been a source of inspiration and support since he first saw her riding at one of his clinics.

“When I first saw Sarah, I was the USEF Young Horse Dressage Coach,” Scott recalled. “She looked like a real natural, with beautiful balance. She was effective but not restrictive, with a tremendous feel for the horse.”

Their paths continued to cross as Sarah attended his clinics, and eventually she called him, asking him to host a clinic in California. Initially declining, Scott thought about it, called her back and they agreed that he would come out to coach Sarah alone. She impressed him with her drive, riding 15 horses in one day and taking advantage of every minute.

Scott continues to fly out to Sarah’s home base at Summit Farm to coach. “It’s an entirely different game to ride at this level,” Scott explained. “Now she’s really getting polished, and she’s poised. Sarah’s effective yet quiet, graceful, elegant. She’s developed beautifully.”

Certainly, one of Sarah’s most adamant supporters is her sponsor Gerry, whose unassuming yet competitive nature and own love of horses has played a special role, not only as Sarah’s sponsor but also in bringing talented dressage horses to the United States and representing the U.S. in international competition. “We want to get to Peru,” Gerry said. “We’re super enthusiastic that we’ll make that. Sarah and the horse have shown consistency. We’re scoring at the same levels at every show. The horse is incredibly well-mannered, sound and level-headed. We think we’re the best contender to represent the U.S. there.”

Gerry and Sarah, while preparing for the possibility of Peru, are maintaining their commitment at developing their horses for a long-term program. “We want to continue demonstrating that we are the right team,” Gerry explained. “We have Apple, but he isn’t the only horse we feel capable of doing this with us. We also have Balia, who is incredibly talented. How we got two talented horses is amazing to me; we’ve been very fortunate!”

Now known around Southern California’s equestrian scene, Sarah firmly has her sights set on Peru. “It’s been a childhood dream of mine to represent the U.S. internationally, and I feel so blessed to be able to do that with such a special horse,” Sarah said. “It really makes all the years of hard work, blood, sweat and tears seem worth it.”

“I saw she had the drive, focus and talent to do this,” Gerry said. “She’s a tremendous rider. If I was to describe the thing I like the most, it’s her work ethic. Without that, nothing else would work.”

With each goal checked off, Sarah is one step closer to reaching her dreams, and she’s extremely grateful for the ride it’s been. “Hard work does pay off and dreams do come true!” Sarah said. “I hope my story gives other young equestrians the inspiration to work hard, and that even though they say it’s not possible, miracles happen and hard work, honesty and intense passion for the horses and the sport will be rewarded.” 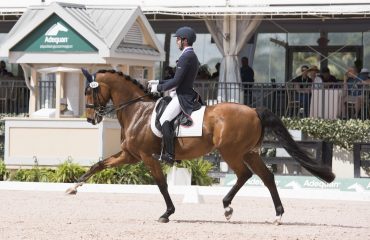 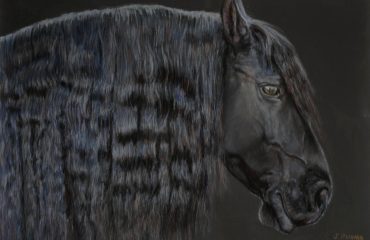 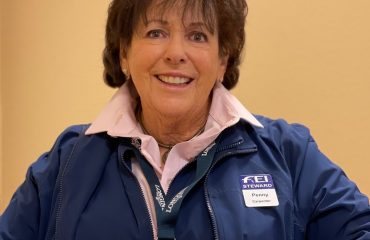