Sir Sinclair and the Legacy Stallions of Iron Spring Farm

Sir Sinclair, Keur, had an exceptional year as a sire. He won the Get of Sire class at the prestigious Dressage at Devon breed show for a record fifth time. He was awarded the Keur predicate by the KWPN and his oldest offspring are winning at Grand Prix, including the U.S. Dressage Finals Champion, William. Sir was also the number one ranked sire of dressage horses by the United States Equestrian Federation at press time.
Photo courtesy of Iron Spring Farm

Last February the Royal Dutch Warmblood Studbook (KWPN) awarded Iron Spring Farm’s Sir Sinclair the prestigious Keur predicate, the only living North American stallion to have this honor. To receive Keur, a stallion must have been successful at the FEI level, and his offspring also must compete at the highest levels and have exceptional conformation.

With more than 30 sons and daughters showing at the FEI levels in dressage in the USA alone, Sir clearly exceeded the requirements. William, Warina, Westerstorm, Zuperman and Zatino H have won at Grand Prix.

At press time, Sir Sinclair was ranked the number one dressage sire by the United States Equestrian Federation (USEF). At the prestigious Dressage at Devon breed show, Sir Sinclair made history when he won the Get of Sire class for a record fifth time.

“When you select a stallion for your breeding program, you hope they’ll produce the temperament, soundness and athletic ability you desire,” explained Mary Alice Malone, owner of Iron Spring Farm. “As the oldest offspring reach FEI, a stallion can be confirmed as a legacy sire.”

From the start, Sir Sinclair showed great promise. His world-class bloodlines, Lord Sinclair x Flemmingh, Preferent, along with his stallion test scores earned him a place at Iron Spring Farm. He won the Markel/USEF National Championship for Six-Year-Old dressage horses and the USDF Six-Year-Old Horse of the Year award, before progressing to Prix St. Georges with scores in the 70s.

“I like stallions that produce all-around athletes,” Mary Alice stated. “As a breeder, you want to produce exceptional individuals.”

Another Iron Spring Farm legacy stallion is Contango, Preferent. At press time, he was ranked the number two sire of dressage horses by the USEF. Contango’s many 2015 winners included Beyonce, ridden by Gwen Blake to two championships at the GAIG/USDF Region VI championships. The pair scored a 70.855 percent in Prix St. Georges and a 74.700 percent in the Intermediaire I Freestyle. Tennyson ISF, with his amateur rider Suzie Halle, won seven Grand Prix classes in 2015, including the Rocky Mountain Dressage Society Adult Amateur Grand Prix Freestyle.

UB40 is one of the most popular KWPN stallions in North America. His oldest offspring are winning Grand Prix in Europe.
Photo by Terri Miller

Another Iron Spring Farm leading sire is UB40, currently ranked eighth as the sire of dressage horses by the USEF. His progeny includes Eye Candy, the Second Level AA Freestyle Champion at the US Dressage Finals with a score of 76.33 percent with rider Amy Gimbel. The pair also was Reserve Champion Second Level AA.

UB40’s oldest offspring demonstrate why he’s one of the most popular sires in North America. His son Apache made his international Grand Prix debut with four wins and scores as high as 78 percent and was immediately named to the Olympic Dutch A squad. Alain Delon SB, a UB40-sired gelding, scored well in European Grand Prix. Bejing A, with teenage rider Alexandra Dominguez, won multiple Prix St. Georges and Intermediaire I classes and competed in the 2015 Pan American Games.

Teade is a prolific sire of Friesians winning at dressage and breed shows.
Photo by Terri Miller

Horses like Sir Sinclair and Teade are part of Iron Spring Farm’s 40-year commitment to the Iron Spring Farm American Advantage. By providing proven bloodlines, along with exceptional service, transparency and impeccable veterinary care, the Iron Spring Farm team helps breeders get their mares in foal. Ongoing expert advice and tools are also available so breeders can develop and market their offspring to the highest level.

Caravella, by Contango, and Megan Lane represented Canada at the World Equestrian Games and finished in the Top 10 at Aachen in 2014.
Photo by Susan J. Stickle 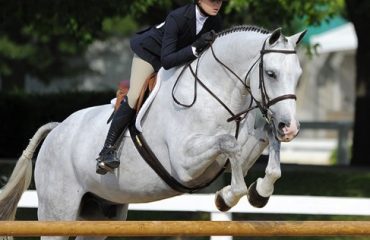 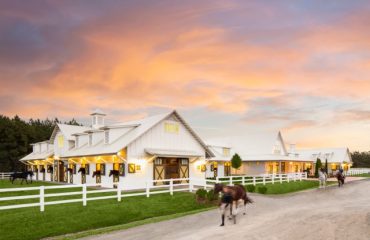 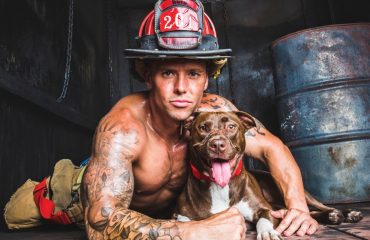