Dressage rider Stephanie Hartigan has a unique perspective on life and the horse sport world, having worked her way up from riding others’ horses in her native Germany to showing, training and breeding her own horses in Alpharetta, Georgia. She takes a well-rounded approach to everything, from balancing home and work life to training horses in both dressage and jumping with show jumper husband Glenn Hartigan at their own Eurimports Equestrian business.

This Tall To Ride

Stephanie grew up in Siegburg, Germany. She tried many hobbies, but dancing or playing chess just didn’t cut it. “My cousin had a horse, and my parents began to measure me every year to see if my legs were long enough to also take riding lessons,” Stephanie recalled with a laugh. “It took me until I was 12 and my parents decided that I was tall enough to start riding horses and I’ve never stopped.”

Despite their encouragement and support, Stephanie’s parents were unable to afford a horse of her own, but she didn’t let that stop her. She began grooming at the barn, determined to work up from there. “In Germany, you begin grooming horses and waiting for people to finish riding so you can hop on a horse and, when you spend a lot of time in the barn, you hope when the owner goes on vacation you can work the horse!”

Call it luck or fate, by the time Stephanie was 16, she was riding and taking care of two horses for a kind dressage judge. “She was very busy with her job, so she was often away and I could ride her horse,” said Stephanie, “And when she came back on the weekends she trained me on her horse. That was actually the beginning for me to really enjoy the riding and the sport because I had a very well-trained horse, and somebody that had a personal interest in me and my development. That’s how I started, and I’ve stuck with it.”

Stephanie continued to ride to some extent through college and various jobs, both as a licensed social worker and in the pharmaceutical industry. She discovered that she enjoyed working with and developing young horses. She also liked teaching, but it was a long road to be able to teach in her home country. “In Germany you can’t teach if you’re not licensed. You’re required to have specific certifications to get your trainer’s license and, if you want to show, you have license-klassen, which means that you have proved yourself to be good enough to show to a certain level. I developed my skills along the way and got my trainer’s license when I was 24,” Stephanie explained.

“Even though I preferred dressage, prerequisites for the license included having a lunging certificate, jumping up to 1.20m, teaching jumping, riding cross-country, and candidates were also expected to have achieved a bronze level in competition. Teaching dressage to Third Level was also required.”

The course of Stephanie’s life changed when she attended a horse auction with a friend in 2007. “We didn’t find the horse we were looking for, but my girlfriend wanted to stay for the after-hours party,” Stephanie said. Although Stephanie had to be up by 5:00 the next morning for her pharmaceutical job, she agreed to stay for half an hour before driving the four hours back to her home in Dusseldorf.

“Glenn Hartigan was at the after-hours party with his friend, and we started talking,” Stephanie said. “I had a blast that half hour and the conversation ended with Glenn asking if he could take me out for dinner before he went back to America. I said, ‘Okay, let’s do dinner on Wednesday.’”

That dinner never happened. “On Wednesday I didn’t have a lot of time, so I actually called him and cancelled. I suggested that perhaps we could get together another time when he was in Germany. I told him that the week had been a little crazy and I didn’t know if I could really have dinner with a guy from America. Glenn was so polite and so nice when he said ‘It’s not a problem; we can meet another time,’ that I hung up the phone thinking, ‘Aah! He’s such a nice guy! And I’m going to call him back and ask if he wants to have breakfast on Friday.’”

Over breakfast that Friday, Glenn invited Stephanie to go to the World Cup Finals in Las Vegas. Stephanie summarized, “And I went to Vegas; we spent four days together and, two weeks later, I moved in with him, and after five months we got married.”

’Til Death Do They Partner

Glenn and Stephanie created Eurimports Equestrian, where they work together to teach lessons, train horses for selling and showing, and even do a bit of breeding. “We’re both very independent,” Stephanie explained, “which means we do our own thing but we do help each other. I can help him with his horses on the flat and he helps me with my horses from the ground. We share the training of our clients. They have at least three flat lessons in a week, and have their jumping lessons with Glenn.

“At the big shows, if possible, I go to groom Glenn’s horses or to support the groom. If I’m going to a show, Glenn trailers my horses. I’d rather groom them myself,” Stephanie added with a laugh.

Embracing each other’s strengths, Glenn and Stephanie have developed a program that incorporates both dressage and jumping. “Both sports and disciplines complement each other,” Stephanie feels. “If a rider can’t ride a good circle or shorten or lengthen a horse’s stride, they’ll never be able to ride a good distance in the jumping ring. Our dressage horses all jump at least once a month and we do a lot of cavaletti work. Horses’ brains need to be challenged and riding all circles all day long is not good for them.”

Contributing to this perspective is Stephanie’s experience in Germany. “I’d like to see more cooperation between the dressage and jumping disciplines,” she said. “In Germany, you often have a jumping show and a dressage show at the same venue at the same time. The only time of year we can compete together is in Wellington, where the venues are close to each other.”

Stephanie’s son, Connor, rides beside her and Clever on his pony, Maple.
Photo courtesy of Stephanie Hartigan

As if excelling in the roles of riders, trainers, business partners and spouses isn’t enough, Glenn and Stephanie also share the responsibilities of parenthood. Their son, Connor, is 7 years old. “Having a child is challenging, but it’s the best thing that’s happened in my life,” Stephanie said. “It requires a lot of organization to ensure that certain things are done before Connor gets home from school.”

As with their business, Glenn and Stephanie share parental responsibilities and lesson schedules are arranged so that each of them is able to spend quality time with Connor on a daily basis. Stephanie describes it as a challenging but rewarding lifestyle.

Another aspect of the business that’s rewarding is the Eurimports breeding program. Their first-born foal, Coco, is now 8 years old and placed in the top 10 in her first two Grand Prix in 2015. Coco’s full brother, Clever, is becoming a quality dressage horse. He began his dressage career in 2015 and achieved scores in the mid-60s and high 70s and won several high-score awards. Clever finished the 2015 season being named the Holsteiner of the Year in his USDF division. Stephanie explained, “I just started him last April and I think he can be my Grand Prix horse. I hope to have him ready in three years. My goal is to compete at the highest levels again within the next five years.”

As she moves forward toward her goal of competing at the Grand Prix level once more, Stephanie continues to exemplify the balance and partnership she hopes others will also come to embrace.

For more on Stephanie and Eurimports Equestrian, go to www.eurimports.com. 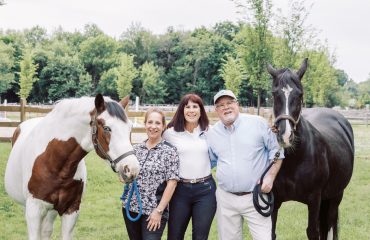 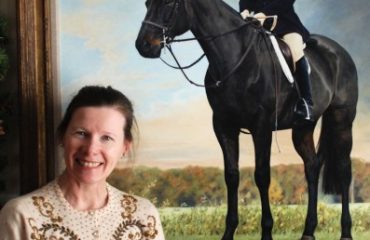 Anita Baarns: Every Portrait Starts With the Eyes 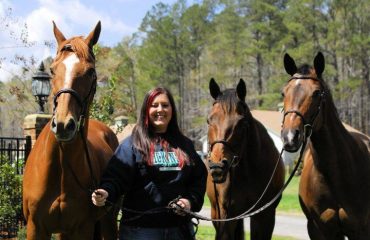