At the Totally Thoroughbred Horse Show at Pimlico Race Track in Maryland this past July, a young bay gelding named Atom was there mainly to gain experience. It was only his second show and his owner was focusing on her jumper who was competing in the $7,500 Jumper Speed Stakes, so she asked a friend who had never ridden Atom to show him.

The new rider didn’t bother Atom, he had already beaten the odds simply by being there. He’d been the last horse left in the Camelot Auction and was destined for the killers, but was saved at the eleventh hour. Although he had shown potential during training, he wasn’t expected to do well. But that weekend he placed third in a class of over 30 entries, then fifth in the Hunter Stake with over 50 entries! And just to top it all off, he went on to place third in the hack class.

Looking back at Atom’s life thus far, his performance at the show wasn’t really surprising because the rest of his story of how he was lost, then found, seems more like a Disney movie than reality.

Saved by Social Media
They say you can tell so much about a horse by his eye.

Atom’s photo from the Camelot Auction.

The portrait of a bay Thoroughbred gelding at the Camelot Auction, hip #415 in February 2012, shows kind eyes in a friendly, almost pleading face. He looks calmly hopeful that he’ll be redeemed from the kill pen.

His picture had a long list of comments on the Camelot Horse Weekly page on Facebook. Karen Benson, a former racehorse exercise rider who now rides and shows jumpers, and Carolyn Jacobson started a conversation about the bay gelding. As time passed and he was the last horse left, Carolyn commented to Karen, “I’ll bail him out if you can find a home for him.”

Karen was stunned by the offer. “Except for being Facebook friends, Carolyn was a perfect stranger that I didn’t even know,” she explained. “I thought it was just amazing that she was putting up the money for a horse!”

Research of his tattoo indicated that he was by Royal Academy out of Araadh, by Blushing Groom — a well-bred horse foaled in 2007, and that his name was Atom. Karen explained to a friend and neighbor about Carolyn and her willingness to pay to redeem the horse if she could find a home for him. “So my friend and I decided to take him and we worked out a deal that I’d do the training on him,” Karen said. “And my friend would keep him at her farm because I didn’t have space.” With those plans in place, Karen immediately called a shipper to bring Atom down to her home in North Carolina from New Jersey.

Karen was excited about starting his training but within a week, a high fever and symptoms of strangles set in. Although the vet’s cultures weren’t positive for strangles, precautions were taken and Atom was isolated from other horses on the farm as he slowly recovered.

“He was sick for quite some time, and it left him anemic,” Karen remembered. “He got better and when we started riding him he was really sweet and quiet but as things further progressed he could throw quite a tantrum. He decided he didn’t want to canter so he would buck.”

Although Atom had a “bratty” side, he showed real jumping potential, so Karen persevered. “When we got to jumping, he showed incredible jumping talent; he over-jumped everything,” She said. “The first time he jumped a cross rail, he was like 4 feet over it, taller than the standards.”

His talent impressed Karen to the point that she bought out her friend and brought Atom home to her farm to continue his training there. She took him to a show to see how he’d do. “His first horse show was the Thoroughbred Celebration in October 2013. It was a huge show and we just wanted him to jump around,” Karen said. “He jumped so nicely that he ended up getting a fifth out of 45 horses and qualified for the $1,500 Stake at his first horse show!”

Lost and Found
A few months later, Off-Track Thoroughbreds.com, a publication of the Thoroughbred Retirement Foundation, wanted to run a story on Atom. Karen went back to the Camelot Facebook page to find the photo of him from the auction to include in the story and was surprised to see additional dialogue about Atom. “I found his picture then I saw all these comments about him, asking if anybody had seen the horse and that they knew his name was Atom,” Karen remembered.

The most notable comment was posted over six months after Karen got Atom. It was from Rebekah Veitch who wrote: “I was wondering if anyone knew what happened to this guy. I used to take care of him when he was in training and even brought him home for a little while. But unfortunately I am a broke college student so I had to give him up. It was the hardest thing I have ever done. I trusted the wrong person and this is where he ended up and it breaks my heart. Please, if anyone has any information on him and would be willing to share it with me I’d be so grateful. I love this boy with my whole heart and I’ve prayed to God every day that he’s ended up in a good home.”

Karen responded to Rebekah’s post and she found that Atom had been given to Rebecca while she was at college in New York. Although he had quite a mind of his own, Rebekah loved the bay gelding but sadly couldn’t afford to keep him. Just before she left school for a family visit, she placed Atom with someone who promised her he could find a home for him. Upon Rebekah’s return to school a few weeks later, the man she had trusted to help her find a good home for Atom was nowhere to be found, and of course, Atom was also gone.

“Nobody would tell her where the horse was and since the guy had disappeared and it was the end of the school year, she went back home and never knew where the horse went,” Karen said. “She was absolutely heartbroken over it.” It wasn’t until one of Rebekah’s classmates saw Atom’s picture on the Camelot website after he had been placed with Karen that she found out Atom had ended up in the kill pen. It wasn’t until July 2013 — over a year later — that Karen contacted her to say that she had the horse.

It turns out that Rebekah’s distant uncle is the famous racehorse trainer John Veitch. Karen laughed when she explained that she used to ride horses for John when she was younger. “Rebekah kind of reminds me of me; she’s galloping horses at the tracks in Saratoga and Kentucky,” Karen said. “She goes to Ocala and breaks yearlings and on her way down she stops and sees Atom and stays with me in North Carolina at my house. She’s just so happy that this horse has found a home and that we’re friends. Rebekah has written letters to Carolyn Jacobson who put up the money for Atom, thanking her for saving him and we all are staying in touch.”

Time to Grow Up
Although Atom did well at his first show, he could still pull his “bratty moves” and Karen made a decision last year. “I told Atom, ‘I’m going to devote 60 days to you and you’re either going to shape up and be a nice horse or I’m going to end up selling you to somebody that’s younger,’” Karen said. “I galloped race horses for 13 years and I don’t need to be doing all this now.”

While keeping Atom in jumping training, Karen added trail riding to his program. “All last summer, I took him to the mountains and tacked him up western. I just really put a lot of time into him and he basically grew up. We have a cowboy town here called Love Valley. It’s horses only there; it’s a western theme where you ride horses into town,” Karen explained. “There’s everything there — wagons and donkeys — and if your horse is Love Valley broke, he’s real broke. It’s near my former home in Mooresville, North Carolina, 30 minutes north of Charlotte. I’ve since moved to Tryon, North Carolina.”

Karen’s focus on Atom’s training has paid off, and his jumping form is phenomenal. “He’s definitely a hunter, he’s so good with his knees,” Karen said. “I’m more of a jumper person. He doesn’t want to go fast; he’s kind of lazy — that’s when he used to throw his temper tantrums — when I wanted him to go fast — and he’s perfect for the hunters.”

He’s doing so well now that there are plans for him to show with Teresa Tolar, a junior rider and former neighbor of Karen’s. She had outgrown her ponies and didn’t have a horse to move up to, so after she and Atom developed a good partnership, Karen offered her Atom to show.

“Teresa trains with Liza Boyd and we took Atom to Liza, who said he’s ready to show,” Karen said with excitement. “So Teresa is taking him to the Take Two Thoroughbred series at Tryon with Liza this fall.”

Atom’s talent and performance proves he’s going to go places, and thanks to social media and some people who genuinely care about him, it definitely won’t be back to the kill pen

About the writer: Doris Degner-Foster rides with Harvard Fox Hounds when she isn’t interviewing interesting individuals in the horse sport. She enjoys writing fiction and is working on a middle-grade mystery series where kids ride horses and solve mysteries; and a mainstream murder mystery where a horse strangely appears in different people’s lives to help them through a crisis. Look for her blog, Notes From the Field at: https://sidelinesmagazine.com/blogs/notesfromthefield/ 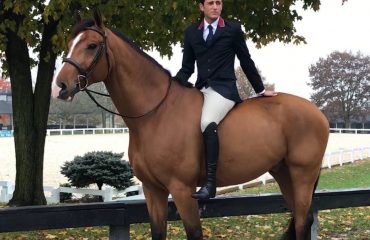 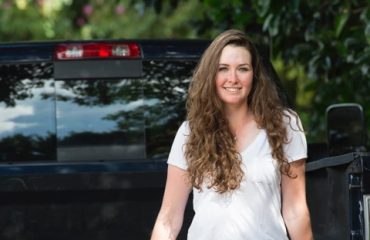 Hunter Holloway: Horses Are Her Future 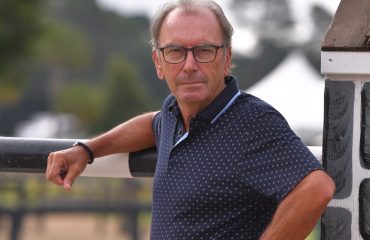