It’s only on TV that Annie Heise plays a “sociopathic crazy person”; in reality, Annie is personable and down-to-earth, while horses keep her far from crazy. She balances a busy schedule of acting and riding from her home base in Los Angeles. In the entertainment world, Annie’s credits already span various movies and TV series, including her current recurring role on NBC’s “The Blacklist.” In the horse world, she recently claimed a blue ribbon in a jumper class. In both worlds, Annie is enjoying where she is now —  and has high hopes for the future.

Annie grew up watching her sister’s riding lessons in Minnesota. “I’d roam around the barn and fell in love with the horses,” she said. “My mom finally let me start riding when I was 6.” But horses weren’t the only passion brewing. “I’ve always had a performative spirit; I was a very vivacious child, always telling jokes and doing impressions.”

Annie knew from an early age that she loved both horses and acting.

Her senior year of high school, her performative spirit earned her the role as the witch in Into the Woods. “From then on, I just knew I was going to be an actress,” Annie shared. “I was off to journalism school the next fall, where I was doomed from the beginning,” she added with a laugh. After one semester, Annie left to enroll at the University of Minnesota, where she took her first acting classes, learned what monologues were, took singing and dancing lessons and began researching Bachelor of Fine Arts acting programs. “I was told about Carnegie Mellon University’s program. I auditioned, and somehow got in!”

During college, Annie furthered her skill in both of her passions: “playing pretend and playing with horses.” As an exercise rider, she had the opportunity to ride many different horses. “I rode for an event trainer on the weekends — I’d ride her horses that didn’t go to the show, from babies to her advanced horses. It was a great learning experience. I truly appreciated how much she trusted me.”

At the end of her program at Carnegie Mellon, her small class traveled to both New York City and Los Angeles for a showcase, performing scenes and monologues for managers, agents and casting directors. “L.A. was where I ended up!” Annie said. “Luckily, I left school with a great group of representation and they set me up really well — I was able to meet lots of great people in the casting community, and here I am.”

Annie found an event barn in L.A. where she could help ride as little or as much as her busy schedule permitted. But after a while, the hunter-jumper world called her back to her original discipline. She was referred to Mark Watring in Hidden Valley, California, which is where she still rides. “He’s such a pro,” Annie lauded. “He misses nothing — I’ve learned so much about riding and myself as a person since I’ve been riding with him. He also has a great sense of humor, which is much appreciated and a plus. He’s great about my schedule, too — very understanding about last-minute changes — which happen a lot!”

Annie, who takes a moment to snuggle with Ozzie, said she rides and her husband surfs. “It keeps us happy,” she said.

Horses and a Husband

Hunter-jumpers weren’t the only reconnection Annie made in L.A. “We’re both from Minnesota and I’ve actually known him since the 7th grade,” Annie said of her now-husband John Alden. “I met him the first day of homeroom and he actually asked me out, that first day. We dated for about two weeks, in 7th-grade-land, which means we maybe hugged, but I’m not even sure.” After a breakup that Annie doesn’t remember but is vivid in John’s memory, the two didn’t see each other after that year until five years ago, after they were both already living in L.A. “We saw each other across the room, and we were just like, ‘Oh my gosh.’ I was like, ‘John Alden?’ and he was like, ‘Annie Heise?’ And I was like, ‘Oh my goodness you’re handsome!’ We just totally hit it off — again, I suppose.”

Annie and John have been married for 2 ½ years, and their relationship helps keep everything in perspective. “He has a very different kind of job than I do, which is nice,” Annie shared of John’s work in sales. “It helps us to stay balanced. It’s good not to have a husband that’s in the industry, for sure,” she added with a laugh. And while her acting schedule might have taken some getting used to, John has always been able to understand Annie’s need for horses. “Luckily he has a very time-consuming hobby: he’s a surfer. We each have our time-consuming, outdoor hobbies that we have to do or we go a little bit crazy, and we’re better people when we’re doing them, so we’re both very supportive.”

Annie leases a horse named Ozzie and has her sights set in the jumper ring. “He’s amazing. A great teacher, such a special boy. He’s very spunky and trust-oriented, which I personally love, because once you have that trust, you can read each other and adjust to and for each other. I think building a connection on the ground with horses is so important for trust … I remember growing up, I’d bring books to the barn and read in my pony’s stall. The relationship with your horse is such a fulfilling partnership.”

Annie gives Ozzie as pat as they enter the ring.

In late April, Annie competed on Ozzie in her first-ever jumper show, and her first horse show since she was 10 years old. “I was terrified,” she admitted. “One of the ladies at the barn locked eye contact with me, and she was like, ‘Annie, this is supposed to be fun. I know you’re nervous, but just enjoy yourself and it’ll be great. This is what you wanted to do.’ I had that in my head the whole time, Just have fun, just have fun. You know your partner; it was such a good experience to apply all the tools that you learn in all of your lessons and suddenly you’re kind of left alone and you have to perform. It was really, really fun.”

After going into the ring with lots of nerves and no expectations, Annie came out with a blue ribbon — a good first step toward her equestrian goal: a grand prix. “It’s a big one, and it’s lofty, and part of it is wondering if you’ll find the right horse. But it’s something that I’ve always wanted to do. I watched them on TV when I was little, and I now DVR every single equestrian thing that comes on. My husband actually watches with me, which is very sweet. He’s very into it now — he loves Beezie Madden, she’s his favorite. He’s like, ‘That’s my girl, that’s Beezie.’ So hilarious.”

Enjoying where she is now even while working towards bigger goals doesn’t just apply to Annie’s horseplay. Her favorite role on screen so far is her current character on “The Blacklist.” “It’s been such a cool experience because they actually write the show as they go throughout the season, so you have no idea what’s coming,” she explained, “and that makes my job really exciting because you’re always on your toes. The twists and turns that they can take, specifically with the character I’m playing because I’m playing this sociopath crazy person. She was a hacker at one point, and she was undercover, and then they evolved my character into more of a love interest for someone, and it’s just been a really cool experience. I feel like I’ve played five different characters all in the same show. The writers really got a chance to know me and understand me, and understand my voice and my style as an actor and write for that, which is such a dream. It’s been a really cool opportunity.”

Annie hopes to continue working as much as possible. “I love doing both TV and movies,” she said. “They’re very different kinds of projects to work on: With movies there’s this quick intimacy with the group, and everyone’s working together on this project that has a beginning, middle and end to it, whereas in TV you kind of have to jump into whatever rhythm everyone else is already in. They’re very different, but they’re both very fulfilling. I’d love to go back and do some theater stuff, because that’s originally what I was trained in. Eventually I’d like to dabble in some theater in New York and stuff like that, but for now, living in Los Angeles and being able to ride and my husband being able to surf, it’s good. It keeps us happy, so that’s good.”

Hair and makeup by Lauren Reid 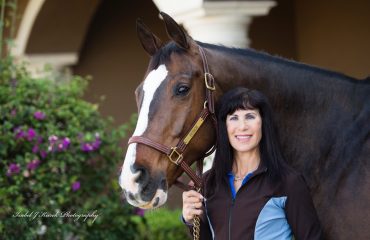 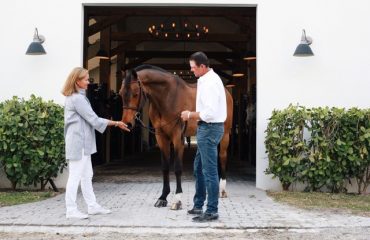 Ken and Emily Smith: Working and Riding Together