Boyd is the first to admit he is crazy about eventing. Photo by Louisa Davidson

Boyd Martin, a top member of the Land Rover U.S. Eventing Team, is the progeny of an Australian father, the late Ross Martin, and an American mother, Toy Dorgan, who met competing in the 1968 Winter Olympics in Grenoble, France. His father’s sporting passions for skiing, bicycle racing and horses proved key in Boyd’s childhood adventures and Pony Club lessons with a pony called Willy (Will He Do It). Competition runs in the family genes and, although Boyd could have excelled in any sport, the eventing world is thrilled to claim him for their own.

Boyd’s equestrian career began in Australia where he recorded his first major win in 2003 at Adelaide CCI**** and the very last long-format four-star ever held. He fell in love with American eventing when he competed with Ying Yang Yo at 2006 Rolex Kentucky CCI****. One year later, after liquidating Windurra LLC, their successful business Down Under, Boyd and his wife, Silva, moved to the U.S. to pursue their respective dreams of international eventing and Grand Prix dressage.

Boyd made a huge splash in his first year of American eventing, earning 306 points to finish seventh on the 2007 U.S. Eventing Association’s Rider of the Year leaderboard. Thanks to dual citizenship, he began representing the U.S. in 2009. The following year, Boyd and Silva launched Windurra USA LLC in Pennsylvania and South Carolina. At the 2010 World Equestrian Games in Lexington, Kentucky, he was the top-placed U.S. rider (10th) and again in 2014 (seventh) at the World Equestrian Games in France. At the 2015 Pan American Games in Canada, his fourth place finish contributed to the gold medal won by the Land Rover U.S. Eventing Team, qualifying the U.S. for the Rio Olympics this summer.

For the first couple years stateside, Boyd worked as the assistant to Phillip Dutton and they became best friends. They risked their lives for Boyd’s horse Neville Bardos, dragging the Australian Thoroughbred out of a burning barn, and the world fell in love with these “iron men” of eventing and the amazing Nev and his miraculous recovery from life-threatening injuries. That September, Boyd and Neville jumped clear inside the time on the massive cross-country to finish seventh, best of the Americans at the 2011 Burghley CCI**** in England. The U.S. Equestrian Federation named Neville Bardos Horse of the Year.

Boyd finished 2015 in third place overall on the USEA Leaderboard and ranked 10th in the world for eventing by the International Federation for Equestrian Sports (FEI). He has five four-star horses in training with the goal to make the Land Rover U.S. Eventing Team to compete in the 2016 Olympics in Brazil.

Winning statistics aside, who is Boyd Martin at home, at work and when he’s competing five or six horses every weekend? He’s easy-going, articulate, quick-witted and charming, yet driven to excel.

In mid-February, Boyd broke his right collarbone in a spill on the Novice cross-country at Full Gallop Farm in Aiken, South Carolina. Sidelines wanted to know what he’s like when he’s laid up.

“I’m a pretty hyperactive person at the best of times,” said Boyd. “When I’ve picked up an injury, I would consider myself a pretty frustrated patient. One to two days sitting around doing nothing sends me up the wall so I wanted to get back into action as soon as possible.”

His normal daily routine can include flatting 10 to 12 horses and a big jumping day means riding up to 16 horses. With so much at stake and this being an Olympic year, Boyd underwent orthopedic surgery with Dr. David Altcheck at the Hospital for Special Surgery in Manhattan, New York.

“I think I’ve now had 15 surgeries and 20 broken bones, but this by far has been the most remarkable surgery and comeback I’ve ever experienced,” said Boyd. “The technology was pretty amazing at the hospital in Manhattan, and the surgery was funded by the U.S. Olympic Committee. I got Teflon put under my collarbone and two plates and screws and a re-growth hormone injected into the bone. I think about five days after the surgery I could ride again, which was just fantastic and fascinating. I rode dressage at first. Then I competed five horses at Intermediate at Pine Top two weeks after I broke the collarbone in two places. I did it sort of pain-free.”

Marriage Made in (Horse) Heaven

With two international equestrians in different disciplines, the dynamic is different than if they competed in the same sport. Silva, German born and trained, is a Grand Prix dressage rider who combines elegant expertise in the saddle with being down-to-earth and people-oriented, albeit a tough competitor. Boyd trains with Silva and he’s candid about her impact on his dressage.

“No way in the world would I be where I am today without Silva,” said Boyd. “Firstly, she schools all of my top horses, and teaches the [lead] changes to all the event horses. Her understanding of thoroughness, suppleness and engagement is in a different stratosphere to my understanding. Secondly, I’m a big believer that it’s monkey see-monkey do, and at our farm during a day’s training, we’re riding alongside of Grand Prix dressage horses and you see all that big movement. I think it rubs off on me.”

About That First Rolex

Boyd, on Crackerjacks, demonstrates cross-country jump training in the arena during the USET Master Class in Aiken, South Carolina.
Photo by Louisa Davidson

like zone of total focus. They had one rail in show jumping and finished 11th. Boyd’s an incredibly consistent competitor. It’s in his genes.

Silva discovered a video from a collection in Australia and posted the “Story of Willy” on YouTube. The video, made by childhood friend Tom White, shows 10-year-old Boyd riding his pony Willy on the cross-country course he built in the backyard of his childhood home. He’s fearless, determined and focused — a precocious preview of the brilliance that makes him one of the elite in international eventing.

“I think that you get to a point in the sport of eventing that you lose your mind a little bit — I think many years ago I became so obsessed and excited about this sport that I did lose my marbles a little bit,” he said. “I really live for those high-level competitions. I thoroughly enjoy them. I love the excitement and the challenge of being at the big events. The unknowingness of what’s going to happen — the highs are high, the lows are low — that’s sort of been my life for the last 15 years.”

Boyd admitted that no one ever asked him about pre-event jitters, but he was happy to discuss the topic. “To be honest, I’ve competed so many horses for so many years now, even if it’s the Olympic Games or World Championships, I’m just so practiced that I really don’t get nervous in the competition — it’s almost surreal,” he said. “The only thing that worries me, leading up to the event, is the fear of failing — like you’re not going to be able to pull it off. I’m not sure if that counts as nerves or the thing that keeps me hungry and making sure that, in the preparation for the event, no stones are left unturned.”

SmartPak has sponsored the Martins for several years, and Boyd raved about the accuracy and ease at feeding time. “We have a lot of different, unique horses in training and to specialize each horse’s dietary needs and put them all in one SmartPak is really convenient,” he said. “Some horses need joint supplements mixed in with biotin to help their feet. Others need digestive supplements and electrolytes. Each horse is very specific and different from every other horse, and SmartPak customizes each horse as an individual. They’re great.”

At first, Boyd thought SmartPak was just a supplement company, but the truth set him free in terms of one-stop shopping online at home. “We get all of our riding apparel through SmartPak, all of our horse gear and, to be quite honest, I literally have not walked into a tack store for the last four years,” said Boyd. “We order everything online and two days later the UPS truck turns up with a SmartPak box. It gives us a lot more time to focus on the things we want to do rather than running off to the tack store once a week.”

In September, Boyd and Silva welcomed their first child, a son: Nox Christoph Martin is already a chip off the old block, happiest when he’s doing something.

“Nox has changed my life a lot. When you’re a high-level competitor, you start getting a bit of an ego that everything’s about you, which I try not to do,” Boyd said, with a laugh. “The whole day revolves around you: you ride this horse at this time, teach a lesson at that time, you want this done with that horse … the world revolves around you and your sporting goals. When we had this kid, all of a sudden it’s not all about me, and not all about Silva and to be quite honest, I really like that because you get a little bit too self-centered. I think when you get so obsessed about your goals, your competition — having a child you realize that there’s way more to life than just your horses and your competitions.”

The Martins’ world expanded with Nox, but it hasn’t really affected Boyd’s nerves of steel although he admitted he’s a bit picky about the horses he competes and trains. “I’m not sure that revolves around having a child — I think it’s just the way it evolves when you get a little more successful. Better horses come your way and you don’t have to be as desperate to ride anything and everything,” he said. “However, I love a good challenge, and if someone sends me a horse, I’m going to take it and give it a try. I don’t have any real fear of getting injured. It’s just all part of the game.”

Note: Boyd Martin and Allison Springer will again lead the SmartPak Cross-Country Walk at Rolex Kentucky Three-Day Event. To sign up for the course walk (time and date TBA): www.smartpak.com/CourseWalk 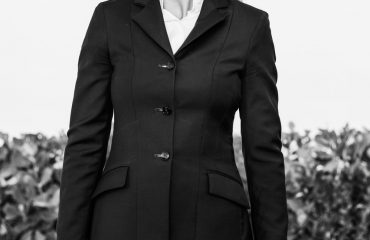 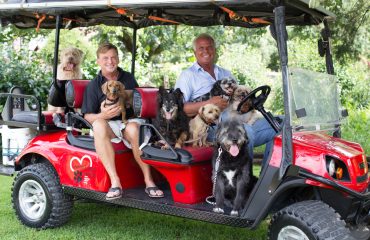 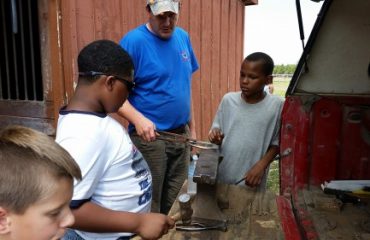