Catherine Apostol can trace her competitive and equestrian genes to her parents, Paul and Cathy Apostol. They weren’t “horsey” per se, but they understood that all-consuming competitive drive when it cropped up in their offspring.

Catherine’s dad, Paul, is a two-time Olympian in fencing (1972, 1976), former Sabre National Champion and Veterans Sabre World Champion (2006, 2007). He knew about all about the thrill of victory, the agony of defeat, the importance of hard work and of never giving up. Cathy contributed her lifelong love for horses, along with support, patience and empathy. They embraced the equestrian lifestyle, even though it changed their lives in many ways, and worked hard to fulfill their offspring’s dreams.

Now that Catherine has aged out of juniors and attends Bucknell University, she has put showing on circuit on hold, but is riding on the IHSA team at Bucknell. Her parents, while pleased with the easier pace, have no regrets even after all the years, miles, effort, elation, heartbreak, and financial investment of supporting two daughters through their junior careers. Success often involves far more than titles, trophies and rosettes.

“That’s the trade-off — you spend a fortune and end up with well-rounded, disciplined, wholesome young ladies,” said Paul. “Our girls fell madly in love with horses and with riding, but they both learned a lot of discipline and a work ethic. Alexis was about 9 when she got started and Catherine took to it when she was 5. Every day they went to the barn, where they were required to be responsible for taking care of their horses. On weekends, there were shows. They kept up their marks at school. Neither one smoked or drank or caroused or carried on. What we spent on horses was a trade-off, and it was a good trade-off because our girls learned self-discipline and a sense of responsibility that I don’t think is easy to come by outside of riding.”

Catherine threw herself gung-ho into showing with her first pony. “Bumble was a 20-year-old legend and he made me develop a really competitive side from the very beginning,” recalled Catherine. Her next pony, Winter’s End, aka Winnie, would seal the deal in and out of the show ring for the young rider.

When Winnie arrived, Catherine was 11. The little black pony had no show experience whatsoever, but that didn’t faze his young rider. “I worked really hard with him and we won the 2010 USHJA Zone 2 Pony Hunter Finals [Pennsylvania National Horse Show] and he was High Score champion for the year,” said Catherine. “I had a lot of success, which ingrained in me the mindset that hard work is essential to be successful.”

She also looked up to her sister Alexis, older by eight years, who served as trailblazer, launching the Apostols into the show world and equestrian lifestyle. A born leader, Alexis was always available to provide support, in person and over the phone, to help her kid sister through various ups and downs. She guided Catherine, 5, through her first riding lesson and led the search for the best medium pony when she began to compete more seriously.

“Alexis was 9 when she took her first lesson and she wanted to keep going, so Paul and I looked for a lake house to rent and a nearby barn,” said Cathy. “We found Smoke Rise Farms and became part of the Smoke Rise Riding Club where Ann Mitchell gave our girls a great foundation. They rode and were responsible for the care of their horses. Alexis was a defining factor in Catherine’s riding career and they looked out for each other.”

As Catherine and Alexis became more involved with showing, they went to the barn at least six days a week. Cathy estimated that she drove at least 300,000 equestrian-related miles in the last 10 years or so, but she didn’t mind because she loves being around horses.

“Alexis competed in ‘Big Eq’ at Smoke Rise, which was difficult without an indoor, given New Jersey winters,” said Cathy. “But she persevered and rode in the Maclay Regionals and the Medal Finals. She went on to Colgate University where she became a Riding Club captain and competed in the IHSA Regionals.”

When Alexis went away to college, Catherine’s grades slipped a little in middle school because she would ride her pony and Alexis’s first horse. Staying at the barn longer meant late dinners and late hours studying. By then, Paul was retired and involved in his Veterans fencing career and also coached boys’ fencing at Ramapo (New Jersey) High School. It all worked because competition was a household fact of life, but that didn’t necessarily make it any easier.

Then came a major growth spurt and difficult transition to horses. For about six months, Catherine totally lost her passion for riding and even needed a pep talk from Alexis by phone just to get out of the car at the barn. It was a troubling time for the entire family. Part of it was Catherine graduating from her medium pony to a horse without anything in between. It didn’t help that she was riding outside, after school, during the winter in New Jersey.

“I was on a bit of a rough path where I was riding a horse that definitely knew how to take advantage of me, because I was used to ponies that I was basically the same size as,” said Catherine. “I had no idea how to handle the horse’s bad behavior and I lost a lot of confidence. My mom always jokes that I would sit in the car and refuse to get out when we got to the barn, but it’s true!”

The solution soon presented itself in the form of a new horse, which resulted in big changes — moving to a new barn and a new trainer. Alexis again played a pivotal role. She was headed to the IHSA Regionals and wanted a tune-up lesson with Robin Rost Fairclough. The Apostols had purchased Phantom, a Selle Français warmblood from Robin, who helped Alexis at Medal Finals. It was a no-brainer that Alexis wanted some polish from Robin, a top grand prix rider and trainer, well known and sought after on the circuit by riders of all ages and levels.

“Catherine and I went to watch Alexis’s lesson with Robin,” said Cathy. “We were looking for a horse for Catherine to do three-foot equitation and Robin knew of a good one, the exact, kind and quiet VDL Au Revoir. We bought that horse and soon realized that we had to move to Top Brass Farm so Catherine could train with Robin. It was 90 minutes from school to her barn and 60 minutes from the barn to our home. We didn’t have a family dinner at home for three years. But Catherine’s riding and confidence improved dramatically and so did her success.”

Catherine and Courage over the water at Devon.
Photo by The Book LLC

Under Robin’s tutelage, VDL Au Revoir, aka Ariel, carried Catherine beyond her meltdown into what Cathy summarized as a “beautiful junior riding career” and success in the three-foot equitation division.

“Robin’s approach was to build confidence with positive reinforcement, praise, constructive criticism, and always make it fun,” said Cathy. “Catherine always left the barn with a smile on her face. She wanted to go to the barn every day. Then she started to win at HITS and other challenging A-rated shows and her results reinforced her dedication, which Robin continued to inspire.

“What’s amazing about Robin is her keen and excellent selection of a horse that suits the rider, and her knowledge of the importance of the right saddle, bit, boots for horse and rider, all the ingredients needed for success, and personal attention,” continued Cathy. “We feel so lucky, when we’re at competitions where other trainers have anywhere from four to a dozen riders, that we’ve found a smaller barn with such fine individual attention.”

When Catherine “outgrew” Ariel — four more inches to her own height, plus she needed a 3-foot-6 horse to do “Big Eq,” Robin found the perfect horse for her with Eamon Hughes, appropriately named Courage.

“We got very lucky with Courage,” said Cathy. “We bought an inexperienced horse and did ‘Big Eq’ on a budget. We worked very hard with him, and Courage turned out amazing — thanks to Robin’s knowledge and experience, and also to some very good luck.”

During Catherine’s last three years as a junior, she competed in three USEF Pessoa Medal National Finals and qualified for the Maclay Regionals three times and competed in the Maclay Finals in Kentucky in 2014 and 2016.

“My horse Courage never competed in equitation or went to any Finals before I got him, but he exceeded my expectations all three years and I walked away from each Final feeling really good about our performance,” said Catherine. “Last fall, I went from riding and training every day at Top Brass to prepare for Finals with Robin to being at Bucknell University. Traveling straight to Harrisburg or Capital Challenge a day or two before I showed was a huge adjustment and cause for a lot of stress, but thanks to Robin’s amazing efforts, I had no doubts that my horse would be perfectly prepared and that I could rely on him and our years together to get the job done. Robin gave me confidence and all the extra help or lessons I needed to make sure I felt ready to go into the ring.”

Catherine also qualified for the USET Finals (USEF Talent Search East) in 2015 and 2016. She opted to ride her new jumper, Dolly, at last year’s USET Finals, to give Courage a rest between the big indoor shows. She earned her silver medal by winning 10 USET classes; because she’s eligible until she’s 21, there’s still time to earn her USET gold medal.

“I’m no longer a junior — phew!” said Catherine. “After a few very intense years of showing and financial strain — sorry, Mom and Dad! — and selling Courage, I have turned my focus to Bucknell, but I won’t be able to stay away for long.”

Catherine spent her winter break in Ocala, Florida, riding with Robin and enjoying the opportunity to pilot several jumpers over really big fences — heady stuff for a college freshman who’s trying to figure out her major while Alexis works to earn dual master’s degrees at the University of Michigan. They both know they have to be able to support their passion for horses. They’re very fortunate. Their Olympian dad and horse-loving mom instilled in them a moral compass that will help them to stay on course, in the show ring and in everyday life. 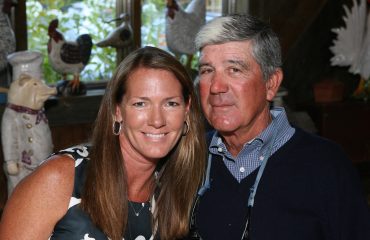 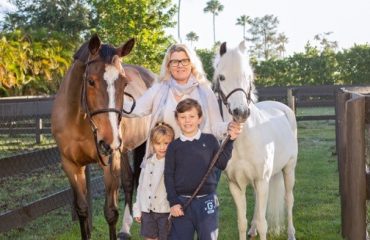