Catching the “horse bug” is as unpredictable as a lightning strike — and just as impossible to contain. Elli Yeager first saw a horse when she was 18 months old, and her passion for horses became a force of nature.

“The Ventura County Fair was near my house growing up in California; it was really popular and had the whole rodeo side to it,” Elli said. “At the end of the night as they were packing everything up, my dad went over to one of the people loading their horses and asked, ‘Can my daughter sit on your horse?’ Little did they know it would take an hour to get me off.”

Since Elli was so young, her father, Lou, tried to placate her by buying her a rocking horse — but little Elli rode the rocking horse so enthusiastically Lou had to take it away after she kept flipping it over. Then, the arm of the couch became her horse, complete with a towel saddle, Lou’s ties as reins and his belts as stirrups as she rode to “The Saddle Club” on TV.

Finally accepting the inevitable, Lou began taking Elli to pony-go-rounds, and then found a barn nearby that offered trail rides. “My dad would walk me for hours at a time and then switch horses and go on another, until the lady who owned the place finally agreed to give me lessons when I was about 3 years old,” Elli said.

Elli’s whirlwind of passion and talent for horses has already taken her to winning equitation championships across the country, including the R.W. “Ronnie” Mutch Equitation Championship High Point Award at the 2018 ASPCA Maclay Finals and the 2018 Lindsay Maxwell Charitable Fund Equitation Finals at the Washington International Horse Show, both at 15 years old. Now Elli is 17, and it’s clear this equestrian storm isn’t dissipating anytime soon.

Elli’s early lessons were Western. “I couldn’t take English because I didn’t quite fit the saddle, but with Western they could tie me in there,” Elli explained. Despite Lou’s apprehensions, Elli was fearless and calm around the horses from the very beginning. It wasn’t long before Elli was able to fit into an English saddle and moved to another barn, where she rode their ponies before leasing her first pony from a trainer at the Los Angeles Equestrian Center.

Showing lead line and crossrails led Elli to Foxfield Riding School for crossrails and flat classes, then to Mark Bone for ponies and hunters. “I got more serious and moved to Karen Healey, and that’s when I got my first horse,” Elli said. “I leased my first horse with her for about six months, and then it got hurt. They put me on Copper one day and I said, ‘I want this horse.’”

Copperfield 39 was just 6 years old at the time but already seasoned, having done the equitation finals with Alexis Graves the year prior. “It just worked out, and I got him when I was 10,” Elli said. “He was perfect right out of the box: He’s like a genius baby for horses. I was very lucky.”

Elli’s connection with Copper has been an important part of her life, and not just in the arena. “My parents got divorced when I was very young, so horses were a therapy to me in that sense: The barn was always a safe place for me to go throughout my whole life, if I ever felt bad,” she said. “They still are that way for me — it is about competition, but it’s also about the bond that I have with all of my horses, especially Copper because I’ve had him from the beginning.”

When Karen shut down her program, Elli continued riding with assistant trainer Tasha Visokay. One fateful Christmas, Elli and Lou decided they wanted to go to the Winter Equestrian Festival (WEF). Tasha called Stacia Madden of Beacon Hill Show Stables in Colts Neck, New Jersey. Just like that, Elli’s love of horses carried her and her father from the West Coast to the East Coast and they moved to Wilmington, New Jersey, in 2017.

Just as he played an integral role in getting Elli into horses and supporting her all along the way, Lou was able to pick up everything and move across the country to support his daughter’s unquenchable passion. Their home in Wilmington is just 20 minutes from Beacon Hill, allowing Elli plenty of time to spend mornings riding her horses and several of Stacia’s and then to do online school with a virtual classroom at home.

“My dad is a huge part in the whole thing coming true,” Elli said appreciatively. “His job let him come and work out of the New York office, which is great, so it was a pretty seamless move in that regard, but that’s not usually the case in others’ lives so I was really lucky that he could pick up everything and move with me.”

Whether he realized it at the time or not, Lou also proved catalyst to Elli pushing to see just how far she and Copper could really go: When they first got Copper, Lou told Elli it was the only equitation horse she would get: They weren’t going to “upgrade” or get the fanciest horse out there. Copper was the horse she had, and Copper was the horse she would work with. “It was a little bit of a challenge for me, and I really like accepting challenges,” Elli said. “Whenever someone challenges me, I always have to see it through to the other side. I think that’s what I did.”

She has a long list of championships and ribbons to prove it. Though Washington has been their biggest accomplishment to date, the Maclay Finals were meaningful to Elli because she and Copper moved up so many placings. In addition to Copper, Elli is also pursuing her dreams with Waliba VDL and her new horse, Stakkata BF, in the high junior jumpers and U25.

Part of pursuing greatness includes learning from great teachers, and that’s what Elli did at Spruce Meadows last summer after her dad surprised her on the last day of school with the news that she would be training with John and Beezie Madden. “It was just an amazing experience for me and my horses,” Elli said. “Beezie has done everything, and it was great to see how she does things, just shadowing them and how they do everything in their barn. I learned so much; it was an unbelievable amount of information within that time period.”

Elli’s goals include consistency and climbing the equitation ranks, as well as moving toward two-star and three-star grand prix. She’s a junior in high school, and recently committed to Southern Methodist University (SMU) and SMU Equestrian.

When she’s not riding or studying, Elli can often be found connecting with nature on a run or at the beach. “I’ve always been a bit of a beach baby,” she said. “When I was little, I could swim for hours, and I used to surf. Then my surf instructor put a camera under my board in California and I saw a shark, and I said, ‘Ok, I’m good!’ So I don’t surf anymore, but I do go to the ocean a lot because I live about five minutes from a beach in New Jersey.”

Though the future is even less predictable than the waves she used to ride or the weather for a horse show, Elli’s has a high chance of show-ring success — and a 100 percent chance of a lifetime loving horses. 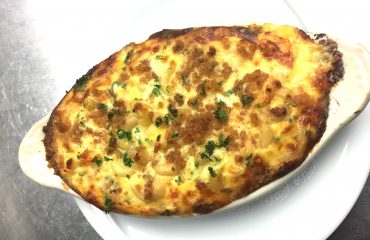 Stable to Table: The Prime Steakhouse 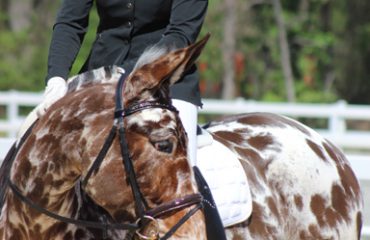