Mary Jastrzemski began riding in a western saddle placed over a five-foot wooden coop jump. With her drink and some cookies within reach, 3-year-old Mary could “follow along” in the riding lesson with her mother at Quantico Marine Corps Base. She had no way of knowing then that horses and riding would later help save her life.

Mary’s father was a career Marine and the family moved with him every few years. There were stables at the Quantico Marine base where Mary and her mother took riding lessons, and also at Lejeune Marine base. When her father was later stationed in Annapolis, Mary began riding competitively. After he died of cancer at the young age of 40, Mary began to really benefit from the time spent with the horses. After her mother moved the family to Cincinnati, Mary continued to ride, training with Linda Hague who specialized in re-training racing Thoroughbreds.

Mary followed in Hague’s footsteps by rescuing racehorses, training them for new careers and selling them into new homes. “As a teenager, I got a real sense of accomplishment,” Mary said. “It was back in the ’70s, and I got a horse that was headed for slaughter. I got him out of the [kill] pen and made him valuable to someone else. I made maybe $300, but it really boosted my self-confidence.”

Confidence Challenged
However, her confidence was shaken after she had a fall while jumping during a competition. “I was about 19 when I was showing a jumper at a local show and there was a triple combination,” Mary remembered. “On the third element, I went off and I cracked my sternum on the standard and cracked the L5 vertebra in my back. I never recovered emotionally. I was always afraid of jumping after that. Since the hunter/jumper discipline was all I knew, I muscled through but I wasn’t very successful at it. I didn’t know anything about dressage then.”

After Mary’s graduation from Ohio State University, she moved back to Virginia because it had always seemed like home to her. Her fear of jumping influenced her decision about whether or not she’d continue to ride. Also, the expense of having a horse in the heart of wealthy horse country was especially difficult for a young person starting her career. Mary quit riding and focused on her work as an executive assistant at the mass media company America Online.

A Frightening Discovery
In 2001, during a routine yearly exam, the doctor felt something suspicious in her left breast. Mary at first dismissed it as a small benign cyst that had been investigated the previous year, but went for the recommended mammogram. She was surprised when she was told that micro calcifications, which indicated cancer, were found in two quadrants in her right breast.

“I had a doctor look at me and say, ‘Mary, you have breast cancer in two quadrants; it’s probably in your lymph nodes. You need a radical mastectomy, you’re going to need aggressive radiation and aggressive chemo. I don’t know what your prognosis is,’” Mary said. During treatment and the agony of wondering how much time she had left, Mary remembered her love of horses and riding, which helped her get through the ordeal of the treatments. “When you’re lying on a radiation table — truly you don’t know the loneliness — that’s when you start talking to yourself. Right then I made a promise to myself that I was going back into horses if I lived.”

Much to her relief, her condition turned out not to be quite as bad as the initial diagnosis. The tumor was T1b, meaning the tumor was invasive but smaller than 1 centimeter, and she only had to have a lumpectomy with radiation. Mary remembered her promise to herself to get back to riding with the goal of showing in a rated show, but those plans got postponed. Regaining her health was a high priority and there were some changes going on in her job.

America Online had merged with Time Warner, and a reduction in the workforce was needed. Mary was laid off in 2004 with a good benefit package from the company, so she took the opportunity to relocate. “I moved to New Mexico to be closer to my family — that was reason number one. Reason number two was that I knew I could afford a horse there. I knew it because I’d done my homework,” Mary laughed. “I got a job with the University of New Mexico in May 2005 and I found a hunter jumper barn about that same time and I started leasing horses. Then I found Darlah a year later.”

A New Horse, A New Start
Friends knew Mary wanted to buy her own horse and that she liked Thoroughbreds. Through a circuitous route, she heard about a mare that was in need of a new home and some TLC. Mary drove to the back country of New Mexico in February through cold, howling winds to see the horse. “I got out of the car and there’s this mare, with her head laying low because of the wind. She was skinny with pancaked hooves, but then she just looked at me and I said, “That’s my horse!”

The next weekend, the weather had cleared and Mary returned to complete the sale. She took her mom with her, who was not impressed with her daughter’s choice. She told Mary that the mare just looked pitiful. “I said, ‘Mom look at her eye,’” Mary said. “Truly, I bought her on the eye.”

When Mary brought the mare she’d name Darlah home, her friends at the barn were shocked at her appearance and stunned that Mary bought her. She confidently answered that the mare was going to be the ultimate show horse, and was eventually proved correct in her predictions. But it took a while. With a good feeding program, Darlah’s health improved to the point that although she was a 6-year-old, she actually grew three inches of height within five months.

Mary initially placed Darlah with someone to start riding her but it didn’t go smoothly, and the mare developed tears in her patellar ligament. “The vet asked, ‘What about dressage?’ I didn’t know anything about it but I said, ‘Just sign me up!’” Mary said. “And that’s really how I got into dressage.”

In addition to her patellar ligament tear, there were more delays in her training due to an accident where Darlah slid on some concrete. Mary could understand what the mare was going through, since she had also had health challenges, so she patiently dealt with the setbacks. After Darlah recovered, Mary changed trainers and focused on dressage with the goal of keeping her promise to herself to ride in a rated show.

When that time came, Mary had some trouble convincing her instructor that she could show at that level of competition. Her instructor pointed out that her scores were only in the 50s at unrated shows, but Mary explained the promise she’d made to herself that she’d ride in a rated show if she lived through the cancer treatments. The debate was over when Mary told her instructor, “A doctor looked me in the eye and said, ‘You have cancer and I don’t know what your prognosis is’ and now you’re telling me that [the possibility of scoring] a 50 in a rated show is somehow going to just crush me?”

Back to the Show Ring
Mary did enter that rated show and scored a 62.3 in Training Level, Test 3 and qualified for National competition. Mary also started working with trainer Ulla Hudson. “I finally found the instructor that could talk to me,” Mary said. “We could do things; I knew exactly what I wanted to do and she was great.

“I qualified for Regionals knowing I probably wasn’t really ready for it but you know you’ve got to throw caution to the winds,” Mary said emphatically. “That’s what cancer teaches you: You’ve just got to go for it sometimes.” She didn’t place but was pleased with her score of 63.2, and Darlah won the Thoroughbred high-point award for USDF Region Five.

Mary is excited about working with Ulla and is determined to continue to show in the rated shows. She scored in the high 60s and was Training Level Champion in the New Mexico Dressage Association for 2013. She qualified to go the Regionals in 2014, but a vesicular stomatitis outbreak curtailed those plans. She’s now carefully working to advance to First Level, keeping a close eye on Darlah’s old patellar ligament injury.

“The diagnosis truly crushes you down to your soul and you really have to have a determination. Truly the horses helped me. They helped me to know that I could climb out and then there was a new normal. I didn’t fight the new normal; I just went with it and built upon it,” Mary said.

Mary has more than kept her promise to herself that she made on the radiation table that day. Along the way she has kept the enthusiasm of that little girl sitting in the saddle on the coop jump when she said, “I’m about the happiest I’ve ever been, I love my life!”

About the writer: Doris Degner-Foster rides with Harvard Fox Hounds when she is not interviewing interesting individuals in the horse sport. She enjoys writing fiction and is working on a middle-grade mystery series where kids ride horses and solve mysteries, as well as a mainstream murder mystery where a horse strangely appears in different people’s live to help them through a crisis. Look for her blog, Notes From the Field at: https://sidelinesmagazine.com/blogs/notesfromthefield/ 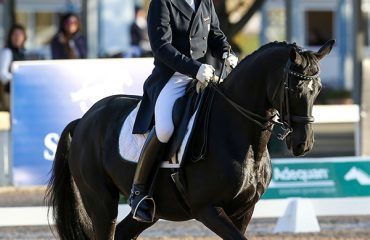 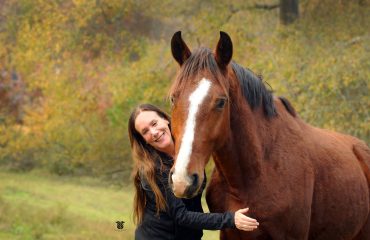 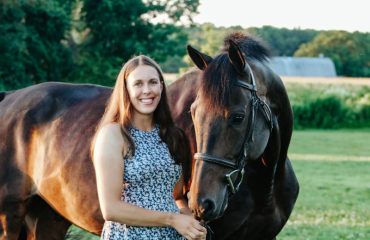