Samia and her husband, Daryl, purchased and continue to operate the Oso General Store.

There’s no shortage of story lines in Samia Staehle’s book of life. From her childhood riding ponies on foreign soil to chasing leads as an Associated Press television producer and now rising through the ranks as an amateur on the West Coast show jumping circuit, Samia’s is a story worth telling.

It all began with the love of horses that started when Samia was only 8 years old, living in Switzerland with her family. Her father, Raouf Boudjakdji, was an ambassador to the United Nations for Algeria, and the family was living in a suburb of Geneva when Samia got her chance to start Pony Club. “It was a Swiss school, and I remember vividly that the ponies were meticulously arranged by height,” Samia said with a chuckle. “I got the very last of the dusty little ponies!”

Samia and Airtime Z GHP, a 2004 Zangersheide, enjoy a walk on the farm.

Being given the smallest of the small didn’t stop Samia from working her way up through the ranks. Then, Samia was told the family was moving to India. “The only condition under which I accepted was if I could ride ponies there,” Samia recalled. “I was told yes, and off we went to India.”

It was in India that you might say Samia discovered the thrill of adrenaline, much to the credit of the military-type riding and crazy stunts of the New Delhi Children’s Riding Club. “I learned to jump, did gymkhanas, and we had exhibition riding for parents,” she said. “We were challenged to play musical chairs, the horse version, with a three-piece military band and encouraged to go at a dead gallop toward the audience, which was extremely thrilling!”

India was where Samia learned about show jumping, and where at only 11 she finished third in the children’s national championship (which included up to age 17) with a pony that was blind in one eye. “It was in my blood at that point!” Samia said.

Eventually, Samia’s family moved to Los Angeles, where her mother, Millicent, was from. Though introduced to the hunter-jumper world, horses faded to the background when she began college and her subsequent career. Samia pursued journalism; she became an intern in news broadcasting, which led to several years with the Associated Press and its international television service. From covering the passing of Princess Diana while living in Paris to stakeouts at Monica Lewinsky’s L.A. home or covering the 1998 Oscars excitement over the movie “Titanic,” Samia’s career was adrenaline-packed and extremely rewarding.

The Call Back to Riding

Things began to pile up for Samia in 1997 and 1998. “My mom had just begun chemotherapy,” she said. “I got married and I decided to go back to school to study law on the West Coast to be near my family. It was shortly after my mom passed that I got my law degree and feeling so drained, I decided to take a break and started riding at a barn near Seattle where my husband and I had moved.” Just riding to relax and get some exercise was her path back to show jumping. That little barn was the home to grand prix riders Mike and Jennifer Crooks and one thing led to another.

Samia’s Circle B Ranch — named in honor of her mother, who was fondly called Mrs. B. — in Oso, Washington.

“I was able to point my compass back to an original dream,” Samia said. “I thought, You were kind of a hot shot back then, what could you have achieved?” She watched the big names like Kyle King and Beezie Madden jumping their horses at Spruce Meadows and knew she wanted to be the one in that big green ring. Samia returned to horse riding, progressing from leasing to owning, and finally finding success in the show ring.

“One of my favorite things about show jumping is that it’s not gender-based or even age-based, it’s just a pure test of ability,” Samia said. One of the first horses that put Samia on the map in the bigger West Coast circuits was Peninsula Van Cleef, barn name Vana. The Dutch Warmblood mare didn’t know how to lose, according to Samia, and the mare took her to the circuit at Spruce Meadows for her first time.

“She’d attack whatever she looked at, and she was very fast,” Samia said. “At my first masters competition I won my first cup at 1.20 meters. When you have a horse like that, you know you can make mistakes and fix it. And then, you’re not making mistakes anymore!” Vana is now retired but remains with Samia at her farm in Oso, Washington.

Another notable mare for Samia is Chablis Z, who was a “disaster” from the beginning, rearing and completely lacking ground manners. It was her head groom, Jose Monroy, who convinced Samia to take Chablis home, and he spent two months teaching her the groundwork she needed. The mare would later take Samia to the winner’s circle at the $10,000 Thunderbird Mini Prix.

Her current stars are Uppsala de Beaufour, or Tintin, and Expresso, though her show string includes several others. “Tintin is my star,” Samia said. “He’s a complete tiger over any size fence, so brave, clever and quick.”

Samia and Uppsala de Beaufour, known as Tintin, jumping at her farm in Oso, Washington.

It’s Samia’s love of horses, combined with her talents as a television producer, that have given the opportunity to create an extraordinary short film documenting show jumping stars on the West Coast. Her project, “Desert Flight,” has garnered a lot of attention in the equine and film industry.

At the EQUUS Film Festival in New York City, “Desert Flight” was selected as Best of Festival and Best Sports Documentary out of more than 40 U.S. and international entries. “The instinct to not miss a story kicked in,” Samia said. “I realized I had access to riders like Richard Spooner, Mandy Porter, Rich Fellers, Ashlee Bond and Will Simpson, and I felt the instinct to follow that and see what we could reveal. When you’ve been on a circuit, these faces become everyday, and we become preoccupied with our own rounds. You don’t realize you’re surrounded by extraordinary stories!”

Samia worked with Tell Studios, located in Detroit, Michigan, to follow elite riders in Thermal leading up to the HITS Million Dollar Grand Prix, sitting down to talk about the sport of show jumping and how it inspires utter passion and dedication.

“We gathered so much material, the next challenge became how to distill it.” Samia said. That was where her prior experience at TV journalism — taking huge stories and condensing them down to three-minute excerpts — helped Samia edit and bring the film to life. The result was a captivating 39-minute short that showcases the beauty, talent and athleticism of the horses and shares the stories of their riders, none of who can imagine their lives without horses or show jumping.

Samia with some of her young horses.

From her perfectly situated ranch, the “Circle B” — named in honor of her mother, who was fondly called Mrs. B. — in Oso, Washington, Samia is able to design a circuit that includes Thermal and Thunderbird and culminates at Spruce Meadows. Her locale is also special to her and her husband, Daryl. After Oso suffered the deadliest landslide in U.S. history in March 2014, she and Daryl purchased and continue to operate the town’s General Store, doing their part to support and unite a resilient community.

At the Circle B, Samia has much to keep her busy. “We raise Black Welsh Mountain sheep, turkeys, chickens and are currently keeping a rescue pig,” Samia said. “Other than that, it houses my homemade show program, with guidance from California-based trainer Guillermo Obligado. I’m my own client rider so it’s a very private operation, with one full-time staff rider, Morgan Anderson, who helps hack but also shows whenever possible.”

Her small-but-mighty program employs a rather unique approach to starting the young horses; Samia happens to have reining trainer Sean McBurney as a neighbor, and all of her horses start under Sean’s tutelage. “They come out quite symmetrical,” Samia said. “It helps them be calm and deal with the show setting, taking it in stride and it bodes well for their future. They have such good manners no one is going to get scared.”

Samia currently has 23 horses at Circle B Ranch, including her show string and retirees who get to call the ranch home. She has a few special young horses sired by Rich Feller’s show jumping legend Flexible, including CB Fireworkz, who is out of her mare Chablis Z. Fireworkz has his own special story; at 8 months old, he flipped over and injured his head, leaving him with tremendous vertigo and a poor prognosis. Long story short, Samia gave the colt the chance to heal and he’s now jumping .90 meters consistently.

Samia and Daryl at their indoor ring.

“Desert Flight,” though Samia did not intend it to be, was an all-consuming project, so she’s looking forward to refocusing her efforts on her riding. The distant dream that was getting back in the saddle has propelled into the desire to get to the rings of international competition. “That’s the aim,” Samia explained, “to get to international level show jumping. To many aspiring riders, going FEI is a stepping stone, but it’s a dream come true for me!”

Having endured the high expectations of a TV newsroom producer, Samia came back into the show ring with a unique perspective that changed how she approaches each ride. “When I was younger and had a bad round, it was like the world was falling apart,” Samia explained. “Now going in and having a bad experience is the next chapter. The greatest skill is the recovery from failure!”

Like the equestrians featured in “Desert Flight,” Samia’s own journey is first about the love of her horses, followed by the love of flight via show jumping, then rounded out with that drive to compete. Samia is quietly, yet persistently, working her way through the ranks — continuing to write her own script.

Perhaps one day, Samia’s unique story will be on the big screen. Until then, she will continue to build on her own successes. “If it really came down to it, it’s all for the love of the horse,” Samia said. “They’re just so charismatic, magnetic. All roads lead to that, whether as a rider or a movie producer.” 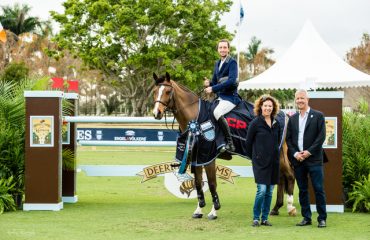 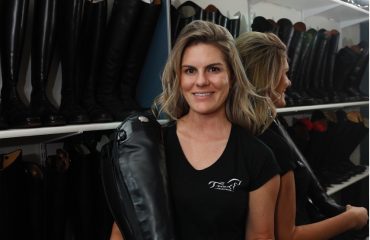