Palgrave, Ontario—Caledon Equestrian Park in Palgrave, Ontario, was the first sport venue to be named for the Toronto 2015 Pan/Parapan American Games in a special groundbreaking ceremony held May 18.  TO2015, the Toronto 2015 Pan/Parapan American Games Organizing Committee, the Government of Canada, the Province of Ontario and the Town of Caledon joined together to announce Caledon Equestrian Park as the official venue for equestrian sport, while also unveiling plans for facility improvements and community legacy. Canadian Equestrian Team members Jill Henselwood and Yann Candele (both standing), speak at the official groundbreaking ceremony naming Caledon Equestrian Park as a host venue for the Toronto 2015 Pan/Parapan American Games. (Photo by ShootPhoto.ca) Held during the Caledon National show jumping tournament, competition was halted to allow athletes and their families and friends to gather for the groundbreaking ceremony.  Canadian Equestrian Team members Yann Candele ofCaledon,ON, and 2008 Olympic Team Silver medalist Jill Henselwood participated in the on-site announcement. “After years of preparation and planning, we are honoured not only to have Caledon Equestrian Park named as the official host of equestrian sport for the 2015 Pan/Parapan American Games, but to also be selected as the very first sport venue announced by the TO2015 Organizing Committee,” said Craig Collins of Equestrian Management Group (EMG), a funding partner and the operating group of Caledon Equestrian Park.  “To make the announcement in front of hundreds of our competitors, whether they are children on ponies or junior riders with international aspirations, really underlines the legacy that hosting the Pan Am events will create for the future of our sport.  I am sure many of these young riders will remember gathering together on the hill for this momentous announcement, and possibly start dreaming of one day standing on the podium to claim a medal for our country.” Mike Gallagher, President of Equine Canada, echoed those sentiments, recognizing the impact hosting the Pan/Parapan American Games will have on equestrian sport both locally and nationwide 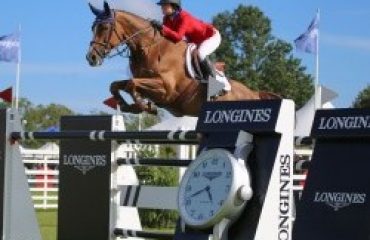