On May 31, fire destroyed the barn rented by international event rider Boyd Martin from Phillip Dutton at True Prospect Farm (West Grove, PA). Of the 11 horses stabled in the wood and stone bank barn, six perished in the blaze.  Lillian Heard, Caitlin Silliman and Ryan Wood, who lived upstairs, managed to lead three horses to safety.  The fire had burned out of control for at least 30 minutes, but Phillip rushed in and brought out Catch A Star.

About 10 minutes later, Boyd arrived on the scene and engaged in “a bit of an altercation with the firefighters” (his words), then dashed around the barn to try to save Neville Bardos, the New Zealand Thoroughbred whose eventing career had started with Boyd’s wife Silva in the saddle. Phillip followed Boyd and the two of them managed to bring Neville out of the blazing structure.

All five horses were treated at the University of Pennsylvania’s New Bolton Center.  Neville Bardos, Boyd’s partner for the 2010 Alltech World Equestrian Games, sustained the worst injuries, especially his lungs.  He shouldn’t have survived, but he did.

“Neville’s breaking all the laws and defying all the odds at the moment,” said Martin.  “Initially, he was fighting for his life and then a couple days later it looked like he’d survive.  Then a couple weeks later, it looked like we could ride him again, and now we’re just taking it day by day, but it looks like he’s about to take on the world’s toughest four-star at Burghley in England.  It’s exciting and emotional at the same time with all the terrible tragedies that I’ve gone through [His father, Ross Martin, passed away in early July after being struck by a truck during a bicycle race in Australia.]  It’s the one thing that’s kept me going.”

In the aftermath of the fire, the entire eventing community rallied.  Bruce Duchossois, who competes in the amateur owner hunters, has owned several of Phillip’s top three-day horses, including Connaught.  Phillip, who earned team gold in 1996 riding for Australia, became an American citizen in 2006.   In 2007, he earned team gold and individual silver riding for the USA.  In 2008, he piloted Connaught to first place in the prestigious four-star Kentucky Rolex Three-Day Event.  About five years ago Bruce became partners with Phillip in the ownership of True Prospect Farm.

Bruce learned that ACE Private Risk Services, the high-net worth personal lines company of global insurance carrier, the ACE Group – who settled the claim quickly and gracefully – planned to make a donation in honor of the six horses.  Several of those horses were being considered to represent the USA for the 2011 Pan American Games and now would never have a chance to prove themselves.

Stepping in to Help

“I think that what ACE Private Risk Services is doing is phenomenal,” said Bruce.  “Insurance – you can’t live with it, you can’t live without it – and what these ACE people have done really is above and beyond.  It was a beautiful old stone barn, and the horses – well, they were priceless.  To settle the way they did and then to come back and make a donation to the USET Foundation in the memory of the horses – well, it’s unheard of. It opens eyes that they are good people and that they want to give back.  I was blown away.”

Phillip Dutton, accompanied by one of the event horses stabled at True Prospect Farm, commented about ACE's generous gift to the USET Foundation in honor of the fallen horses and the matching pledge from Bruce Duchossois: "It's probably the best positive that's come out of the whole tragedy that we had, along with the outpouring of support from everybody throughout the country for Boyd and the people involved, but for ACE to step up and go beyond their commitment and to give a donation of this magnitude for horses of the future, that's pretty incredible."

On Tuesday, August 16th, Bob Courtemanche, Division President of ACE Private Risk Services, and W. Kirk James, Chief Operating Officer of Hub International (the broker that matched up ACE with True Prospect), met at True Prospect Farm with Bruce, Phillip and his wife Evie, and Boyd.  In a spirit of camaraderie and compassion, ACE’s donation to the USET Foundation does more than honor the six fallen event horses: it also pays tribute to the uncommon valor of the people who risked their own lives to save the five.

“We protect property, but at the end of the day we protect people,” said Bob.  “If we can help to make a sad situation better by honoring the bravery and compassion of the people at True Prospect Farm, that’s part of our job.  It’s not just property they lost in that fire.  They lost horses, and they aren’t replaceable the way machines are.  I’m learning about the partnership between horse and rider.”

ACE’s generous donation may be unprecedented in the insurance world, but their humanity seems to be a matter of daily record.  “It’s moving.  It restores my faith in the American culture, that everything’s not just about money,” said Boyd.  “It’s fantastic when a company goes far beyond the call of duty and sees a terrible situation and they put their hat and money out for such a wonderful donation.” 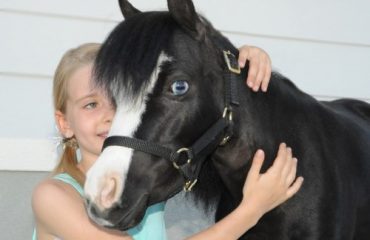 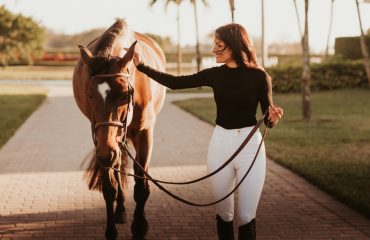 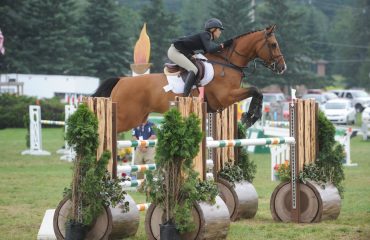 On Course With Charlotte Jacobs