Ariel Grald: Eventing to the Top, From Ponies to The Five-Star Level

In 2011, eventer Ariel Grald felt doubtful of the life path she was on. After earning her bachelor of science in microbiology from the University of Vermont the year prior, she landed a steady job in a research lab. “While in college, I was fortunate enough to have a horse and continue eventing,” Ariel said. “I was used to juggling the priority of school with my passion for horses. I realized, though, that the typical 9-to-5 job wasn’t for me and I wanted to pour more effort into my riding career.”

With that in mind, Ariel took a bold leap of faith. She quit her job, packed her bags and traveled with her two horses to Southern Pines, North Carolina, in order to chase her upper-level eventing dreams.

Ariel’s love of horses was sparked early in life by her mother, Carol Rittenhouse. “My mother always loved horses and purchased her first horse while attending college,” Ariel said. “Riding was a hobby for her, a quiet refuge from her demanding career as an emergency room nurse.”

Living on a farm in New Hampshire meant horses in the backyard was a normal sight. While Ariel was growing up, her neighbors graciously lent their small pony for her to ride around on. When Ariel turned 4, her parents bought her a pony for Christmas — a small gelding named Pinocchio. “My mother managed the herculean task of keeping him hidden from me for several days despite the fact I went to the barn every day,” Ariel said. “After receiving Pinocchio that morning, we turned him out with my mom’s Thoroughbred mares. The mares bullied him, and he crashed through the pasture fence and escaped. I had tears streaming down my face thinking that I had lost my beloved pony. We spent the rest of Christmas day looking for him and luckily, in true pony form, we found him down the road munching on the neighbor’s shrubs, and he was completely fine.”

It wasn’t always smooth sailing with Pinocchio, and Ariel found herself on the ground often. “He wasn’t very broke, so my first several years riding him consisted of getting bucked off daily,” Ariel said. “That pony taught me to ride through the tough spots and never give up.”

Ariel’s personality and determination meant she was well suited to working with a rogue pony, and those same traits would lead Ariel’s riding journey to eventing. “I was about 8 when I competed in my first schooling event,” she said. “The organizers were incredibly kind. My 20-meter circles were more like 30-meter eggs; my pony ducked out of the in-gate during stadium, but they let me continue on and compete cross-country.”

The eventing bug had bitten her and she moved from training at the local hunter-jumper barn to riding at Hitching Post Farm in Vermont. Under the guidance of trainer Rosemary McLaughlin and later Laurie Hudson, Ariel evented Pinocchio through novice before moving on to horses.

With two riders in the family, Ariel’s mom made sacrifices to help her daughter’s career. “My mom was incredibly supportive of my riding growing up,” Ariel said. “She drove me to lessons and shows, instilled in me a good work ethic and always tried to help me make things happen.”

The family’s horses lived at home, which helped cut costs, but when possible, Ariel would exchange barn work with her trainers for boarding her horse at their stables, lessons and the opportunity to ride more horses. “After I outgrew my pony, my mom offered me the ride on one of her horses, a Connemara-Thoroughbred cross mare named Oboe’s Piccolo, barn name Flutie,” Ariel said. “She was the first horse that I started traveling with and I took her to several Pony Club rallies.

“When I was 11 years old, I really wanted a foal,” Ariel said. “There was a stallion breeding auction in New Hampshire and after researching stallions, I decided to bid on the Irish Draught stallion Cradilo.” She poured her whole savings of $900 into the auction only to lose by a few dollars. The stallion owner, Sandy Ladd, heard about young Ariel’s pursuit and sold her a breeding anyway. The resulting foal was Ariel’s gelding Practically Perfect, called Hobbes, whom Ariel went on to compete through intermediate. “He’s still happily eventing at 20 years old with a junior in Vermont,” she said.

Impressed with how Hobbes was turning out, Ariel’s mother purchased a weanling by Cradilo from Sandy in 2005. That mare’s name was LBF Oleagh’s Image, lovingly known as Leah.

­­­­“The original plan was for my mom and I to train her together,” Ariel said. “We quickly realized she was incredibly talented, and my mother generously let me take her over.”

Leah was the horse Ariel packed up with from Vermont and sent to North Carolina when she quit her job and decided to become a professional rider. After winning several intermediate and two-star events, Ariel was named to the 2014 USEF Under 25 Developing Riders list. Ariel and Leah moved up to advanced in the spring of 2015, winning the Carolina International Horse Trials.

“While Leah’s now retired, she was my first winning upper-level horse and still has a commanding presence in the barn,” Ariel said. “My mom passed away in May 2013, so she didn’t get to see Leah event at the advanced level. But I always competed in her memory and knew she was riding along with us.”

Building for the Future

Ariel moved to Southern Pines in the winter of 2012 to work for Karen McCollom, doing barn work in exchange for board. Karen would be a vital connection to Ariel’s eventing future. “Through Karen, I met Annie Eldridge, the owner of Setters’ Run Farm,” Ariel said. “At the time, Annie was looking for help with farm work and exercising a horse or two.” Pleased with Ariel’s riding, Annie offered to pay for Ariel to take lessons with Bobby Costello with her horses. Ariel jumped at the chance, since she had ridden with Bobby briefly in 2004 when he was chef d’equipe for the Area 1 Young Rider team.

“Ariel’s talents as a rider, trainer and horsewoman were evident to me immediately,” Annie said. “But it was her compassion and kindness that made her so special to me. She helped me work through my heartbreak over losing my own riding and eventing career to illness. She had trained her own two horses, Hobbes and Leah, from weanlings to the upper levels, and I was soon caught up in the bright future of her partnership with both, especially the supremely talented but headstrong mare Leah.”

Over the years working together, Annie and Ariel have expanded Setters’ Run Farm beyond the original four horses. In 2014, Ariel traveled to Ireland on a horse-buying trip and found Leamore Master Plan, known in the barn as Simon, a 5-year-old Irish Sport Horse gelding. As a youngster, Simon was a bit unruly on the ground and exuberant under saddle, but Ariel’s meticulous program harnessed his energy and talent and produced him all the way from novice to five-star, culminating in 2019 with a 12th-place finish at the Land Rover Kentucky CCI5* event and 10th place at the Burghley CCI5* in England.

“He still often squeals and bucks under saddle,” Ariel said. “But he thrives under all the attention and travel that come along with being an international five-star event horse.”

“Rory got a late start to eventing and did her first novice in early 2019,” Ariel said. “She finished out the season with a CCI2*-long and will be a serious contender in the future. Annie owns several other young horses that I compete and we’re very excited about them. It’s fun to pick out quality young horses and then train them through the levels.”

“Annie is incredibly supportive and it’s impossible to adequately describe all that she has done for me and my riding career,” Ariel continued. “She has helped me achieve many of my goals and she’s there for every step of the process. We often discuss training strategies and competition plans, and she watches the horses school. Last year, she traveled the U.S. and Europe to spectate at all of Simon’s events. I’m endlessly grateful for the opportunity to train and compete horses for her.”

Importing horses for higher levels of competition is one component of Setters’ Run Farm, and producing quality American-bred event horses is another. With her keen eye, Annie began the careful selection of broodmares to expand her breeding program. With well-researched stallion crosses, her breeding program has blossomed, producing top-notch youngsters. In 2017, several of the Setters’ Run Farm homebreds took top placings at the YEH East Coast Championships, including Champion 2-Year-Old Filly SRF Harbor Moon.

“Neither Annie nor I envisioned this journey, but it has developed into a great partnership that we keep building while looking toward the future,” Ariel said. “I grew up watching VHS tapes of Kentucky, Badminton and Burghley, and the three-day eventing portion of the 1996 Atlanta Olympics. It’s always been my dream to compete at that level. I hope to represent the U.S. at a team championship and continue competing internationally at the five-star level.” 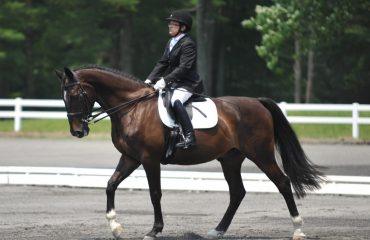 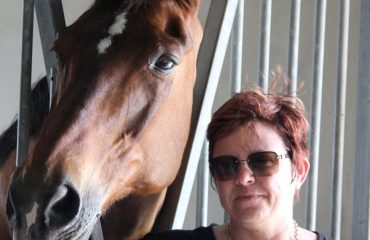