Craig Martin, a former grand prix rider who now competes in Ironman and ultra-marathon competitions can’t stand to be idle. It might have something do to with his genetic makeup.

“I’m from New Zealand, and I was brought up to believe that no one hands you anything,” he said. “New Zealanders are a tough, ingenious, innovative group of people. You fight. You don’t give up. You figure it out.”

Craig competed across Europe as a show jumper for New Zealand prior to moving to the United States.

This determination and drive to succeed has served Craig well, from show jumping in Europe to being a successful entrepreneur to competing in Ironman competitions and now ultra-marathons, all over the globe. Craig says his need to push the envelope is genetic, and that may be true. His father is a successful entrepreneur, his mother was a top marathon runner and his three brothers are all involved in business in New Zealand and Australia.

“My grandfather was into horses, and whenever I was with him, I was hanging around the horses learning because he was a true horseman,” Craig said. “I’m the only one in the family who got the horse bug.”

“I went straight out of high school to England to ride, and I lived in Europe for 14 years,” Craig said. “I competed in horse shows across Europe and did very well. I was long-listed to ride on the New Zealand Olympic team in Athens in 2004 when my horse was injured. That got me to a point where I sat down and took a long look at what I was doing. I decided that I’d had enough of Europe. I had mates there, and we’d converse in English, but they would always go back to their native tongue, and I sometimes felt a bit like a social misfit. I can speak a little Flemish, a little German, but I knew I didn’t want to do this for another 10 years.”

Craig changed the path of his life when he came to the States with Sharn Wordley, his business partner in Wordley-Martin Premium Equestrian Surfaces. “We landed at LAX with six horses. We had no plan, no resources, but we knew we’d figure something out,” Craig said, adding they eventually headed to the show ring. “We went to show at Indio, back in the glory days, when the West Coast was strong, when there were 40 or 50 people entered in the grand prix. That was a great, great, horse show.”

After Indio, Sharn stayed in California to compete on the circuit, and Craig went to Colorado. Eventually, the two men decided to team up and train horses in Ocala, Florida, and after a couple of years relocated to Wellington. It was while Craig was in Ocala that he decided he’d ride more as a hobby than compete anymore.

“In my early 30s, I knew I was getting older, and I needed to take care of my body better,” Craig said. “I’d been banged up quite a bit riding when I was in Europe and I’d basically lived on caffeine and cigarettes. I started to focus on totally changing everything. My diet, my exercise. I decided that I’d get into endurance sports. My mother was in the top 5 percent of marathoners; anytime you run in three hours and change, you’re in the top ranks. I started running and thinking What else can I do to stay physically fit?”

The changes Craig made in his diet and exercise changed the future of his life. “These days, I’m a firm believer in ‘you are what you eat’ and I’m very aware of everything that goes into my body. You could definitely say I’m a health nut.”

What got Craig into marathons, and eventually into Ironman competitions, started with his workout buddy. “My buddy Mondi was a body builder; he was going to a sprint triathlon to sharpen himself up to lean down for an upcoming competition,” Craig remembered. “He dared me to do the sprint triathlon too, because he knew I couldn’t swim. I took the dare, and bet him a hundred bucks that I’d do it and beat him. I had the running part down, and I knew I could adapt to the biking. Swimming was the issue. I went to the YMCA and asked the swimming instructor to teach me to swim. As a kid, I’d been water skiing and surfing with my brothers, but I couldn’t distance swim. I literally had no clue even how to breathe correctly.”

Craig won the novice division, and beat his friend Mondi. “It was very rewarding to accomplish that, especially since I didn’t have the professional gear that I’d invest in later,” he said. “I’d paid $400 for a used bike, and the other people had fancy race bikes. I kind of liked the whole idea of running, biking and swimming coming together into one sport.”

Craig, coming across the finish line in RacingThePlanet: Patagonia 2017. He ran 155 miles in the mountains of Patagonia in challenging weather conditions and finished 19th out of 300 runners.
Photo courtesy of RacingThePlanet/Zandy Mangold

While competing as a grand prix show jumper is mentally challenging, Craig learned that distance swimming is also a mental game. “You can’t touch bottom and swimming 2.4 miles in the ocean is no easy task,” he said. “At the start of an Ironman race, it’s like rugby in the ocean. There are 3,000 athletes churning the water white. To keep from panicking, you really have to control your mind.”

Craig did two more sprint triathlons, finishing in the top three, which put him into the open division. Those successful finishes stepped him up to the next level, the Olympic distance, where he finished consistently in the top five. Then it was time to get serious. He bought a nice racing bike and got a coach, Brazilian Richard Wygand, who was an 18-time Ironman winner and a pro triathlete.

“Richard is a phenomenal coach,” Craig said. “He gets you to believe in yourself. I just went to a going-away party for him and his wife. They are moving to Colorado where there is better care for their son, who was born with a rare disease called nemaline myopathy. When things like that happen to people you know and love, it makes you appreciate everything you have.”

Craig believes his talent comes from having great inner strength. “I’m incredibly competitive,” he said. “I’m resilient and can push through pain. Eventually, I went to my first Ironman and finished in 11 hours, 3 minutes and 47 seconds. Most people can’t break 12 hours, so I was like, Wow, I’m pretty good at this! I just kept on doing it for about six years.

The amount of training required for an Ironman is intense and Craig realized he needed to back off a bit. “My wife, Rae Marie, is really supportive, but for six years, I had been getting up at 3:30 a.m., training 25–30 hours a week, fitting my workouts in around running a business. It’s pretty life-consuming,” he said.

Backing off ‘a bit’ for Craig means he’s now competing in ultra-marathons, which are not the mere 26.2 miles of a regular marathon. After running in a couple 50k races, he went to Patagonia last November and competed in RacingThePlanet, placing 19th out of 300 runners. The event involves running 155 miles in the mountains of Patagonia in challenging weather conditions.

After RacingThePlanet was over, Craig said coming back to the world of Wellington, and back to the business of running Wordley-Martin Equestrian and farm sales with Wellington Equestrian Realty was the ultimate reset.

“Horses are still my passion. I help Rae Marie compete,” Craig said. “I love taking a young horse and bringing it to the grand prix level. I still get a kick out of that. Do I want to get back to that level of riding again? Maybe. I never really said that I wouldn’t compete again. I said that I’d never do an Ironman again, but I am thinking about doing Ironman New Zealand in 2020. I’m always looking for the next thing out there to challenge me, physically and in business as well.”

Rae Marie and Craig in the barn. Horses and running helps Craig relieve the stress involved with working with Wellington Equestrian Realty and co-owning Wordley-Martin Equestrian.

Thanks to his inner strength and determination, Craig has become adept at managing the demands and stresses involved with Wordley-Martin Equestrian and Wellington Equestrian Realty. “There’s a great book, Spark: The Revolutionary New Science of Exercise and the Brain, by John J. Ratey, and it talks about being physically fit and correlating that with business,” Craig said. “I push myself, not just physically, but to grow and develop my mindset to handle the stresses and strains of everyday life. I have so much going on in my business that I call running my escape because when I run, I’m educating myself, listening to audio books. I an Audible fan, so when I’m training, I run for 40 or 50 miles, and it takes 6 or 7 hours.”

While Craig said he has had several good mentors over the years, he never attended college or had any formal business training. “I have educated myself as an adult,” he said. “After high school, I rode horses, so my friends say that I have an MBA in world travel and experience. That’s true, because I’ve worked for some of the most well-off people on the planet. When you’re in front of those people and they expect certain things from you, you learn real quick.”

Whether he’s running his businesses, riding horses or running races, success seems a sure thing for Craig. “I put in 150 percent into everything I do, whether it’s business or a race. I think being competitive is the key to longevity. I don’t leave anything on the line. I’m going as hard and as fast as I can.” 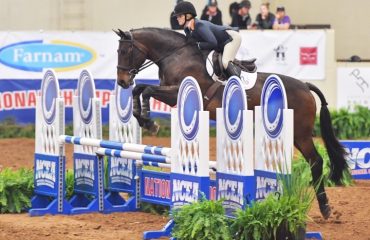 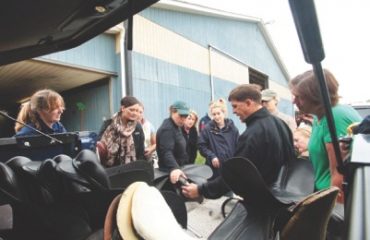