Imagine riding to hounds on a horse trained to fourth level or higher in dressage:  thrilling gallops across open spaces and through woodlands, up hill and down dale.  Your horse is keen, but obedient to your leg.  The field comes to a trappy place and you ask your mount to shorten stride and gather its hocks.  Or there’s a jump situated at an odd angle to a narrow ride and you ask your horse to collect and bend as you turn to the coop…

Iroquois huntsman Lilla Mason knows that three of the basic goals of dressage training – flexibility, responsiveness to the rider’s aids, and balance – are not limited to the arena.  As a matter of fact, she has found that dressage is a vital component in training a good field hunter.

In 2006, before the Kentucky Rolex 3-day event, Iroquois Huntsman Lilla Mason took a dressage lesson with her trainer Elaine Gibala and her hunt horse, Bonus, who five years later, in June, showed Prix St. Georges for the first time: Lilla hunts hounds with this horse and uses dressage training for all the hunt horses in her care.

“I started taking lessons with Elaine Gibala (“R” judge) who has a barn in Winchester (KY),” explains Lilla.  “Dressage became a very valuable resource because every problem I ever had in the hunt field I could solve by using the tools Elaine had given me in lessons.”

In 1982 Lilla took time off from the jumper circuit to complete her education at the University of Kentucky (Lexington) and answered an ad for someone to exercise hunt horses.  She had no experience with foxhunting and fell into her ideal lifestyle, thanks to the Millers, Susan and Jerry, who in 1988 bought a farm in the country hunted by the Iroquois.  Five years later Jerry became MFH and eventually started hunting the hounds; Lilla whipped-in and trained the hunt horses.  A few years ago, she started hunting hounds full-time and nowadays Jerry and his joint-MFH Jack Van Nagell whip-in to her.

“I would take OTTBs to Elaine.  We’ll get one that spooks or bolts, and getting rid of them isn’t an option, because Jerry doesn’t sell horses once they come into his barn,” says Lilla.  “Elaine always had an answer for me.  Bonus was one of those horses.”

By Fred Astaire, Bonus (not his registered name) had reached the end of his racehorse career when Lilla bought him for one dollar from a lady down the road who just wanted good homes.

“Elaine said that I should keep up with dressage for him and it was fun.  He’s a very hot horse and it’s gone in peaks and valleys,” recalls Lilla.  “When I was in second and third level, a handful of times I got whistled out of the ring because he was being so fractious – I guess he scared the judge.  But Bonus can be very brilliant too.  He’s athletic and because Elaine is such a good trainer and puts the time in, she really helped me work through all his problems and here we are, at Prix St. Georges.”

Last September, at the beginning of the 2010-11 hunting season, Bonus was ready to show at PSG, but at the time USDF rules called for a double bridle to do the test.  Lilla recalls working with Bonus in the bit and bradoon, but about two weeks before the show he blew a gasket.

“”He got hotter and hotter – no way was he going to handle that double bridle, so we stayed at Fourth level,” says Lilla.  “Fortunately, they changed the rules and you can do Prix St. Georges in a snaffle.  We ride all our hunt horses in rubber snaffles, and Bonus did his first PSG test in June.”

The benefits of dressage became really evident back in 2009 when Lilla broke her leg the day after the start of the formal season on the first Sunday in November.  She lost all of November and December, but by January she was out of the big cast and pestering her doctor.

Iroquois huntsman Lilla Mason got back to hunting sooner and more safely after the big cast came off by riding Bonus, her upper level dressage/hunt horse. Note the bulky splint and no iron on the dressage saddle, but she felt perfectly comfortable. She does dressage with all the hunt horses.

“I wanted to know why I couldn’t ride,” she admits.  “The doctor said you could fall, you’re going to break your fall with your arm or hurt your leg again.”  I said, “What you don’t know is that I have a fourth level dressage horse and can control every move he makes.”

Lilla knew she had to ride with one foot in the stirrup and one out, because the new cast was still too big.  She also knew that she could go from a walk to a nice collected canter and that she would be right behind Jerry, who was hunting hounds in the interim.

“I knew I’d be absolutely safe,” says Lilla.  “I felt perfectly comfortable and we walked, cantered, nice extended trot.  The funny thing is that I got really excited after hunting Bonus and I called my trainer Elaine and said I never thought I’d have to go to the hunt field to know for sure what ‘forward and through’ is!  If you put a horse like Bonus who isn’t used to being behind someone in the hunt field, all he wants to do is catch up, but I could harness that energy in collection, and that was ‘forward and through.’  All the riding in the ring never showed me what it was like.  Who would think you could learn about dressage out hunting?”

Lilla still considers that the most important thing about hunting her fourth level horse was being able to get back into the saddle sooner and more safely than she could have without an upper level dressage horse.

“What Elaine has given to me is like the Encyclopedia of the Horse and I thumb through the pages or I go to my toolbox,” says Lilla.  “Things like turns on the forehand or shoulder-in – all these things that you learn as you go up the levels in dressage are very applicable in the hunt field.  Most problems occur when your horse tries to take over:  most do try, and I think that’s what scares riders, too.  But with dressage, even thinking about a turn on the forehand will get their attention back on you and you regain control.  It’s a valuable thing for your riding because all that stuff you learn is going to be useful at some future time.”

Bonus is the only one so far to advance that high through the levels.  Lilla has another horse named Farcical, which Elaine thinks is better than Bonus.

“Farcical isn’t a lazy horse, but he’s not a forward horse.  He’s the one I got hurt on because he gets in front and then he won’t go forward,” says Lilla.  “Galloping after hounds, you want a horse that’s hot off your leg.  So we did dressage, and last year people in the field asked me what I did to that paint horse.  Dressage has completely changed him.  He’s a much more useful hunt horse.”

When it comes to hunting a pack of hounds, Lilla has an even stronger argument for the benefits of dressage.  She doesn’t want to be thinking about her horse all the time.

“The hounds are sensitive to my mood and I can’t be encouraging and focused on the hounds if I’m fighting with my horse.  It ruins the harmony,” she explains. “It’s especially important that I have a horse that does as I ask with just as much ballet as the pack of hounds around my feet.  A dressage horse is sensitive to your seat position – you change your weight and they turn.  It’s much easier to do my job as huntsman if I have a horse trained in dressage.”

Lilla gives a fair amount of credit to Elaine, who has taken numerous people and horses to Grand Prix.  An excellent communicator, Elaine trains her students to be trainers and problem-solvers.

“I have never brought a horse to Elaine that she couldn’t solve the problem within a half hour,” says Lilla.  “It doesn’t matter if a horse is running through the bit in front of a fence or even whinnying while he’s whipping-in:  both can be solved through flat work exercises.  I do dressage with all our hunt horses.  It teaches them to carry themselves better and that helps them to stay sounder.  I don’t think I would be interested in dressage if I had gone to Elaine and all she wanted me to do was ride the perfect 20 meter circle!”

Dressage scratches a competitive itch, too.  Lilla didn’t think it was fair to ask Bonus or any of the horses to hunt hard all season, often going 12 to 22 miles each time hounds go out, and then event all summer.

“My goal is to get my gold medal.  I need two scores of 60% to get my silver medal at Prix St. Georges, and it doesn’t matter if I place or not,” says Lilla.  “I don’t have to go to a show again until I get to Intermediaire when I go for my gold medal.  It’s the proficiency level that I want and I can do it without winning every class at a show.

“Dressage freshens a horse’s brain,” she adds.  “I work really hard, then Bonus goes out hunting hounds and he gives a big sigh and relaxes.  I think the same qualities that make a great dressage horse make a great hunt horse.  Bonus always knows where his feet are.  Not to hunt him would be like having a sports car and never driving it fast on country roads.  If you have a great dressage horse, why not take it for a spin in the real world?  Riding a horse like that cross country is the most marvelous feeling.  It doesn’t matter whether you’re out front with hounds, whipping-in, or a member of the field.  Dressage gives you a better horse with a lot of different gears.” 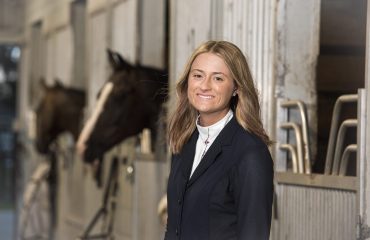 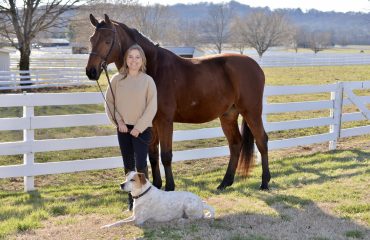 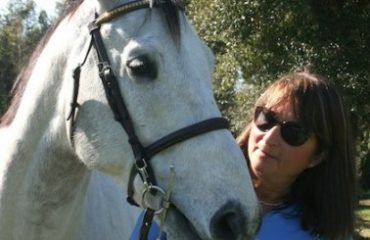