When Jaime Krupnick Geffen does something, she’s all in — whether it’s riding, raising a family, growing her business or reclaiming her health. Though she grew up showing and competing, she put horses on hold, knowing she couldn’t give them her all while she developed her career and started her family. With her own successful event business and a thriving home life, she returned to the saddle after 18 years, found her “everything horse” and began competing nationally.

Still, Jaime knew she could be more. In 2017, she made a total lifestyle transformation that resulted in losing 50 pounds and, more importantly, having more energy to take care of her family, run her business and ride her horse of a lifetime. As she continues to build on — and sometimes combine — each facet of her life, Jaime hopes not only to find continued success but to help others find it as well.

Jaime’s more than a third generation horsewoman, she’s third generation riding at the same farm in Westlake Village, California. “My grandmother, Nedra Diskant, started riding at Onondarka Riding Club many years ago, and when JoAnn Postel and Nancy Turrill left to start Foxfield 50 years ago, my grandmother went with them,” Jaime shared. “My grandmother rode, and my mother rode, and I grew up riding at Foxfield. Nancy gave me my first lesson when I was 3 years old and the picture still hangs in the clubhouse.”

Jaime rode with Foxfield through ponies and children’s hunters, her junior years showing back east including in Medal Finals and earning a USEF Show Jumping Talent Search gold medal, and a year competing as an amateur. But when she moved a few hours from home to attend the University of San Diego, her mother, Claudia Krupnick, took over the rides on her horses — and Jaime wouldn’t return to riding for 18 years.

“I decided it was a time in my life that I needed to focus on school and starting a career, so I did,” Jaime said. “I was a broadcast journalism and communications major, and I dreamed of becoming a news anchor.”

Jaime and Conux look forward to competing in international derbies in 2020.

It didn’t take long for Jaime to realize that broadcast journalists didn’t start out their careers in San Diego or Los Angeles — they moved to a small town far away, and Jaime didn’t want to be so far from family. By chance, Washington University began offering an event management school in conjunction with her undergraduate studies, and Jaime’s decision to participate launched her career in event production.

A year after graduation, Jaime was hired on at Sony Pictures Television at Sony Studios in Culver City, working with events for TV shows including Seinfeld, Wheel Of Fortune, Jeopardy and more. She spent nine years with Sony — where she also met her husband, Jason Geffen, who was working on the movie side of the publicity department. With so much success and experience, Jaime decided to start her own event company while she and Jason started their family.

Jaime’s son, Cole, was 6 years old in 2016 when they moved back to Jaime’s roots, Westlake Village, where Cole could attend the same elementary school Jaime did — and where Jaime could finally get back to horses.

“I had gone back to visit Nancy and JoAnn a lot during my time living in the city,” Jaime said, “but it never really made sense to try to ride because I knew if I was ever able to get a horse again, I wanted to be able to commit my time to it and ride like I used to ride: every day. I wanted a relationship with my horse.”

It started with taking Cole to a lead line class at a Foxfield horse show, when Nancy and JoAnn convinced Jaime they had a horse for her to take a lesson on. “I came out and took a lesson on Rembrandt,” she said. “He was the perfect horse to come back on: He was a saint, and packed me around, an old professor. That turned into going to a couple of horse shows and then I got the bug again and couldn’t stay away.”

Jaime took an 18-year break from riding, but is happy to be back in the saddle now.

Jaime rode Rembrandt for a year, regaining her success in the ring. An old Foxfield friend, Georgy Maskrey-Segesman, has a large horse import business, and generously invited Jaime to help ride the new horses as they came from Europe, giving Jaime the opportunity to ride and show more. That’s how she met Conux.

“I could talk about Conux for days,” Jaime said, very much in love. “Conux and I are very similar in personality. He’s not an easy horse to ride; he’s a big, strong German horse and he didn’t work for others. But from the moment I rode him for the very first time, he and I just connected. Of course I fell in love with him, but he was for sale and was leased out a couple of times, potentially going to be purchased. I rode Georgy’s horses for two years, until I was finally able to start riding Conux full time.”

They trailer to Brookway Stables to train with Archie Cox and meet Archie at shows, but Conux lives at Foxfield, practically in Jaime’s backyard. “I take care of him every day,” she said. “I know everything he eats, I know everything he does. We have such a strong relationship, and I think that really is a reason why we’re so successful together. He really loves to do his job, and if you trust him to do his job, he will do his job. We have an understanding, and it works.”

With their unique bond and mutual trust, it didn’t take Jaime and Conux long to start excelling in the ring. They started out in the 3’ equitation and moved to higher levels, winning several finals along the way. Jaime completed the purchase of Conux from Georgy in early 2019, so the duo has been competing in the amateur owner hunters as well — all the way up to the National Horse Show in Kentucky for the THIS Adult Medal Final and the 3’6” Amateur Owners. “Conux is my everything horse,” Jaime concluded, “and he’s allowing me to do everything I’ve ever dreamed I could do.”

Jaime is more than a third generation horsewoman, she’s third generation riding at the same farm in Westlake Village, California. Jaime and Conux found great success in the show ring in 2019, including riding away as the USEF National Adult Equitation Champion, for the third consecutive year.

Thriving Inside and Out

As Jaime’s journey with Conux continues to unfold, including taking on international derbies starting in 2020, INK Events & Design continues to thrive. Her business covers both corporate and personal events, each of which Jaime loves for different reasons. Occasionally, her horse and business worlds intersect, such as the Foundation Polo Challenge Jaime produced in Santa Barbara for the Santa Barbara Polo Club’s centennial celebration, complete with special guests Prince William and Duchess Kate.

“It’s fun to see those worlds collide, and I have dreams of doing more equestrian-related events,” Jaime said, but she’s passionate about each and every event her company produces. “I would say my favorite is whatever I’m working on. I really take pride in what I do, and I’m careful about the projects I take on because I want to be sure that they fit with my brand and I can produce what they’re looking for. I want to set us all up for success.”

Another equestrian Jaime has done events for is Teddi Mellencamp Arroyave, who in 2017 also inspired a shift in Jaime’s mindset that she hopes to share through her events. “I made a huge transformation with health and wellness: I lost 50 pounds and basically changed my whole lifestyle and got healthy,” Jaime said. “Through that, I learned a lot. I have such a strong desire to teach people that health and wellness is not as hard as it’s made out to be: You can really incorporate it into your life on a day-to-day basis.”

Jaime’s influence starts with her family, and 9 ½-year-old Cole embraces the lifestyle changes. They try to stay active as a family, going for walks or bike rides, and while Cole enjoys the barn and loves Conux, his interests are in other sports. “Cole’s a really great golfer, so I like going out to drive the cart and follow him at his tournaments,” Jaime said. “That’s been really fun to be able to watch his progress, because he’s just as competitive as I am.”

As she celebrates returning to high-level competition after an 18-year break, raising a strong, healthy family and owning a successful business with a team of designers and producers on both coasts, Jaime’s most meaningful accomplishment is the one that will only enable her to do more. 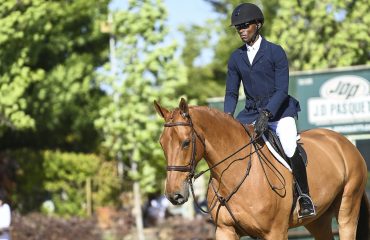 Don’t Rush the Learning Process: A Letter to Our Sport’s Future 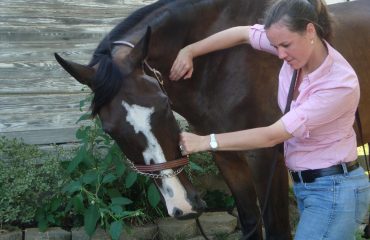 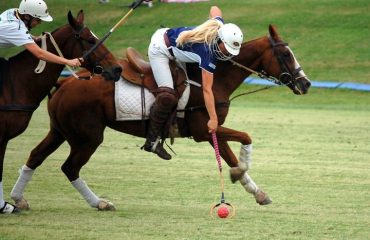