Taylor St. Jacques was captivated by Animal Planet’s series “Horse Power: Road to the Maclay” in 2006. Like many aspiring equestrians, Taylor immediately set her sights on someday winning an equitation final. Big dreams, for a child who had learned to ride just a year prior.

Fast forward 10 years and Taylor was knocking on the door of her childhood dream, earning Reserve Champion at the 2016 Maclay Finals. During her last junior year, Taylor opened the door all the way and made 2017 a year she will never forget by winning the Ronnie Mutch Equitation Championship, USEF Medal Finals and WIHS Equitation Finals.

Taylor isn’t just a “one trick pony.” A fierce competitor with a persistent smile, Taylor has been a force to reckon with in all three rings — equitation, hunter and jumper — and on the Auburn Equestrian Team.

“I want to win every time I walk into the ring. I’ve always been willing to do whatever it takes to be my best and do my best with every opportunity I’m given,” Taylor said. “Having that confidence, work ethic and determination allowed me to win many big classes.”

Another key to Taylor’s success is her innate riding ability: In her first lesson, at the age of 4, she was posting the trot. “I was blessed with natural talent and my horse-loving mom was stoked,” Taylor said. From that lesson onward, Taylor never missed a lesson or opportunity to be at the barn around the horses.

Learning From the Best

Taylor has had the privilege of working with some of the country’s top hunter-jumper and equitation trainers over the years. As a young pony rider, Taylor trained with Winn Alden on her small pony Embellished. However, once he was sold, Taylor didn’t have any other ponies to ride.

“Winn did the best thing for me and my future and sent me to Kim Stewart of Glen Willow Farm. Kim had a lot of ponies and connections. I’m so grateful that Winn wanted what was best for me,” Taylor said.

Moving to Kim meant a move away from the comforts of the Virginia show circuit and a close-knit group of trainers and riders. “You pretty much saw the same people at every show in Virginia. Transitioning to a bigger circuit, all of that was quite different. I didn’t know anyone and the competition was much harder,” Taylor said.

Taylor wasn’t a small fish in a big pond for long. Under Kim’s meticulous guidance, Taylor quickly learned what it took to be a top pony rider and went to her first Pony Finals. “Most importantly, I learned all about concentration and how to deal with pressure,” she said.

As Taylor became a sought-after pony jockey, she often had to rely on the skills she learned about having grace under pressure. Taylor showed ponies for Dr. Betsee Parker with Scott Stewart and Ken Berkley and became the number one pony rider for Bill Schaub’s sale ponies.

“Scott and Ken each taught me how to ride a smooth hunter course and get the best jump out of my horses and ponies every time. It took me some time to get consistent with putting in back-to-back smooth rounds, and Scott was so motivational and encouraging while I was figuring it out,” Taylor said.

Taylor became confident in her riding abilities while working with Bill Schaub and his professional rider Molly Sewell. Her confidence increased so much that she approached trainer Jimmy Toon to see if he had any horses she could ride, as she looked to transition from ponies on to horses and the equitation ring.

Jimmy not only provided Taylor with a horse, he also taught her the basics of equitation and opened even more doors for her. “My first Devon equitation experience was on a young sale horse with Jimmy. We knew he would sell quickly and that’s when the opportunity to work with Andre Dignelli and Heritage Farm presented itself,” Taylor said.

With Andre, Taylor learned what it took to be at the very top of the sport. “I may not have always been the most talented rider in the ring, but I certainly was going to be the one that worked the hardest,” Taylor said.

The lessons learned at Heritage didn’t end in the show ring. Andre taught Taylor how to be a hands-on horsewoman. “He showed me the importance of having a special bond with your horse; how all the behind-the-scenes work is vital in developing a successful horse-and-rider partnership,” Taylor said.

All of Taylor’s hard work developing relationships with her horses and polishing her skills paid off during the 2016 and 2017 show seasons. “It’s still crazy to think about how lucky I got having Charisma and Di Samorano my final two junior years and winning all the classes that I did,” she said.

Taylor didn’t just win, she made history. When she won every class at Devon, including the Ronnie Mutch Equitation Championship, it was something no one else had ever accomplished. “Sharing that moment with Andre is something I’ll cherish forever,” Taylor said.

While Charisma led the way in helping Taylor make history and win her first big equitation final, the 2017 USEF Medal Finals, the win with Di Samorano a week later at the WIHS Equitation Finals was the icing on the cake of Taylor’s equitation career.

“Being able to win the WIHS Equitation Finals with Di Samorano, my own horse that I had developed with the help of Heritage, was an extremely rewarding feeling. I still get goosebumps thinking about it,” Taylor said. “It made me feel as if all my hard work and dedication had finally paid off.”

Like many other top junior riders, Taylor made sacrifices to achieve her riding goals. She didn’t have the traditional high school experience with football games and dances; instead she spent time on the road traveling the circuit with horse friends, attending school online her senior year.

The support of Taylor’s family made it possible for her to achieve everything she did. However, it was the support of her jumper trainer, Lucy Davis, that propelled Taylor on to her next experience: collegiate riding.

“Lucy stressed the importance of going to college. She really encouraged me to dedicate those four years to school, to make me a more well-rounded person,” Taylor said.

Used to having the support of family and trainers behind her, Taylor chose to attend Auburn University because of its tight-knit equestrian team. “The moment I stepped on campus, it felt like home and everyone was so welcoming,” Taylor said.

Now, instead of competing against 30 to 40 girls in a class, Taylor gets to compete alongside them. “Everyone wants to win as badly as I do. Something every Auburn coach, staff member and teammate has in common is we like winning, but we hate losing even more,” Taylor said.

Although being part of a riding team was new to Taylor, the lessons she learned from her early days of catch-riding immediately helped her contribute to the team. “Competing in the NCEA is like catch-riding every day. We only have four minutes to get to know the horse we’re on before we’re expected to go win our point,” Taylor said. “Being able to ride all different types of horses and handle the pressure is vital to the team effort.”

During the 2018-2019 season, the Auburn Tigers were undefeated leading up to the 2019 NCEA Championships. “Being undefeated, everyone was out to beat us. Emotions were high and competition was as fierce as it had ever been,” Taylor said. The championship literally came down to the last point.

After teammate Ashton Alexander competed, Taylor said it felt like it took forever for her score to be announced. “When the score came in and we realized we won, the reaction from the team and parents in the stands was incredible. I’m not one to get emotional, and I shed tears of happiness,” Taylor said. “The only other time I’ve cried was when I won the WIHS Equitation Finals with Di Samorano.”

Not only did Auburn win the 2019 NCEA Team Championship, Taylor was also named Most Outstanding Player for the Equitation on the Flat and Equitation Over Fences.

As Taylor’s time at Auburn wraps up, she’ll begin the process of deciding whether she’s going to go the professional equestrian route or if she wants to pursue a master’s degree. But first, she’s going to finish up the 2021 show season as an amateur with her two horses, Louie and Cola.

With the help of Molly Ashe Cawley and Chris Cawley, Taylor made the difficult transition from being one of the country’s top junior riders to starting fresh in the amateur-owner ranks.

“They’ve taught me to appreciate each horse for its unique attributes. Everything is about making it a good experience for the horse and never asking too much of them,” Taylor said. “The happier my horses are, the easier my job is.”

Together, Molly and Chris have catapulted Taylor to success in the Grand Prix ring. Taylor currently competes in FEI classes at the 2* and 3* level and the High A/O Jumpers.

Like the little girl who watched “Horse Power” and dreamed of winning an equitation final one day, Taylor is focused on big goals again. This time she plans on representing the red, white and blue. “I want to ride on Nations Cup teams and make it to the Olympics someday,” she said. 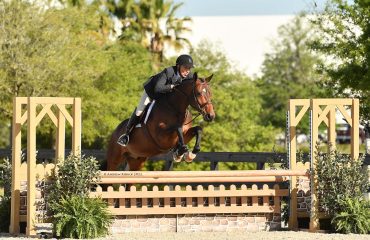 Bill Rube: Giving Many a Reason To Smile 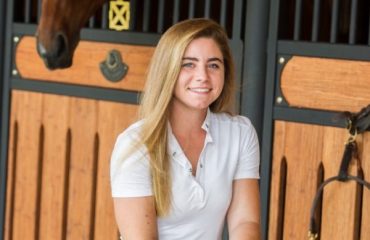 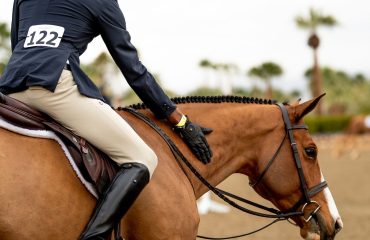 Being an Empathic Professional to Equine Athletes