Some people, like Jacqui Avis, have dedicated their entire lives to horses. Others may never have even seen a horse in person when they decide to spend some time riding the trails from a dude or guest ranch. They ride incredibly calm, well-broke, beginner-friendly horses for a weekend and go back to their lives with some wonderful memories.

In the age of social media, when past guests of one Colorado guest ranch discovered that those diligent horses were being sold at auction, potentially to slaughter, they spoke up — and Jacqui answered.

Jacqui was 12 years old when she first asked to start riding lessons. “My parents told me I needed to get a job, so I got a job at the local barn and that was it — I was hooked,” Jacqui said. “I think I’ve worked with horses every day since.”

After high school, Jacqui went to a riding college in England based around the Thoroughbred industry, which started her off on a career as a racing work rider. “I’ve lived all over with racing: England, France, Australia, Kentucky and California,” she said. “Then I landed in Wellington, Florida.”

Jacqui managed a large hunter-jumper barn and simultaneously worked as a vet tech in Wellington before moving to Colorado, where she’s managed a private barn for almost 12 years. That’s where she met Drifter.

“We went out to a rescue and adopted some horses for the owners, and one of them was a super-lame stray named Drifter with all kinds of issues,” Jacqui remembered. “We rehabbed him to pretty good health and felt he needed a job, so we started looking for a child that wanted to spend some time with him.”

They found Bella, a young girl with cerebral palsy. Bella began learning to ride Drifter and the pair formed a bond that not only gave Drifter the purpose Jacqui was hoping to help him find, but also helped Bella. One Christmas, Bella brought several other special needs friends to the farm and they made horse cookies to give to Drifter and the other horses in the barn.

“It was such a big hit with these kids,” Jacqui said. “So we got them together and started making horse cookies to sell at the local feed stores to raise money to give back to the horse rescue that Drifter came from.”

The heart-shaped cookies became known as Drifter’s Hearts of Hope, and the children would help bring the money to donate to the rescue. But when the rescue wasn’t actively seeking out new horses to save, Jacqui and her little crew took matters into their own hands. “We decided that we would save our own horse with the money,” Jacqui said. “We went to the auction and were going to get a horse — we came home with five.”

A rescue was born. “We didn’t even have a business plan or anything like that,” Jacqui said. “We just fell into it. We started rescuing horses, and it got bigger and better.”

Drifter’s Hearts of Hope (DHOH) began at Jacqui’s house on six acres, but within a few years, her employer offered a vacant property in Franktown, Colorado, to house the rescue. Now, they’ve got 350 acres and a 30-stall barn.

When horses come to the completely-volunteer-run rescue, they’re first rehabilitated, including ensuring they’re at the proper weight and that their teeth and feet are cared for. Then, they’re evaluated under saddle. “The majority of our horses these days come pretty well broke, and we have a few really good riders, so we can handle little issues and we send horses to a trainer if they have bigger issues,” Jacqui explained. “Other than babies, we don’t adopt out horses that aren’t started; if a horse comes to us over a year old, we’ll keep them and get them started under saddle before adopting them out. Educated horses are more likely to stay safe and cared-for.”

DHOH currently houses 50 horses and has successfully rescued over 450, including owner-surrenders, strays, horses outbid from kill buyers at auction and more. The seed planted by Drifter in Jacqui’s willing heart continued to grow.

About four years ago, Jacqui and her team received word through social media of a C Lazy U dude ranch horse at the auction, a chestnut mare named Annie who was gentle, sweet, kid-friendly and simply too old to continue packing guests up the mountain trails. Of course, Jacqui outbid the kill buyer and helped find Annie her perfect retirement family.

Annie’s situation brought a great need to light. “We ended up talking with the director at the C Lazy U, and we came up with the Annie Project together,” Jacqui said. Founded in partnership with C Lazy U in 2017, the Annie Project now rehomes retiring horses from 13 dude and guest ranches in Colorado.

Some ranches choose to sell their horses privately or retire them rather than sending them to public auction and putting them at risk of slaughter, but the Annie Project provides another option that takes the work out of their hands and ensures these well-broke horses find fantastic homes.

“The Colorado Dude and Guest Ranch Association loved it, so they’ve helped spread the word,” Jacqui shared. “The response has been awesome; a lot of ranches are relieved because they have a place to bring their horses that aren’t going to work for them anymore.”

Though DHOH is at capacity, Jacqui hopes the Annie Project will continue to grow. They’re not only reaching out to more Colorado ranches to work with, but hoping to partner with rescues in other states to expand the Annie Project beyond Colorado, all while maintaining the high standards of horse care and adoption that DHOH holds to ensure adopted horses have safe and happy homes.

To keep DHOH and the Annie Project going, Jacqui and the DHOH team work hard on fundraising including annual events, like their summer hoedown with a band, food, auctions and more. They also rely on generous grants and donations.

“It’s all volunteer-run, so time and resources get a little bit limited. We’re starting to spread the Annie Project, and it takes quite a bit of manpower,” Jacqui said. “But we have a great team. Raising funds to keep the program running is our biggest job besides actually working with the horses; it’s a lot of work, but it’s fun, and we meet a lot of great people.” 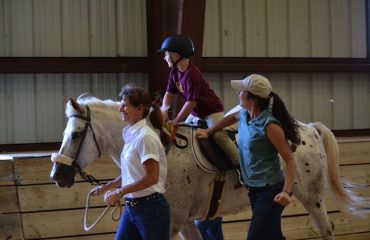 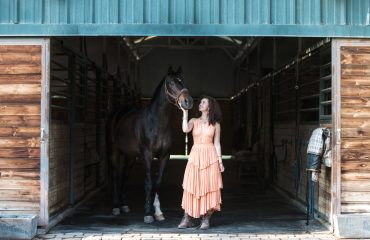