It’s been said, “The harder you work, the luckier you get.” Show jumper Tom Foley may have the luck of the Irish flowing through his veins, but it’s his hard work and determination that have so far defined his career. His drive and hunger to pursue his dreams led him to voyage across the pond to hang his shingle as Tom Foley Show Jumpers in the United States.

Born and raised in Ireland, Tom was first placed on the back of a horse at age 3. “We always had horses around when I was growing up. My sister rode and competed, while my dad foxhunted,” Tom said. “This left the door wide open for me to start riding. Now at 24, horses are all I know. I can’t imagine doing anything else with my life.”

Tom credits his parents for encouraging his love for the sport and cheering him on every step of his journey, from pony rides to Grand Prix wins. “Moving to the United States was a big change for my family. When I was home, in Ireland, my parents were heavily involved on a daily basis and loved to come and watch competitions. Now they have to sit back and watch from afar,” Tom said.

Like many Irish equestrians, Tom got his start with horses and ponies in his backyard growing up. “You learned to ride by just getting on, playing around and having fun. To get more experience, you would venture over to the local riding school or go foxhunting,” Tom said.

“The horse world is very different in Ireland versus the States. The sport is far more affordable, making it more accessible to people who wouldn’t have that same privilege in America,” Tom said. “Unlike the client-based barns here in the United States, most stables in Ireland are predominately sales/livery. The owners who do board at the stables compete their own horses.”

Tom was fortunate to ride innumerable ponies and horses during his early riding career that made him the equestrian he is today. “Each of these incredibly talented horses shaped my riding, skills and ability throughout my career,” Tom said.

In contrast to the United States, the pony jumper division is big in Ireland. Tom’s first foray into the Grand Prix ring was on his very talented small pony, Muskerry Crusader. Together the duo won multiple 1.10m Grand Prix.

After getting his feet wet with Muskerry Crusader, Tom’s dad bought him a foxhunting pony, Cherokee Breeze. His dad liked how the pony jumped stone walls and thought he would make a good jumper. Unfortunately, at first Cherokee Breeze didn’t get the memo he was now supposed to focus on jumping the obstacles in the arena. “Our first couple of shows, he ended up running away with me and jumping out of the ring. Whenever he did, he found his way straight back to the horse truck,” Tom said.

Undeterred, Tom’s dad saw the quality in the pony and pressed on to develop the pony to be successful in the show ring. “Cherokee Breeze turned into a fantastic jumper, winning the ‘pony owners’ (13.2 hands) Grand Prix four years in a row. That pony truly taught me the value of perseverance,” Tom said.

As Tom grew physically and by way of talent, Cherokee Breeze was traded for another pony, Dibidoe, who took Tom to his first 16-and-under European Championship in 2010. Together they would earn team silver as well as being ranked in the top four individually. After a few more years in the ponies, it was time for Tom to move up to a horse and tackle the senior level Grand Prix.

In 2012, Tom was the leading young rider (under 21 years old) in the Munster Grand Prix League on his horse Paddy Fly. Not only did he win a title, he also won a training bursary. A bursary gives a young rider an opportunity to further his training and broaden his experience while working with a top international trainer. At 16, Tom hopped on a plane to the United States to train with fellow Irishman Shane Sweetnam for his bursary.

“Shane told me to call him if I ever wanted to come back and he might have an opportunity for me,” Tom said. “After my initial trip to America, I returned the following winter for three months. I then went home, got my visa and moved back to the States.” Shane kept his promise and helped Tom get his feet wet in the world of professional show jumping in America.

After being under the guidance of Shane for a few years, it was time for Tom to spread his wings and go in another direction. Not straying too far from his Irish roots, Tom spent three years working for another Irishman, Cormac Kennedy, at Mor Linn Farm in Massachusetts. “Working for Cormac opened a lot of doors and I met a lot of horsemen while I was with him,” Tom said. One of those people Tom encountered while working for Cormac was Andy Kocher.

It was Tom’s work ethic and persistence that eventually resulted in a job offer from Andy in 2019. “After Tom left his previous job, he just started showing up at my barn and would ride horses every day for me. He would ride, ride, ride, asking for nothing in return,” Andy said. “I thought, Well, Tom keeps showing up and I need a rider, so it morphed into a paying gig for Tom.”

Tom’s diligence to Andy’s horses and his program resulted in Andy giving Tom even more responsibilities. “I told Tom, ‘I’m going to get you a string of horses, a truck and trailer and you’re on your own,’” Andy explained. “‘Find yourself a groom. I will help you pick the shows and give you some people to contact, but I want you to sell these horses.’”

A mutually beneficial arrangement, Tom hit the road to start his own venture. “Andy has given me a group of sales horses, both young and experienced, to take into my program. I handle the daily training, showing and advertise these horses in the sale market,” Tom said.

Tom has been producing top results for his string of horses at competitions throughout the country. He is currently running his operation of 10–15 horses out of a private barn in Roswell, Georgia.

Tom believes consistency is the key to his and his horses’ success. “I think if you work hard enough, put in the hours and the training, success will come your way,” Tom said.  Even as a young lad with Cherokee Breeze, Tom learned perseverance and consistency will pay dividends in return.

Tom’s program focuses on establishing strong basics and building on a solid foundation in order to deliver valuable results, applicable to all disciplines. “You have to be very consistent in your flatwork and training in order to produce results. You can’t give up on the first, second or third day. No matter how impossible it may seem at the time, you have to trust that consistent work will produce the result you’re looking for,” Tom explained.

Tom strives to maintain a simple and consistent program, allowing his horses to develop properly in due time. “Without routine and consistency, everything goes out the door,” Tom said. “Each horse I train is given every opportunity to succeed and flourish at all levels of the sport. A healthy horse is a happy horse and a happy horse is easy to work with!”

By allowing the horse to get in a comfortable routine day after day, everyone wins. “It can be a slow process, but when it’s successful, it’s so rewarding,” Tom said.

With a great team behind him, Tom is excited to see what the future holds for both him and his business in the coming years.  “Ideally, I would love for Tom Foley Show Jumpers to be a busy barn that’s full with a mix of sales, green, competition and client horses,” Tom said.

However, Tom knows he can’t take all the credit for his accomplishments since he’s moved to the States. “All of my success is due to the team behind me. My girlfriend, Hannah Murrin, manages and takes incredible care of all the horses in my barn,” Tom said.  “Additionally, I have truly enjoyed the opportunities that have come from working with Andy and hope the relationship continues to bring great success to my future.”

Based on Tom’s current trajectory, his future is looking bright. Andy said, “If he keeps himself focused on the business and continues to broaden his skills, he will be incredibly successful.” 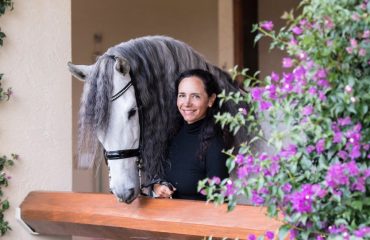 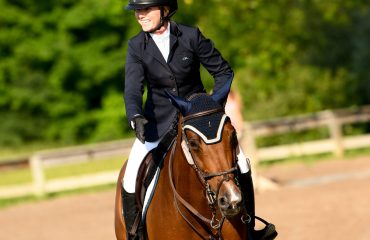