It’s not often someone can transform their passions into their livelihood — even more rare is the selflessness to utilize those passions to give back to someone else. But this is exactly what Colorado artist Barbara Wright has accomplished.

Barbara’s artistic career began as a child, drawing the Disney princesses she had grown to admire. However, her artistic pursuits were temporarily put on hold when she earned her bachelor of science degree in business administration at Cal State L.A. She went on to pursue various careers in international business, including international sales and marketing for San Francisco area toy companies before returning to her passion for art — eventually becoming an artist, illustrator and art gallery director.

Her second passion didn’t begin as a child, however. Barbara became involved with the equine community 15 years ago. Her introduction was as a rescue volunteer in Colorado Springs, Colorado, during the peak of the PMU (Pregnant Mares’ Urine) farm controversy.

Barbara instantly fell in love with horses and acquired two locally that needed homes. She then adopted a PMU foal and, shortly after that, went to an auction to buy more foals but adopted a former Arabian halter champion named Victoor (Vic) instead.

After rescuing multiple horses, Barbara began her own rescue operation in 2002 called Harmony HorseWorks, a 501(c)(3) nonprofit in Conifer, Colorado. She later shifted in 2010 from rescuing to providing a sanctuary (and permanent home) for a herd that she uses in several therapy and riding programs offered at Harmony HorseWorks.

She had no idea how much her new equine sanctuary would impact her art. “When I started the horse rescue, I realized I had all of these wonderful models in my backyard. I studied them every day and it became clear that they were the perfect example of straight lines and curves. As an artist, you tend to paint what’s in front of you and that’s what I did,” recalls Barbara.

Barbara is a self-taught equine artist in the realistic tradition who aims to portray the horse as it is physically conformed as well as capture the personality and breed traits that help make each individual horse unique. “I try to get the personality in the painting so it’s not just a generic Quarter Horse or Thoroughbred because they do have such distinct personalities,” said Barbara.

Vic, the “spokeshorse” for Harmony HorseWorks, is featured as Barbara’s main subject in many large-format acrylic paintings in “A Horse In Art,” a series of 22 paintings in which Vic pays homage to a number of his favorite artists and their well-known works that have also inspired Barbara throughout the years. This exhibit, which debuted in 2010, is available as a complete show to any interested venues and can be viewed online on YouTube.

Barbara also accepts commissions for equine portraits and paints other current or former Harmony HorseWorks sanctuary residents of all breeds. While mostly finding inspiration for her paintings in her equine friends at Harmony HorseWorks, Barbara was also inspired to paint a series of portraits of Native American women based on the book “The 13 Original Clan Mothers” by Native American spiritual teacher Jamie Sams.

In order to keep up with the needs of the sanctuary and its herd, Barbara donates all of the earnings from her art sales to Harmony HorseWorks. In addition, the volunteers help run the sanctuary, which is fueled by donations from the compassionate public.

Among her accomplishments as an artist, Barbara is credited as the inventor of Equine Stress Control Therapy (ESCT), a method of de-spooking horses using bilateral brain integration with bilateral body tapping with the hand or a vibrating bilateral pulser. She also teaches Equestrian Performance Coaching (EPC) based on the PEAT (Primordial Energy Activation and Transcendence) energy psychology, modified for the horse/human riding relationship. This coaching technique helps bring fearful riders back to feeling confident and comfortable around horses.

Combining the two processes of ESCT (therapy for the horse) and EPC (therapy for the human), Barbara helps create a sound and trusting riding partnership between horse and human. Just like her art, all proceeds from sales of books, tapes, clinics, demos and seminars about ESCT are donated back to the horses at Harmony HorseWorks sanctuary.

Ever since she was a little girl, Barbara has had a passion for art, but it wasn’t until she was older that she realized her second passion of rehabilitating rescue horses and providing them with a second chance at life when no one else would. In purchasing one of Barbara’s paintings, buyers are supporting the cause of saving a horse from slaughter, neglect and abuse.

Barbara’s success in turning two of her biggest passions into one very rewarding lifestyle is something to admire and strive for. As the old saying goes, “If you do what you love, you’ll never work a day in your life.”

“Gives Praise” — acrylic on gallery wrap canvas, 3 x 3 — from the “13 Original Clan Mothers” series of Native American matriarchs, based on the book by Jamie Sams.

About the writer: Taylor Renner is a college senior at the University of Georgia majoring in agricultural communications with a minor in animal science. She’s ridden and shown in the hunter/jumper and equitation discipline for 11 years and is an avid photographer and writing enthusiast. She hopes to combine her love of horses and journalism into a lifelong career within the equine publishing industry.

All photos courtesy of Barbara Wright 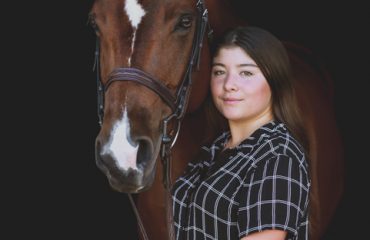 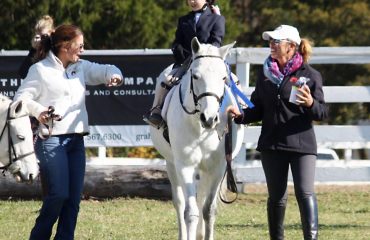 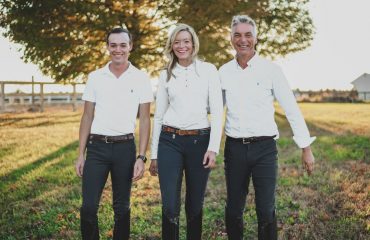