Catching up: Returning champion Elizabeth Boyd had a slew of supporters in the stands for her fourth try at victory in the WCHR Palm Beach Hunter Spectacular, including her husband Blake and baby Elle, brother Hardin, dad Jack Towell and some Finally Farm riders who flew in just for the night including Sarah Orberson-Taylor and her husband Andy. Liza won the class three times, on Brunello in 2010, Fiyero in 2008, and Monday Morning in 1997 and this time she had both Brunello, who she recently purchased, and also Onassis, normally ridden by owner Sarah Ward who is has been sidelined by surgery! Liz didn’t win this year, but she placed third with Onassis. We’re sure that Sarah Ward, the author of Sidelines’ own My Line column, will give us the details on that night in an upcoming issue.

This winter Hillary Dobbs is proving that her talent goes beyond the speedy jumpers. She has been seen putting in winning rounds in the Pre-Greens aboard one of her and fiancé Roy Wilten’s spectacularly beautiful sale horse Thundergod…

Ki-Juan Minors turned every head when he sang the National Anthem before the 2011 Great Charity Challenge during Week 6 of the Winter Equestrian Festival. His pitch perfect, flawless rendition left us all wanting to hear more of his voice. When you make it big, remember that we knew you when, Ki!

So what’s the story? According to The Palm Beach Post, An 8-year-old horse valued at $28,000 disappeared from its Wellington barn and authorities charged Mark Reid, a former employee with stealing it.

We are hearing rumors that makes us unhappy about some very unethical practices… what top small pony now has a tendon or suspensory injury which will require surgery (story is pony wasn’t being ridden then it was put on a lunge line for 1.5 hours and broke)? And what Pony of the Year several years ago recently showed up at WEF with a tail that was nothing more than exposed bone from about half way down…? The trainer that leased her for his client, the owner, and the USEF and steward were notified by a couple different individuals, but really, should it have come to that? We also heard that a horse died recently on the WEF grounds. Story from barn was aneurysm; story from attending blacksmith was magnesium overdose…disgusting!!!  Aren’t we supposed to be horsemen?

On a happier note, Team Zenyatta is graciously donating their share of the proceeds from the sale of the Zenyatta Breyer Horse model to CANTER, Old Friends, and Race for Education. These additional funds will help CANTER continue its work to move ex-race horses into second careers.  To date, the CANTER program has assisted in the transition of over 15,000 horses from the race track to the show ring, hunt field and trails. So get out there and buy that Zenyatta model for the little girl in your life!

From the other side of the pond, we learned that Aloïs Pollmann-Schweckhorst has definitely left the stables of Paul Schockemöhle at Mühlen. It seems Andreas Kreuzer, the bronze medalist at the last European Championship for Young Riders in Jardy, is the new main rider in at the giant stable. Andreas took over the stallion Chacco Blue (Chambertin), which jumped at Top Level last year.

Jessica Kuerten confirmed that she’s not showing the horses of Lady Forbes these days. “The horses are still at my barn and are well taken care of. We train them every day. It’s a really sad situation, but I can’t tell anything more. That is the job of the lawyers.” Jessica lost the ride on Libertina, Cosma, Myrtille Paulois and some other mounts. But all is not dark: Wiebke Van De Lageweg gave her the ride on VDL Harley (Heartbreakerand she won the VHO Cup on him at the KWPN stallion approvals.

More news from Europe may be old news to you by now, but it’s important to note that Sven Holmberg, who ran unsuccessfully for the presidency of the International Equestrian Federation (FEI), recently resigned as chairman of the Jumping Committee and from the powerful FEI Bureau citing “politics and power games” in the body that governs worldwide horse sports. The USA’s John Madden of Cazenovia, New York, deputy chair of the Jumping Committee, takes over as acting chair immediately. The position will be filled on a permanent basis at the General Assembly in November.

The Annual Vinceremos Therapeutic Riding Center’s Benefit Auction Dinner & Dance was held Friday, February 18. It was a huge success, as all 22 of the center’s horses were adopted. Chairwoman Tuny Page, Young Professionals Chairwoman Devon Kane, and Celebrity Hostess Tami Hoag headed the event that was held at the International Polo Club Palm Beach in Wellington, Florida.

Todd Minikus just can’t get a “break” – or can he? First he was sidelined with a rather painful kidney stone, and just when that had passed, he was felled by a broken collarbone! Heal quickly, Todd!

Congratulations to Phelps Media Group, recently awarded the Wellington Chamber of Commerce Business Excellence Award. This is quite an honor and well deserved by a talented team of writers and photographers headed up by company owner, Mason Phelps.

Eric Lamaze landed a “timely” new sponsor over the winter circuit – that’s right, he’s the newest face of Rolex! If that’s not a sign of success, we don’t know what is. Unless you count making the Top Four at WEG, the Olympic gold medal. . . in any case, good for you, Eric.

Horse Show News: The Carole and Jim Looke Family Fund are sponsoring the $50,000 USHJA International Hunter Derby at the Spring Gathering Charity Horse Show in beautiful Katy, Texas. Good reason to be there! 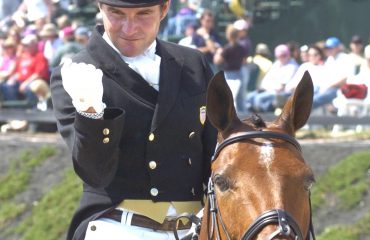 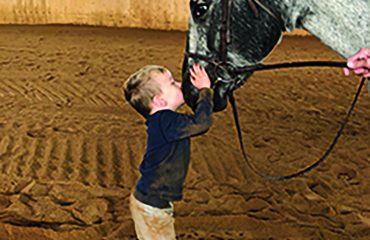