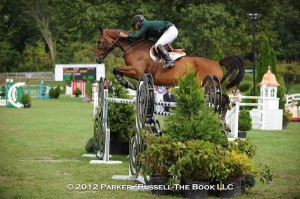 North Salem, NY-September 16, 2012-Peter Leone, aboard Lincourt Gino, sailed to the win as the only double clear horse and rider combination in the starting field of 29 at the $200,000 American Gold Cup at Old Salem Farm in North Salem, NY, on Sunday.

The day dawned cool with fluffy clouds dotting the sky, while the wind billowed the tents dotting the show grounds. The weather throughout the week in North Salem has been ideal for riders and spectators alike. 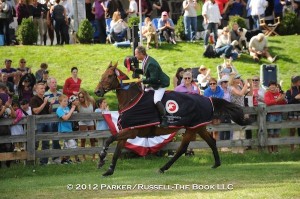 Leone said he strategized to maximize the win. “So, I went quite fast,” he continued. “I thought very fast. But I went around to the liverpool, the second to last jump, to maximize the probability of going clear and put just enough pressure on McLain to force him to go inside and make a mistake.”

Leone, indeed, poured on the juice in the jump-off as he sliced the left turn between the oxer at #3B and the single at #4, shaving precious time off his ride. Gino was happy to oblige and handily galloped through the rest of the eight-jump course. Gino is a 9-year-old Irish Sport Horse gelding owned by Monica Carrera, a junior at Endicott College.

Ward, a two-time Olympic Gold medalist, who rode last, knew he was going to have to trim some time after Leone’s clear round. The 12-year old gelding, Antares, stumbled between the oxer at #3B and the single at #4, putting Ward at a disadvantage.

“Obviously, the ground was just breaking away a little bit there on the turn after the double, and my horse stumbled and it threw my clock off a little bit,” Ward said. “I didn’t know exactly where I was at and I think I just took too risky a turn on the liverpool and got there a little bit unbalanced.”

Farrington, 31, rode Voyeur, a 10-year-old Royal Dutch Warmblood gelding, second in the jump-off. He also knew what he needed to do after Madden knocked a rail down at the green and white oxer at #3B. 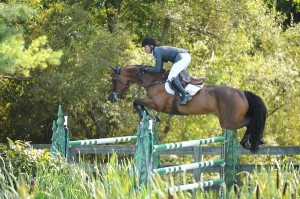 “Beezie went with a rail down, but with two coming after me, I thought Peter would probably be able to go slow and clear,” Farrington said. “And I thought McLain would sort of decide where it ended up. So, I also took a risk: I did one less stride into the double.”

Voyeur jumped the first wall of the double on #3 high and then knocked down a rail on the second jump, the oxer at #3B, an obvious bugaboo during today’s American Gold Cup competition.

I actually thought my horse covered the distance OK and he jumped so high coming out he just didn’t get to the back,” Farrington continued. “In hindsight, it was probably just too extreme for the class. It was unnecessary. So, that was my error.”

Farrington said the course design was typical of designer Steve Stephens. “That was something you don’t see every day, you know, a wall to an oxer or even a wall and a combination, but especially with a single wall that’s very airy like that–one stride right by the in gate, downhill to an oxer,” he said. “You know, a lot going on.”

Ward liked the design. “I thought the course today was very good,” he said. “It was big. It was in front of you. There were no traps. I thought the double verticals up at the end of the ring was a bit of an awkward lie on the hill and you needed a horse with a bit of experience to handle it. The last jump was two meters wide. You don’t see that very often. It’s a big old-fashioned fence and it caused some problems.” 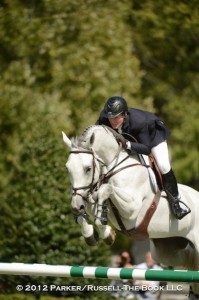 Madden, a two-time winner of the American Gold Cup and first in the order of go, also had a problem when she and 10-year-old Cortes took a rail at the green and white oxer on the #6 jump.

“Had I been clear, I think it would have been in the same situation Peter was in,” Madden said. “I think I would have put at least enough pressure on them that, hopefully, they made enough mistakes trying to catch me. But I think my plan was good. I could probably have gone a little wider on the #6 there and made a little more room as he got a little underneath at #6. He has such a big stride.”

Madden added that the location for the American Gold Cup was fantastic. “They’ve done a beautiful job with the back area,” she said. “The stabling is nice for the horses.   Especially with this number of horses, it feels very roomy. I think the field is beautiful. I think it’s kind of a partnership here with the facility and Stadium Jumping, so I think it makes for somebody who really wants this to be special. It’s refreshing.”

Leone agreed. “It’s a five-star facility, without question,” he said. “We all grew up and spent the majority of our lives going to Gene Mische shows and watching him take this sport from relative nothing to the sport that it is today. There’s a sense and tradition and I’m glad that Stadium Jumping has such a marquee event.” 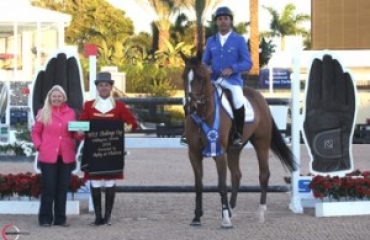 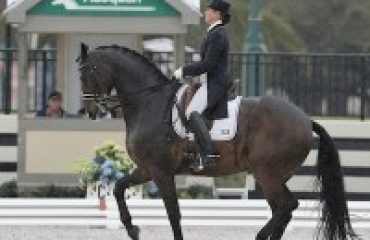 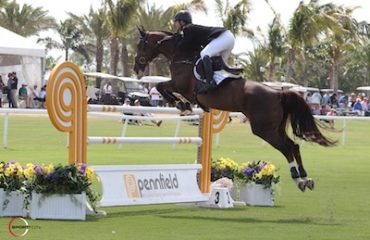