Wellington, FL – February 10, 2013 – Week five of the 2013 FTI Consulting Winter Equestrian Festival (FTI WEF), sponsored by Adequan®, concluded on Sunday afternoon with a win for Olympic gold medalist Ben Maher of Great Britain aboard his young mount Quiet Easy 4 in the $25,000 Suncast® 1.50m Championship Jumper Classic. Maher has been a dominant force in Wellington over the last two weeks with back to back grand prix wins, including last night’s $82,000 Adequan CSI 2* Grand Prix. He can now add a 1.50m victory to his tally for the winter.

Madden and Abigail Wexner’s Mademoiselle were first to jump-off and had one rail down in a time of 49.775 seconds to finish third. Maher and Mrs. Phillips Quiet Easy 4 jumped next and set the unbeatable pace of 48.631 seconds with their clear round over the short course. Amaya and Avequest, LLC’s Cartier jumped a clear round in 52.893 seconds to finish second. Kraut and Evita Group’s Nouvelle were last to go and finished fourth with four faults in 51.185 seconds. 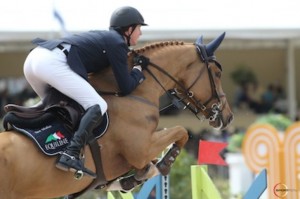 Maher has had several top placings with Quiet Easy since the start of the circuit, including a very close second place finish in this week’s $33,000 Ruby et Violette WEF Challenge Cup Round 5. Quiet Easy had some time off in 2012 while his rider focused on the summer Olympic Games, so Maher is now bringing him back to top form and this was the pair’s first win of the winter season.
“This has been a great week; all of the horses jumped well,” Maher smiled on Sunday. “Quiet Easy was unlucky in the WEF on Thursday; we just got beat. It was a very fast jump-off, so to come back today and jump two good rounds after such a fast jump-off just shows his character. He is trying to always do the best he can for us. The jump-off was again quick today. He naturally turns very well and he is quick through the air. He almost didn’t jump today because he jumped so well on Thursday, but he seems to enjoy this ring here, so I think it was the right decision.”
Quiet Easy is a nine-year-old Oldenburg gelding by Quidams Rubin x Zapateado. Maher got him just before the FTI WEF circuit last year and started him in the 1.50m classes with a second place finish overall in the series last season. He hopes to continue that success this year.
“He had a pretty quiet summer because of other commitments and things, so I jumped a lot of national classes. I sort of gave him a bit of a break and aimed to bring him back here,” Maher noted. “It has really worked because he is jumping very well. He has been a pleasure to ride.”
Sunday’s class was a difficult one for a lot of the horses and riders entered. Maher credited fellow Brit Bob Ellis on his design.

“It was a big course,” Maher stated. “It was the first real class where we have had to jump the water. Both of my horses jumped it very big the first time in the season, but they have to see it at some point. The course progressively got bigger as it went on and I think the last line in particular got half of the class. It was a very long distance down from the Liverpool to the oxer and then a very short outside seven strides to a hard combination. I think most of the faults, from what I saw, came from there. Bob Ellis is a clever course builder. He knows what he’s doing and the slightest angle on something here and there can make all of the difference.” 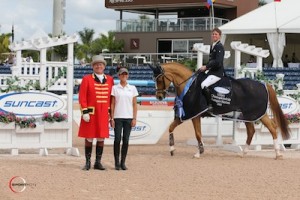 Maher plans to show Quiet Easy again next week and will then give him a couple of weeks off while he heads to China to show in the Longines Hong Kong Masters with his top horse, Tripple X III.
Final Results: $25,000 Suncast® 1.50m Championship Jumper Classic

Presented by Dutta Corporation in Association with Guido Klatte

Sunday’s competition began in the morning with a win for 17-year-old Kalvin Dobbs, of Carmel, IN, aboard Treesdale Farms’ Winde in the $15,000 Artisan Farms Young Rider Grand Prix. The class, presented by the Dutta Corporation in association with Guido Klatte, saw 39 entries jumping the course set by Bob Ellis. Nine went clear to advance to the jump-off, and Dobbs and Winde breezed through the short course in 41.928 seconds for the victory. Chloe Reid and Damascus placed second in 42.385 seconds. Lillie Keenan and Chansonette Farm, LLC’s Londinium were third in 43.015 seconds.

Click the link to watch an interview with Kalvin Dobbs!  http://www.youtube.com/watch?v=0hnsWcwhgbw

Kalvin Dobbs is trained by Abigail Blankenship as well as Olympian Laura Kraut, and purchased Winde from Kraut after she showed the mare two years ago. Winde is a ten-year-old KWPN mare by Numero Uno x No Limit. She is a very energetic, forward ride, and Dobbs explained that she has taken some getting used to.
“She is just so much fun,” he stated. “She has so much energy and she is by far the hottest mare that I have ridden, so it has definitely taken some time to figure her out and get used to that. I have had a lot of slow jumpers before her, but she knows what she is doing every step of the way, so when we are together it is so much fun. I love showing her and we have really gotten to know each other over the past two years.” 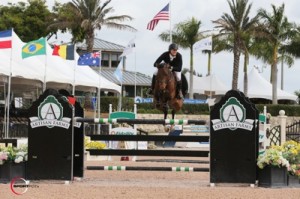 “Her ride has definitely been different for me,” Dobbs continued. “The number one thing that Laura has been trying to teach me is to let her do what she wants to do and you just concentrate on the next jump and what you are doing. That has been hard for me when she kicks back and cross canters and stuff like that. I have to try to keep my focus and I think it has made me a better rider because then with other horses, if there is anything going on, I am able to just ignore it and move on and make the best of the situation.”

It took a fast, accurate ride to win in the jump-off. Dobbs described his plan, stating, “The jump-off just seemed like a horse race to us. It was so many singles and that is her favorite thing to do, just gallop and get it right out of stride, so my plan was just to guide her, shave off those turns, get that time off and keep the gallop going. That is exactly what she did.”

This is Dobbs’ third year competing in the young rider grand prix series and he enjoys the opportunity to improve his riding. “I love it. I think it is awesome for us to be able to come down here and do these big competitions with lots of good riders,” he declared. “They have the team competition week nine and I just think that is an excellent opportunity. This is the first year that I have been able to stay down here and get more training, so I am just kind of soaking it up and getting as much as I can. I love that they offer this young rider series.” 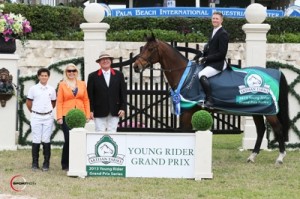 A special award was also presented to young rider Katherine Strauss for Best Turnout at the jog for Sunday’s class. Strauss won a pair of ARIAT paddock boots for her efforts.

Blueberry Hill took home championship honors with Coco Fath in the irons in the Florida Community Bank Small Pony Hunter for the second time this season at the FTI Consulting Winter Equestrian Festival. Fath and Blueberry Hill, a 12-year-old Welsh Pony cross owned by Jordyn Rose Freedman, dominated the over fences portion of competition across both days. The pair won three out of four over fences rounds and placed fourth in day one’s under saddle class. 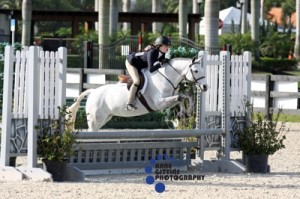 Fath only began riding Blueberry Hill a few months ago, but from the first time she sat on her, she knew that Blueberry Hill would be her perfect partner. “When I first tried her, I knew we would be a good match. She has this feeling where you know she’s always going to go and she always wants to be in the ring. She’s never bucking around or misbehaving. She really wants to go in and win,” Fath described. “She’s worked out really well for me and I love her.”

Fath’s description of the duo’s performance thus far at the FTI WEF is a slight understatement, as the two also took home the tricolor title for the division during week two. Fath and Blueberry Hill are second in the circuit championship standings going into week five.

Fath attributes their success to Blueberry Hill’s willing demeanor and natural talent. “She does tight turns really easily and she’ll land on the right lead every time you ask her to. She has a jump that’s really smooth,” Fath stated.

Fath had a rocky start in day two of competition, but regrouped to come back with a victory in the handy round. “The first course was my fault,” Fath acknowledged. “In the handy, a lot of the tight turns were a little awkward, but she managed everything so well.”

2013 is Fath’s first season competing at the FTI WEF, an experience she has relished. “I like how there’s a new horse show every week here! You don’t have to wait a few weeks between shows. I also love having all my friends in Florida showing with me, it’s really fun. We all have sleepovers since we’re all only a couple minutes away from each other now,” Fath smiled.

Week five of the FTI WEF, sponsored by Adequan, concluded with Sunday’s competition. Week six, sponsored by Spy Coast Farm, gets underway on Wednesday, February 13, with another full line-up of exciting equestrian competition running through February 17. 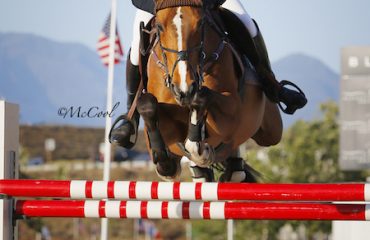 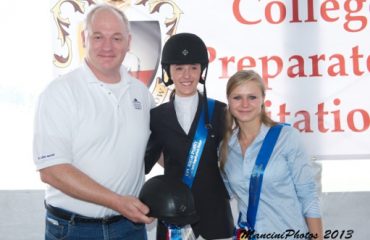