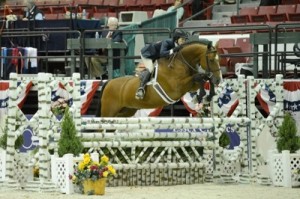 Upper Marlboro, MD  – Eight championships were awarded today at the Capital Challenge Horse Show presented by The Gochman Family, honoring the best hunters in the country. Along with the Second Year Green Working and High Performance Hunter divisions, championships were given in five Future Hunter divisions and the Performance Hunters 3’6”. The Capital Challenge Horse Show, held at the Prince George’s Equestrian Center in Upper Marlboro, MD, runs through Sunday, October 7.

The $25,000 WCHR Professional Challenge has increased prize money by $10,000 since last year. Stewart commented, “I think it’s great. This horse show is always the best with having special classes and having more prize money is fantastic.”

Trendy, an eight-year-old Holsteiner gelding by Cassini I, also shows with his owner, Caroline Kellogg, in the junior hunters, and only started in the Second Year division this summer. Boyd showed Trendy this year at Blowing Rock, Vermont, and the Buffalo International. Along with Kate Conover, Boyd has shown Trendy to victories, and with help from trainer Sandy Lobel of Ravenswood Farm, the horse has grown beyond his experience.

Sandy is a great rider on the flat, so I said, ‘Here’s a couple of things that I want you to do on the flat for me.’ So off the left turn in the handy, he’s a little more supple. She sure did it. This was a hard handy (course), especially off that left inside turn. His mouth was like butter, due to her,” Boyd explained.
Boyd said of Trendy, “He’s just a super horse. He went in there and didn’t put a foot wrong. He didn’t touch a jump the whole time. He was perfectly prepared.”

Lobel noted that there is not much to do for preparation of Trendy. “I’m not a big believer in schooling,” she revealed. “If my horses can’t walk in there cold and I bought them for a junior or an amateur, I don’t want them. I have to have a horse that will go from that stall to that ring and take my people around, and that’s exactly what he does.”

“It’s a great team there at Ravenswood,” Boyd said. “He has a special owner in Mrs. Kellogg, Caroline’s grandmother. She’s a really dear lady. Sandy and her whole staff are really special people. It’s just a fun team to ride for.” 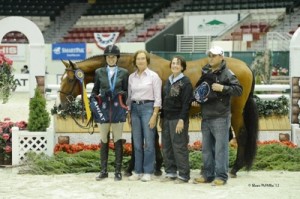 Lobel praised Trendy’s “heart, and his eye.” On his performance this week, she noted, “He just stayed consistent. He kept knocking at the door. That’s what you need to do. He’s a brilliant jumper. I can’t tell you how lucky I am; I could almost cry. It gives me chills to think about how lucky I was to get the horse.” 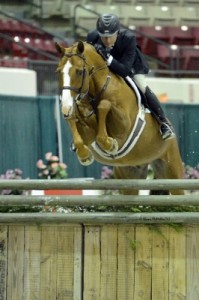 It was a close race in the High Performance Hunters this year between eventual champion Garfield and reserve champion Quatrain. Garfield and Scott Stewart, who rode for Alexandra Crown, won three over fences and picked up another two second places. Quatrain and Elizabeth Boyd, riding for Finally Farm and Janet Peterson, had a win and three second places over fences and were sixth under saddle.

Garfield, a 10-year-old Holsteiner gelding by Coriano, is a regular in the winner’s circle, but Stewart has shown him sparingly this year since he has been in the show ring with owner Alexandra Crown in the junior hunters. Stewart noted that Garfield hadn’t jumped since the Hampton Classic Horse Show, but he felt completely on this week.

This is the best show I’ve had on him. He was good at Washington last year but this was even better,” Stewart said. “He’s such a scopey horse. He could probably be a grand prix horse. He’s one of the easiest ones I have and is really straightforward.” 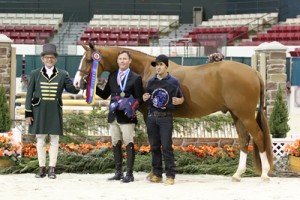 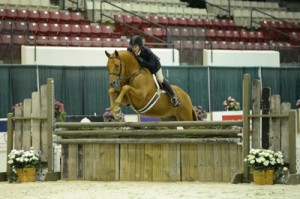 Pletcher remarked, “He’s amazing. There are very few horses that come along in your  lifetime that are that special and he is for sure one of them. He’s just a horse of a different caliber. He always tries. Every time I’ve ridden him and shown him, which is not that much, he always tries. He’s a dream to ride. He likes being the center of attention and I don’t think you could ask for a more straight-forward horse.” 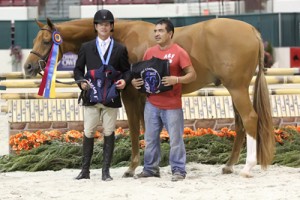 The Future of Hunter Sport Compete for Tricolors

The Future Hunter 6 & Over division championship sponsored by New Hope LLC/David Belford and Christopher Payne, went to By The Way, ridden by Jeff Gogul for Ruth Kanner. The eight-year-old Warmblood gelding finished first in both over fences classes today. The reserve champion was Paramour, ridden by Scott Stewart for Rose Hill Farm. They placed first over fences and in the under saddle.

Gogul has worked with By The Way for two years, and despite his older age, they have worked slowly to bring him along. Gogul mentioned, “He hadn’t had a big career jumping in Europe. He had some dressage background. He knew how to jump and the pieces were there. You didn’t have to train the jump, but he didn’t have a lot of lifetime experiences. Everything was new. We’re in no hurry. I’m lucky to have a client that has no agenda other than what the horse is ready to do.” 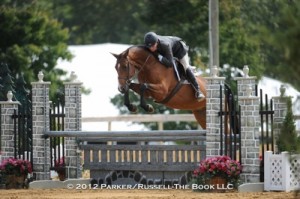 By The Way and Jeff Gogul. © Parker/Russell – The Book LLC

By The Way finished sixth in last year’s $20,000 Added North American Future Hunter Championship, and Gogul is looking to improve on that performance this year. Since last year, they have “worked out little kinks about his personality and what makes him tick, getting it that consistent. The year of traveling and horse shows, he knows to stay focused now when he steps in the ring.” 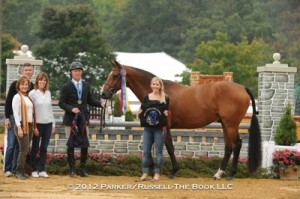 Gogul was very pleased with the way his horse rose to the occasion. “Today in the second round, I really felt like I hardly made a single adjustment to meet a jump properly. I just sat there and enjoyed it. I did nothing but concentrate on staying out of his way and letting him do what he knows how to do. It’s a good feeling!” he smiled. “He’s super comfortable, super balanced, always shows you a nice distance, and always gives you a great feeling in the air. He’s very fun to ride.”

Scott Stewart picked up the first championship of the show in the Future Hunter Colts & Geldings division sponsored by Boggs Hill on Quest, a five-year-old Warmblood gelding by Verdi that he owns. They were first, first, and fourth over fences. The reserve champion, Mariano, was ridden by Sandy Ferrell for owner Stephanie Riggio. They placed first, fourth, and fourth over fences and won the under saddle. 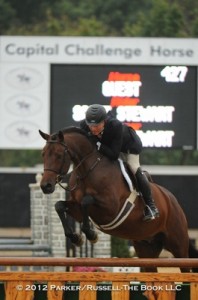 This was Quest’s fourth horse show ever since Stewart purchased him last year. He described, “He’s a beautiful jumper, a beautiful mover, just beautiful and easy. He’s not a big horse, but he’s scopey. I think he’s going to end up being a Regular Working horse. You don’t have to work on his jump at all. It’s pretty perfect on its own. You just don’t have to mess it up.” 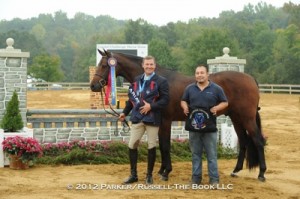 Stewart took another championship in the Future Hunter 5 & Under sponsored by Greener Pastures Equine with Concept, a five-year-old Holsteiner gelding by Contendro. He won two over fences classes and was third in the other class. He added a sixth place in the under saddle to take the top tricolor. The reserve champion was First Dance, ridden by Elizabeth Boyd for Sarah Orberson. The pair were first, third, and fourth over fences. 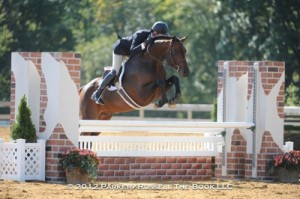 Stewart found Concept as a two-year-old, and he has the same breeding as another top horse that Stewart rode, Empire. It is also Concept’s fourth horse show, and Stewart believed that he and Quest are “pretty equal.” Before Concept was gelded, he was bred and Stewart said that he has three beautiful babies on the ground now. Stewart finds the “C” line of Holsteiners to be ideal types for the hunters. “They’re good types,” he said. “ They look like the model winner and are really pretty.”

In the Future Hunter Mares sponsored by Ravenswood Farm/Penelope Ayers, Sans Souci took the championship ribbon with rider Havens Schatt for owner CH Farm LLC. They won two over fences classes as well as the under saddle class, plus added another sixth place ribbon. Stewart and Joyful, owned by Rose Hill Farm, finished second in all four classes.

Although Sans Souci is 10 years old, Schatt said, “She doesn’t have a lot of experience. This might be her sixth show.” 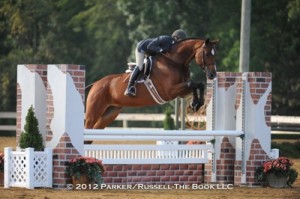 Schatt was happy to have Sans Souci back in action after an extended break following a recurring injury. The mare showed in Florida this winter, but Schatt noted she “just didn’t feel like she was right,” despite still winning classes. They gave her more time off, and just went back to showing weeks ago at the Kentucky National.

She’s still a little fresh, but she’s such a quality horse,” Schatt said. “She is very smart. She goes in the ring and might shake her head, but when she’s heading to the first jump, she becomes all business. A mare that has some blood, you wouldn’t expect her to focus. She’s still not at the best she can be because I know she can be more level.”

Schatt also took home the championship in the Future Hunter 3’3” division sponsored by Pegasus Show Stables/Christa and Michael Endicott and Hunt Tosh Inc. This time it was with Bacardi, a six-year-old KWPN gelding by Casco owned by Caroline Moran. They were first, second, and second over fences and finished fourth in the under saddle. The reserve champion ribbon went to Exclusive, ridden by Nick Haness for Tracy Sully, who won two over fences classes.

She said with a smile, “He’s the best. He’s a little bit of a character at home. When he walks through those gates, he wants to win. He’s so easy to ride. We know each other so well now. It’s a great partnership.” 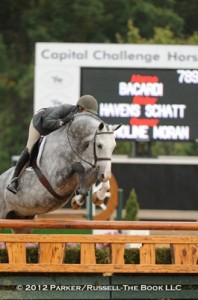 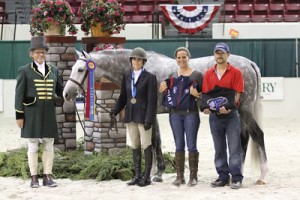 Schatt and Bacardi have been together for two years and they won the Grand Future Hunter Championship at last year’s Capital Challenge. Since last year, Havens said that the talented grey has become “stronger and mentally more secure about what he’s doing.”

She resisted moving him up the First Year Green Hunters this year, feeling that he needed one more year at the three-foot height. “I knew if he went to bigger shows like Devon and I needed to call on him, he was going to be a little shy,” she revealed. “It takes him a week to get back and now he’s back to how good he was last year. I think the experience for next year in the 3’6” will be just like it has been this year.”

Competition for the professional hunters continues tomorrow with championships for two sections of the First Year Green Working Hunters, Green Conformation, and Regular Conformation. The Amateur-Owner Hunters begin their competition as well.

During the day, the Future Hunters will return for head-to-head competition in the $20,000 Added Future Hunter North American Championship, and the Grand Future Hunter Champion will be crowned. The best under saddle horses will compete in the World Champion Senior Hunter Under Saddle class.

In the late afternoon, the first rounds of the WCHR Professional Challenge and WCHR Emerging Pro Challenge will be held. An awards ceremony will start at 6:30 p.m., which leads into the final rounds for the two Challenge classes. 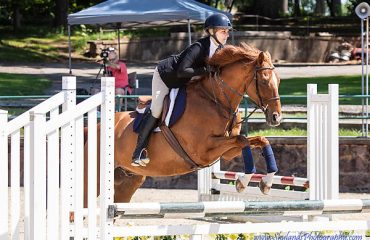 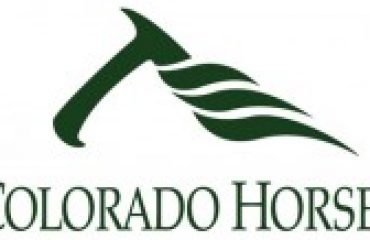