Temecula, Calif., Nov. 3, 2013—Almost nothing about the Galway Downs International Three-Day Event worked out like Buck Davidson expected. Except that he came here from Pennsylvania to win the CCI3*, and he did, on Petite Flower, scoring 59.2 penalties. 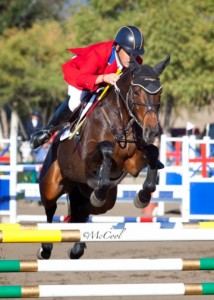 Davidson had long planned to bring his other two horses, The Apprentice and Absolute Liberty, but he didn’t decide to bring Petite Flower until about a week before the event started, after she’d not finished the Fair Hill CCI3* in Maryland three weeks ago. And then the three horses’ performances in the three phases sometimes made Davidson feel as if he was riding on a rollercoaster.

“Nothing really happened like I expected this weekend,” said Davidson, 37, shaking his head and savoring the win, his second career CCI3* victory. “But I do know that Petite Flower is world-class. I know that beyond a shadow of a doubt, and it’s my job to bring it out in her.”

Petite Flower, 11, won the Cooper Trophy as the winner and the new Livingstone Award at the highest-scoring Thoroughbred in the CCI3*. Rise Against, owned and ridden by Bunnie Sexton, won The Jockey Club Thoroughbred Incentive Award as the top-scoring Jockey Club-registered Thoroughbred. Rise Against finished in fifth place. 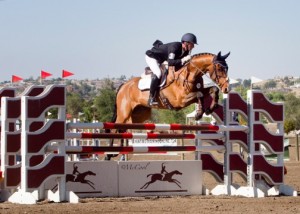 Davidson’s margin of victory was just .5 points, since Petite Flower knocked down one rail, just after Wentworth and GoodKnight jumped a perfect round to keep the pressure on.

“He’s typically a really good show jumper, so I was hopeful,” said Wentworth of GoodKnight, 11. “As long as I don’t make a mistake and panic, he can do it. Luck was on our side today.”

GoodKnight and Wentworth, 32, finished second in the CCI3* in 2011 and fourth in 2012.  “He always runs well here, and Galway Downs has been a part of my life since I was a young rider, so there are a lot of incentives for us to come here every year,” said Wentworth, of Crockett, Calif.

Halliday-Sharp grew up just 20 minutes away from Galway Downs, and this year she decided to return to Galway Downs from her home in West Sussex, England, where she’s lived for 14 years. Her quick cross-country round on Saturday and her faultless show jumping round on Sunday propelled her to third place.

“It was kind of a leap of faith to come here, and I’m glad I did,” said Halliday-Sharp, 34. “I’ve seen people I haven’t seen in 20 years, who came here because they saw in the local paper that I was competing. It’s been amazing to be back here. It was the right event to come to.”

Matt Brown, of Petaluma, Calif., dominated the ribbons in the CCI2*, riding BCF Bellicoso to first place and Super Socks BCF to third place. Maya Black, of Whidbey Island, Wash., and Doesn’t Play Fair, the leaders for the first two days, knocked down one show jump to split Brown’s pair.

This was BCF Bellicoso’s second CCI win in 2013, having won the CCI1* at Rebecca Farm in Montana in July. He also won the award as the top-placing 7-year-old. 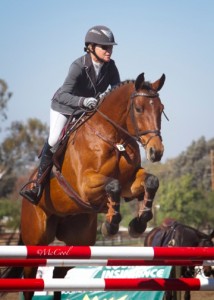 “I’m not sure what finishing first and third means to me.  I’m not used to doing so well, I guess,” said Brown, 37. “I’ve always had young or difficult horses to work with, so my focus in the last 10 years has been on trying to develop those horses. I love the process of bringing horses along, so it’s a different experience to have such top-quality horses as these, with good backgrounds.”

Brown’s world has changed in the last year, with the support of the Blossom Creek Foundation, whose sponsorship has allowed him to find several top-class horses on whom he can advance his international career.

“My focus is on me and those horses right now,” he continued. “And I guess what this weekend means is that it’s time to sit down and figure out the next step, because we have some really serious horses who have proved themselves now. If we’re going to make a go if it, we have to figure out what our next step is.”

Caroline Martin, of Rieglesville, Pa., won the Mia Eriksson Award as the highest-placed junior rider in the CCI2*. She rode Center Stage to fifth place (55.7)

Black, 25, wasn’t disappointed to finish second on Doesn’t Play Fair. “I made a mistake, and we had a rail down,” she said. “I just couldn’t be more pleased with him. I’m really excited for the future with him. I have stuff to work on, but that’s what the winter is for.”

Ruth Bley rode two horses to ribbons in the CCI1*, placing first with Rodrigue du Granit (43.3) and sixth with on Silver Sage (48.3). Bley, 54, also won the trophy as the top-scoring amateur rider in the CCI1*. She owns and manages an electrical-contracting company that installs the electricity for bridges, tunnels and sports facilities, including the San Francisco Bay Bridge.

She bought Rodrigue du Granit in February and made Galway Downs her year-end goal. “He’s just been getting better and better, but I think that the key for me was that we got here three days early, and I could just concentrate on me and my riding. It was nice to get here and just settle in,” said Bley.

Gina Economu, of Sun Valley, Calif., rode Covert to second place (43.7) and won the award for the top-scoring 6-year-old in the division. He just edged Fleur De Lis and Tami Smith, who led through the first two phases but lowered the last fence in show jumping.

“I cannot believe how amazing my horse was this weekend,” said Economu. “The cross-country course was very fair, but it was tough in what it asked, and it encouraged them to jump well.”

Lulu Shamberg, of Santa Monica, Calif., won the award for the top-placed junior rider in the CCI1*. She rode Amarna to fourth place (45.6).

Eventingtrainingonline.com is a Friend sponsor. 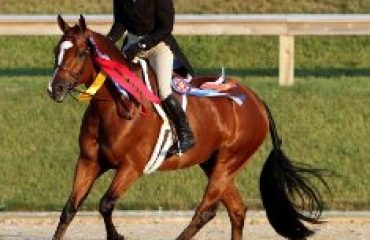 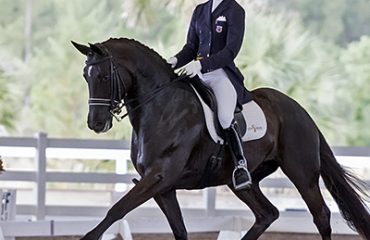 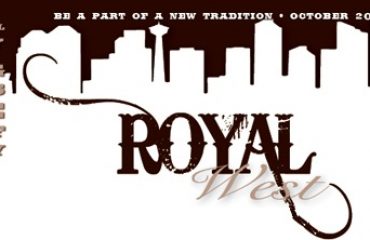