Ladies’ Day was a success once again, as about 300 women paraded their hats around Devon and enjoyed the second annual Ladies’ Day Tea.The day, sponsored by Dressage Collection, began with the hat contest, and participants showed off their creativity as they passed the judges in the Main Grandstand. This year’s judges included Emmy winning television star Carson Kressley, 6abc’s Alicia Vitarelli, NBC10’s Bill Henley, Patrick Champalou from Cartier, Brenda Waites Bolling from Millinery Boutique in New York, Sheila Connolly of SCB Consulting and Beth Beverly from Diamond Tooth Taxidermist. “A lot are return judges who have a background in millinery, fashion or the equestrian world,” said Ladies’ Day Chairman Jen McGowan.

The judges certainly had some difficult decisions to make as the contest entries ranged from hats to fascinators to outfits such as a Great Gatsby themed duo. 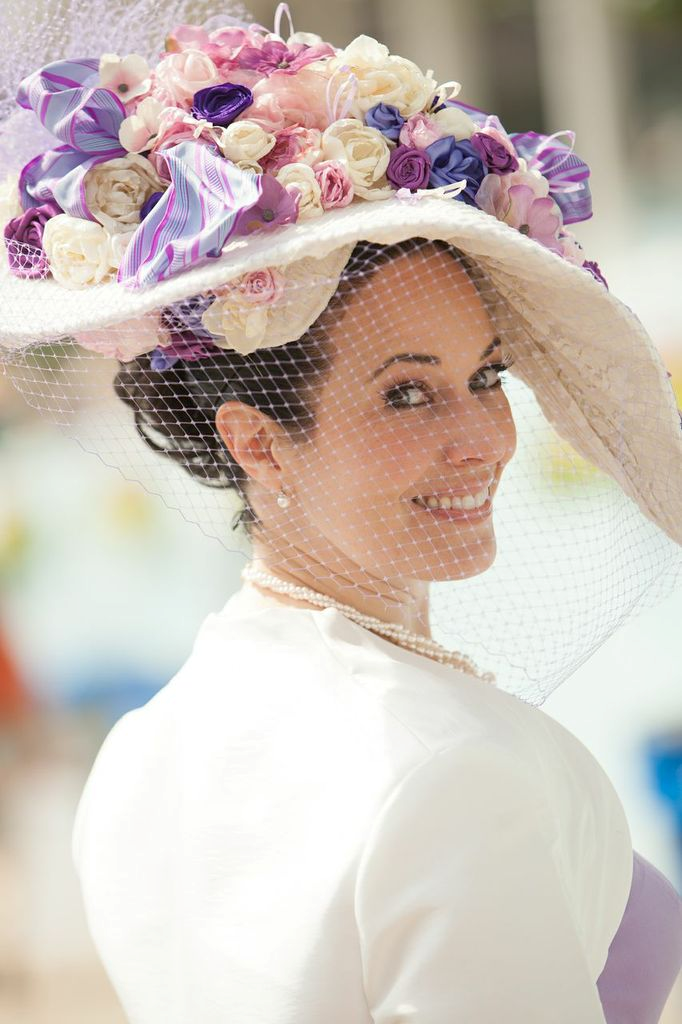 Robin Sweet won “Best of Devon” for her picnic basket hat. Jasen Rhinehart, with a cream colored ensemble, and Emily Galloway, whose fascinator featured butterflies, both won “Most Fascinating.” Amy Holzapfel won “Best Hat to Toe” for her pink dress and pink hat with flowers. The grand prize winner in the “Best in Show” category was Tiffany Arey for her lavender dress and hat with flowers in shades of purple and white. “I love all of the creativity and effort everyone puts into their hats,” said Ladies’ Day Chairman Jeanne Dechiario.

“It’s just a great way to get gals to dress up together in the middle of the day and it’s a great Devon tradition,” said Ladies’ Day Chairman MaryKay Bergan.

In It To Win It

The open hunter divisions continued on Wednesday with many familiar names appearing in the jog order. The first year green hunter stake class was won by Mythical ridden by Kelley Farmer. Second went to Kingpin ridden by Amanda Steege. Another of Farmer’s mounts, Dancing Solo, rounded out the primary color ribbons in third place. Farmer has been making the most of her trip from Lane Change Farm in Kewick Virginia, riding six horses in the open hunter divisions. The first year green hunter champion was Kingpin with Mythical in reserve.

The second year green hunter stake class was won by Queen Latifa with Jamie Taylor in the irons. Queen Latifa picked up ribbons in all four over fences classes, winning each class other than the handy class where she placed third. Second in the stake class went to Fredrick ridden by Maggie Bracco. Third place was awarded to Small Celebration ridden by Taylor Adams. The second year green hunter champion was Queen Latifa with Small Celebration in reserve. 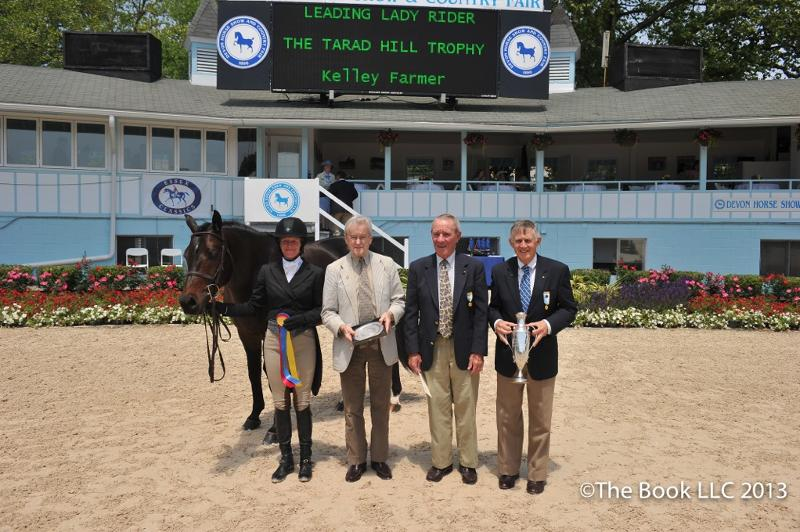 The regular conformation hunter over fences class was won by Showman ridden by Scott Stewart. Showman has made his third trip to Devon his most winning one yet, picking up ribbons in every class in this year’s division. Second went to Taken with Farmer in the irons. Third place was awarded to On Q also ridden by Farmer. The regular conformation hunter champion was Showman. Back Story was reserve in this division as well, coming in reserve overall in both conformation divisions.

The high performance hunter stake class was won by Mythical ridden by Farmer. Second went to Dedication, Stewart’s mount. Third place was awarded to Zidane ridden by Steege. The high performance hunter champion was Dedication. This marks the second year that the handsome bay has been champion at Devon. Mythical was reserve champion in this division, adding a second tricolor ribbon to the reserve champion Mythical earned in the second year green division.

When all the hunter rounds were in the books, Farmer handily emerged as the leading lady rider and overall top rider. Queen Latifa was the high point mare. Back Story was the grand hunter champion, an impressive feat for the first time competing at Devon. Only time will tell if Farmer’s winning ways will continue in Sunday’s hunter derby.

Sidesaddle: A Slice of History

This afternoon, Devon spectators were treated to a special slice of history as the sidesaddle riders entered the Dixon Oval. Sidesaddle riders use a special saddle and equipment that allows the rider to side sideways with both legs on one side of the horse. This type of riding is known as riding “aside.” In comparison, most contemporary riders ride with one leg on either side of the horse, or “astride.” Sidesaddle riding was invented as a necessity back in historical times when women were not permitted to wear pants and horses were a major form of transportation and recreation. Sidesaddles allowed a lady to travel and even foxhunt while still remaining modest and well-attired in a skirt.

Although skirts are no longer compulsory in our modern world, sidesaddles have continued to be a part of the show ring. Sidesaddle riders may compete, aside, in regular dressage, three-day eventing, jumper, and hunter classes against their counterparts who ride astride. Some riders, like Devon Zebrovious, not only compete in a sidesaddle but actually regularly foxhunt aside. Others horses, like Martha King’s Rockstar, compete both aside and astride, depending on the competition.

At Devon, sidesaddle riders have their own division where they are the stars. Like all hunter classes, sidesaddle classes are judged on the manners and performance of the horse. Unlike other classes, turnout is more critical. The rider may be judged on the suitability of her clothing and saddle, which are often actual antique pieces that have been preserved for decades. The judges may even peer inside her sandwich case to ensure she has an appropriate sandwich (no red meat, the scent might confuse the hounds). The type of horse is judged, as the horses in this division should be suitable for a lady to hunt to hounds. In total, not only must these horses perform on the flat and over fences but everything must be historically accurate. 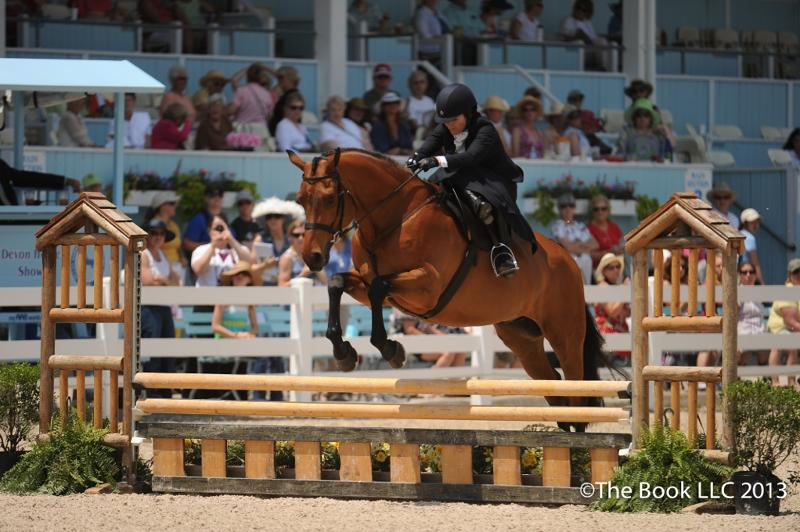 It was an elegant day in the Dixon Oval as the sidesaddle competitors showed off their skills on the flat and over fences. The ladies sidesaddle hack was won by Pricilla Denegre on her long-time partner Garnet. This pair has won the sidesaddle hack several years running and is always a force to be reckoned with at Devon. The ladies sidesaddle over fences was won by Martha King on her horse Rockstar. Of course, since the competitors are ladies it was all “glowing,” no sweating, as they lined up for ribbons under the mid-day sun. 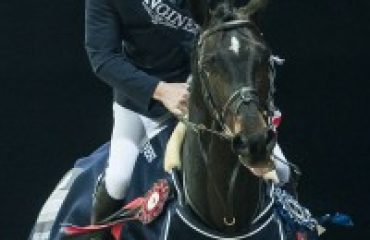 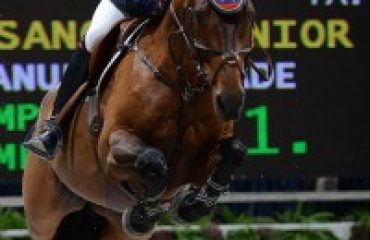 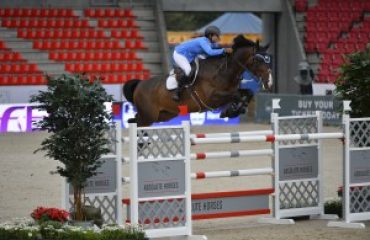