Gladstone, NJ (June 27, 2012) – It was a weekend of fireworks for Wellington-based dressage rider Caroline Roffman and her horse Pie, as the duo dominated the Intermediaire I Division at the 2012 Festival of Champions to ride away with the National Championship. While fireworks on a nearby golf course had Pie a little unsettled one night during the competition, Roffman and Pie set off their own fireworks in the ring to win the championship with a 74.535% total for their three classes. 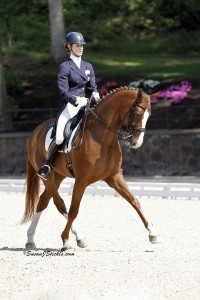 Caroline Roffman and Pie have been named the 2012 United States Intermediaire I National Champions. (Photo courtesy of SusanJStickle.com)

Early in the week Roffman took a commanding lead of the Intermediaire I division, winning both the Prix St. Georges and Intermediaire I classes. Dancing their freestyle to a combination of music from Britney Spears and Katy Perry, Roffman and Pie, on the heels of the fireworks experience, came in third – but their strong lead still helped them take home the victory over David Blake, in second, and Heather Mason in third.

“I bought Pie as a four-year-old, and he was challenging,” said Roffman.  “Some didn’t think he’d ever settle down enough to be a successful dressage horse, but I’m so pleased with his progress this year.”

The freestyle was only Pie’s second, and although Roffman said she was the one lacking during the test, the 10-year old Hanoverian gelding kept his cool to show that he could win a national title. “My working student, Amy Schierbeek, did the music for our freestyle,” Roffman said. “I wasn’t at my best, but thank goodness Pie pulled it together.”

Roffman is no stranger to being in the winner’s circle at Gladstone, as during 2011 she won the Young Adult Brentina Cup Championship aboard Beemer. “It was wonderful to return to Gladstone and win again,” she said. “I really love Pie and we have a great bond. He has been with me for many years and continues to develop and succeed. Last year he also won a Reserve Championship at the USEF National Young Horse Dressage Championships. And now to win the National Championship is almost beyond words.”

Roffman has been on the fast track to dressage success for many years. Two years ago she was named the FEI Rising Star by the International Equestrian Federation – a title she has lived up to in the highly competitive dressage field.

Roffman has partnered with fellow dressage rider Endel Ots to open Lionshare Dressage in Wellington, where they are quickly building a reputable training and sales farm. “I am certainly in my element whether competing, riding or training,” Roffman said. “I am thrilled that Pie is the 2012 US I-1 Champion! From the first second I saw him I was in love and he has been my best friend for years and I am so proud he could show off how special he is. I am so thankful to everyone who helped me throughout the weekend at Gladstone – it was a great weekend!”

Pie’s success at Gladstone came on the heels of a great winter circuit. At the Global Dressage Festival Nations Cup, Roffman and Pie helped Team USA clinch the gold, and Pie and Roffman also swept the Prix St Georges classes at the Nations Cup. 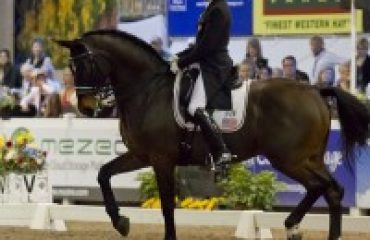 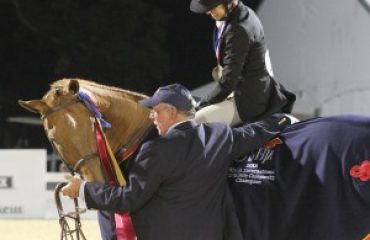 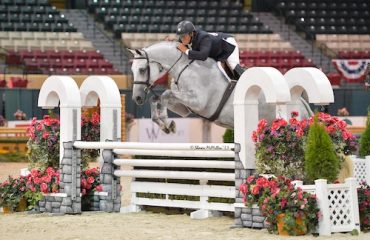