As the first $7,500 Open Jumper class commenced, the sun shone down brightly on the challenging course of towering jumps Tuesday evening set up in the Dixon Oval.

There was a sense of excitement in the large crowd knowing that this would be the first appearance of many of the riders vying for a spot in the Olympics. They were not disappointed with six on the long list competing, including former Olympians McLain Ward and Beezie Madden. Just after Ward finished his round, storm clouds that had been gathering erupted and interrupted the first Open Jumper class of the night. The excitement of the two clean rounds made by Madden and Ward held the audience’s attention well enough to keep them through the rain delay to watch the jump off. 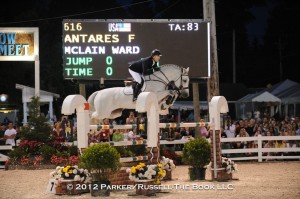 With a winning time of 33.30 seconds, and a meticulously clean, flawless round, Michael Walton riding Wodca, owned by Mia Marano of Eagleville, PA, stole the spotlight and left the audience in awe. Walton was one of two with a completely clean jump-off round. Jessica Springsteen came close to his time, but she unfortunately took a fall on the third to last jump eliminating her from the jump off.

The rain continued to fall through the Single Horse Driving Classes, with a cancellation of the Coaching classes, the second $7,500 Open Jumper Class carried on with much cooler temps. 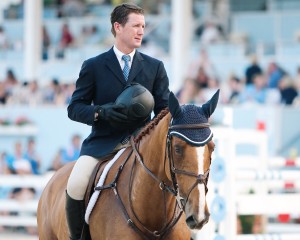 The riders proved to be as relentless as the rain itself.  With a new exhilarating course presenting the same level of difficulty as the first $7,500 Open Jumper Class, the riders gave it their all as they raced to beat the clock while keeping all rails up resulting in a clean round to advance them on to the jump off.  This time, three former Olympian’s were in mix; Beezie Madden, Laura Kraut and McLain Ward.  Only two riders made clean rounds while staying inside the allowed time of 77 seconds.  In the end, McLain Ward riding Apple of Sagamore Stables in Brewster, NY was named the winner of the $7,500 Open Jumper Class with a time of 69.78 seconds and zero faults. 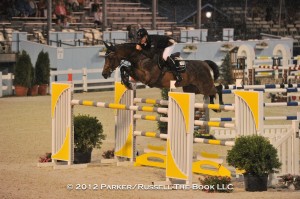 A Conversation with Course Designer Michel Vaillancourt
By Nichole Osborne

Monday evening, while watching the AA Jumper Classic, I had the opportunity to talk to the man behind the course, Michel Vaillancourt. This is his first time designing at Devon and he praised the footing, the quality of the riding, and most importantly, the crowd.

“The crowd at Devon is truly spectacular, in regards to the knowledge of all things equine present, but also the fact that it is right against the ring, right there cheering on and engaging the horses and riders. Devon encourages riders to bring their game up, not only because it is the show of Champions, but also because of the presence of the public. These things are what will keep alive, and also further the sport; engaging the public and making their experience special brings people to cheer alongside the rings but also to aspire to one day ride in those rings themselves.” 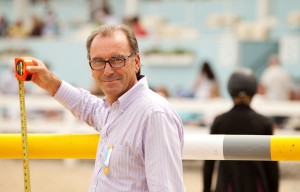 Mr. Vaillancourt feels that Devon is not generic, in comparison to other shows, that the environment sells the sport to the spectator and makes it exciting. Simply put, Devon is not merely a horse show, but an event. Looking back towards what happens in the ring, he expressed the idea that the style his courses bring to the ring does not change depending on the show grounds, but he has had to ask riders and horses to bring their game to Devon, and to challenge themselves. With a simple gesture he reminded me of why we are all here, the sign at the end of the ring: “DEVON HORSE SHOW – WHERE CHAMPIONS MEET.”

This year is particularly special, for the sport, but also for Devon. As host to one of the US Show jumping Events for the London Olympics can be proud. The weight of this event will be the reason behind his courses for those classes, and they can be expected to test some of the best horse-rider combinations the U.S. can produce for the Selection committee. Mr. Vaillancourt is not striving to make those courses impossible, but instead to sift out those who might be stragglers and to bring out the best in the top riders. He reminds us though that this event is also a building block towards the Olympics for the combinations that will be going to London; not only must he provide a course that will make selection possible, but one that will prepare those about to cross the pond.

The years he spent as a rider and coach himself, his experience, display the value that learned and talented course designers possess, they build their tests and the questions using an arsenal developed via personal experience. Mr. Vaillancourt came into the art of course designing by chance, a ring-side proposal that he design for that show the next year, which led to other events and courses, but it is his experience and wisdom that bring him to Devon.

The Elegant Ladies’ Side Saddle
By Nichole Osborne 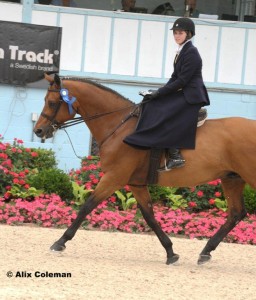 It was a rather idyllic afternoon for the first of the Ladies Side Saddle classes, and a wonderful evening for the conclusion of the division. Priscilla Denegre and her horse Garnet won the Ladies Hunter Side Saddle Hunter Hack, for the fifth consecutive year. Bellisima, Marth Papariello, claimed second and Bold Liberty, Ashleigh Ramey, third. The Ladies Side Saddle Hunter over Fences followed the Hunter hack. Rockstar, owned by Martha King and ridden by Gillian King, who took fourth in the Hunter hack, won the Hunter over fences class and Garnet, the reigning winner for two years, took second. Bold Liberty finished in third. After all of the jumpers, The Side Saddle Hunter Under Saddle horses came back into the ring. Garnet won the hack, Bold Liberty took second and Rockstar finished third. All of the Side Saddle classes culminate in the Championship and the Holly H. Griffin – Hub International & Great American Insurance Co. Ward and the Blue Challenge trophy, which Garnet won for the fifth consecutive year. Rockstar finished as Reserve Champion. 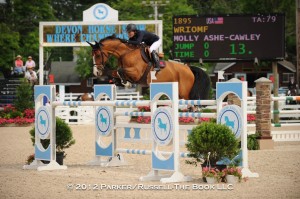 Following the high stepping Saddlebreds, Hackneys and Friesians, the jumps went back in the ring and the Seven and Eight Year Old Young Jumpers arrived. Wotsamillion and Jessica Springsteen own the Seven-Year-Old class with Andretti, ridden by Schuyler Riley, behind them for second. In the Eight-Year-Old class Chica’s Girl and Schuyler Riley trumped the field, Zamira, ridden by Candice King, finished second. As the afternoon sun faded to an evening glow the jumps went up and the $32,000 Open Jumper class began. Against a jump-off field of five competitors, Molly Ashe-Crawley guided Wriomf to victory and Michael Walton rode Wodca to second. Mark Q, ridden by Kevin Babington, took third. Candace King aboard Dana and Luis Fernando Larrazabel on G & C Flash followed in fourth and fifth respectively. The jumping concluded with the $10,000 Open Jumper Hit and Hurry, each rider given 55 seconds to complete as many jumps on a set course as possible. Laura Chapot snagged the victory with Bradberry for the third consecutive year, as well as a second place finish on her other mount, Quointreau un Prince. Donald Cheska rode Imprimis to third and Luis Fernando Larrazaba finished in fourth aboard G & C Leroy. Katie Dinan and McLain Ward rounded up the victory gallop with finishes in fourth and fifth, respectively, aboard Couletto K. James and Apple. 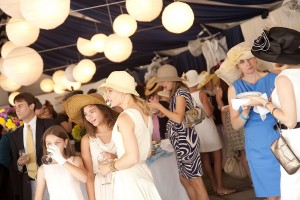 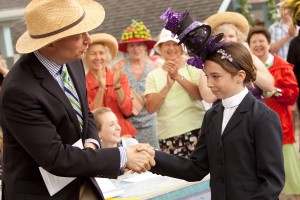 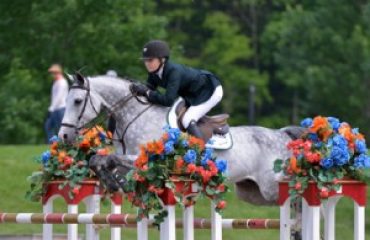 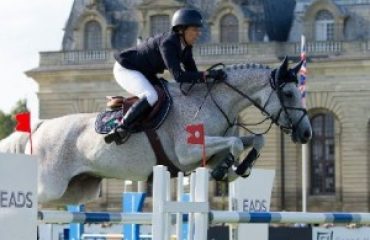