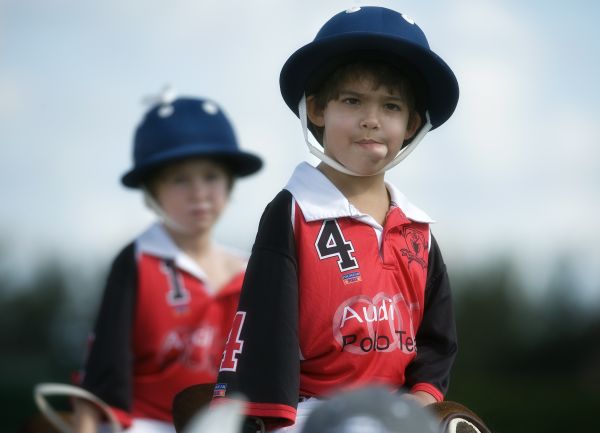 WELLINGTON, FL—Nov. 25, 2013—-The future of polo is in good hands if Sunday’s Turkey Trot Juniors Tournament at Grand Champions Polo Club is any indication.

The eight-year-old club held its final juniors tournament of the 2013 season for players of all ages and skill level. 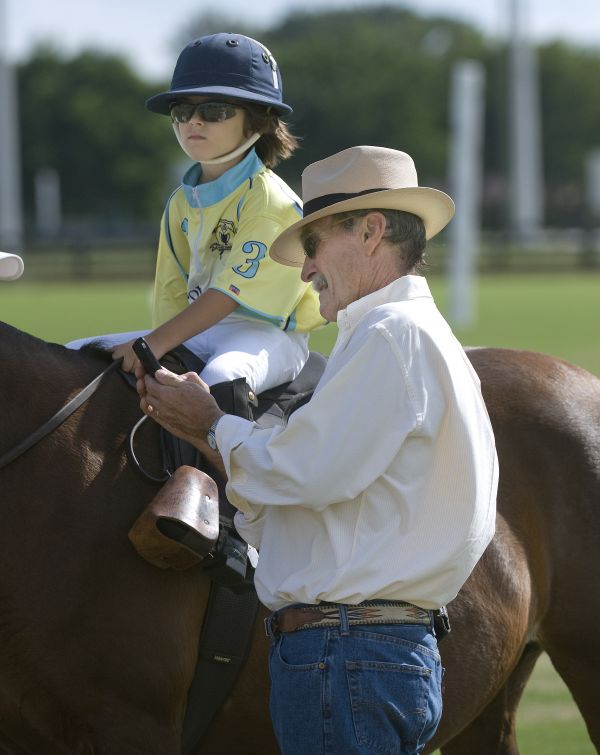 Three chukkers of play pitting three teams were held in the Turkey Run Round-Robin on a regulation-size field. 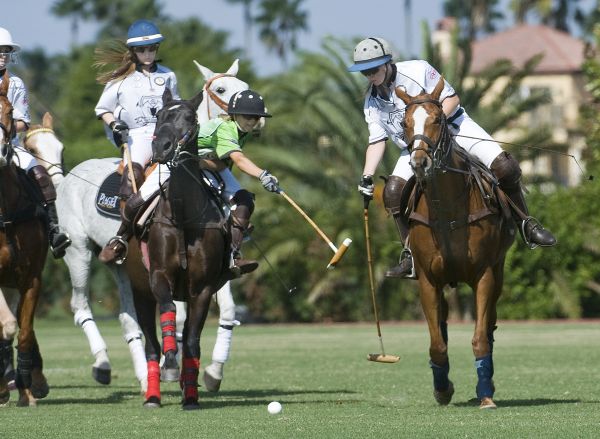 Grand Champions defeated Polo School Blue, 3-1, in the opening chukker behind two goals by Kelly and one by Schwartz. 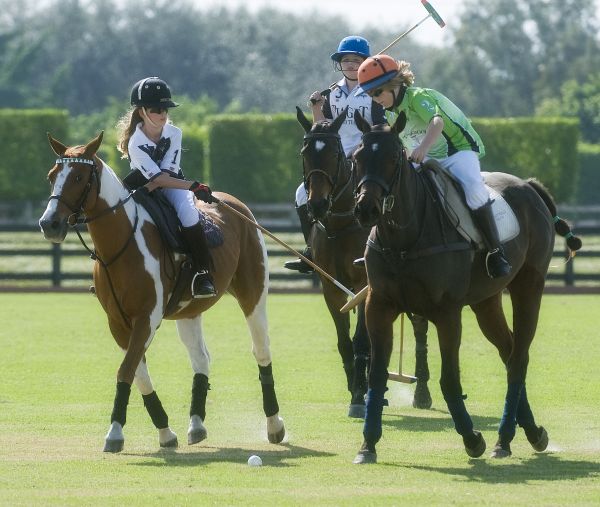 Elizabeth Fenner of Piaget (1) attempts to hook Joseph Schwartz (2) of Audi as he hits the ball. Photo by Scott Fisher

In the second chukker, Grand Champions and Polo School Green tied, 1-1, with Olivera and Schwartz each scoring a goal.

“I have been playing polo for about four years and riding since I was 3,” said Kelly, who travelled with her family from Vero Beach and coach Max Secunda, who introduced her to polo. “I love this sport with the big horses. I love the adrenaline and just getting to play. 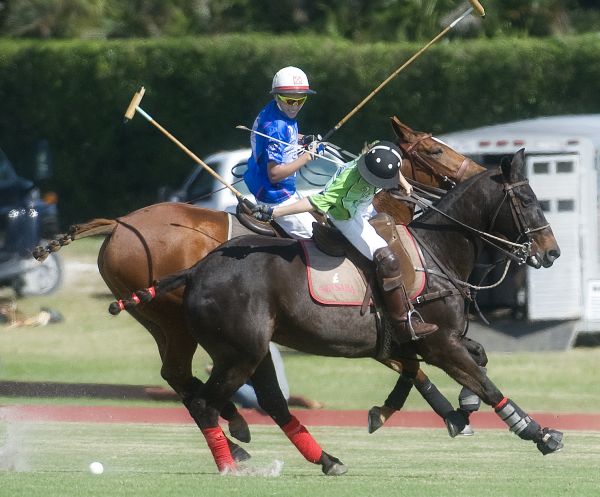 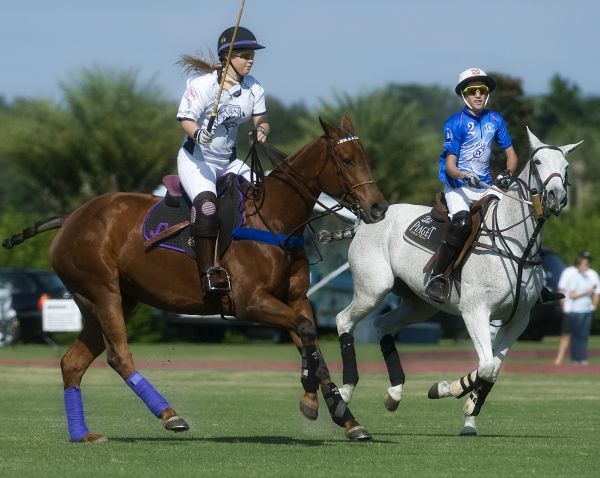 “The game was great today, being on the girls team and feeling the girl power,” Kelly said. “I wanted to play more. I want to play in every one of these tournaments as much as I can with kids my age. I was shocked it went by so fast. I love girls playing polo. I want to see more of them play in the U.S. Open.” 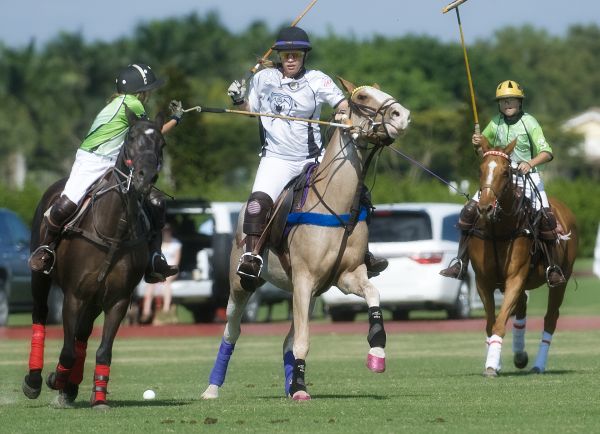 “I like the sensation when you hit the ball,” said Olivera, a sixth grader. “I’ve been riding horses since I was little. I like playing polo with my friends. Today’s game was great because both teams were balanced and very equal. It was competitive and fun. I want to play in more tournaments.”

Two more chukkers of play on a shorter field was held during the Turkey More Than Trot three-on-three event. The teams were: 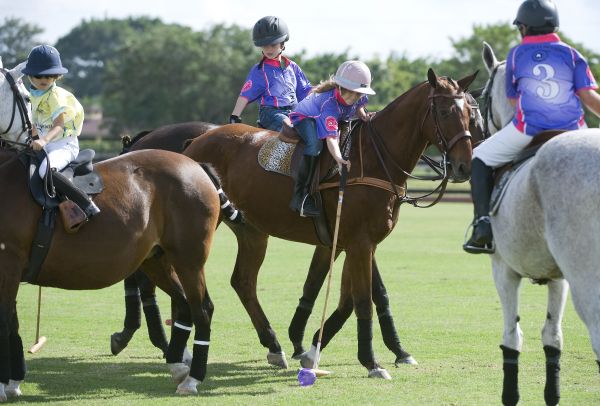 All eyes on the ball during the Walk Alone event. Photo by Scott Fisher

The Walk Alone event featured two teams. They were: 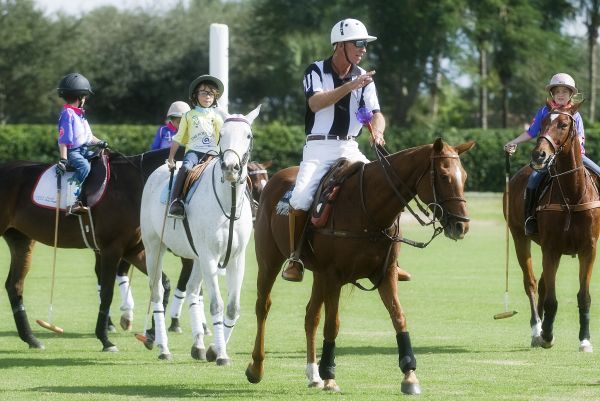 Umpire Scott Campbell leads Lorenzo Ramirez of Polo School Yellow and other Walk Alone participants out onto the field. Photo by Scott Fisher

The final event of the day was the Pro Leadline with Lion and Sebastian Mandelbaum walking with their father and player Leo Mandelbaum; Luke Hall, Emmett Tamplin, Janie Barnett and Weston Mead.

“This is where it all starts,” said entertaining announcer Dale Schwetz, a full-time USPA umpire and polo player. 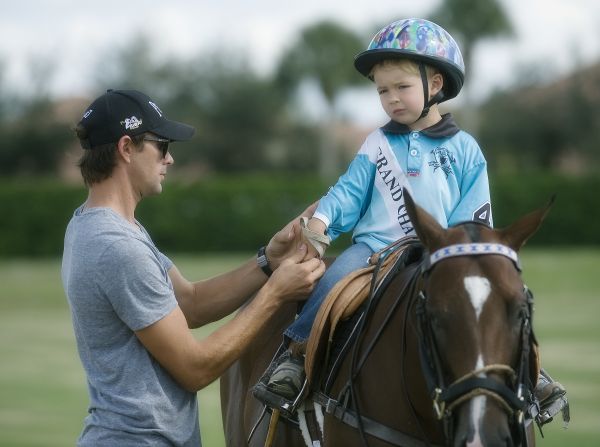 Professional polo player Jeff Hall helping son Luke with his mallet strap before the start of the Pro Leadline. Photo by Scott Fisher 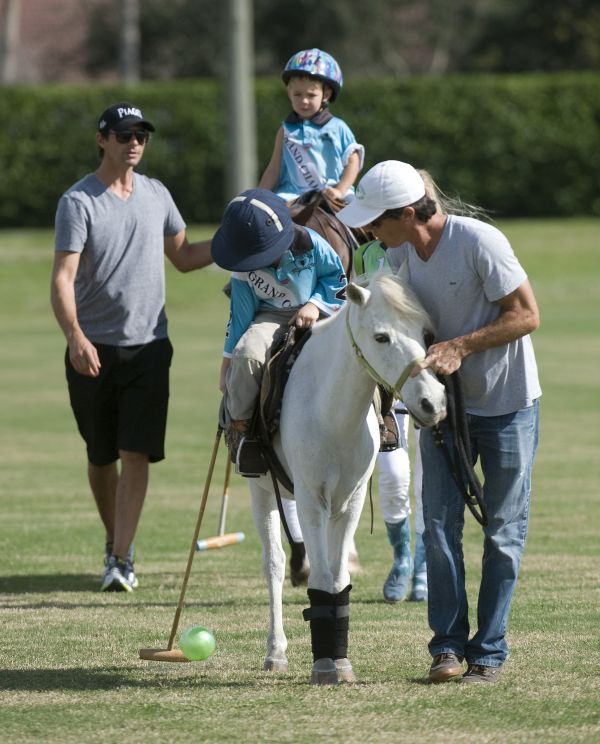 Luke Hall, 3, with his dad, professional polo player Jeff Hall, participating in the Pro Leadline in his debut. Photo by Scott Fisher

Said Hall about his very relaxed son, “He is comatose right now, I think he’s ready for a nap.”

The junior tournaments are not only attracting sons and daughters of polo players but beginning to see more boys and girls coming out for the sport with no history of polo in their family.

Nine-year-old Bryce Gardiner of Wellington has been playing polo for two years. His mother, Shauna Gardiner, is thrilled watching her son play.

“The memories I am building with my son through this sport is everything, it’s been an amazing bonding thing,” Shauna Gardiner said. “I really appreciate what Melissa is trying to do, she is truly amazing for what she does. I always wanted to tell her how much I appreciate it. 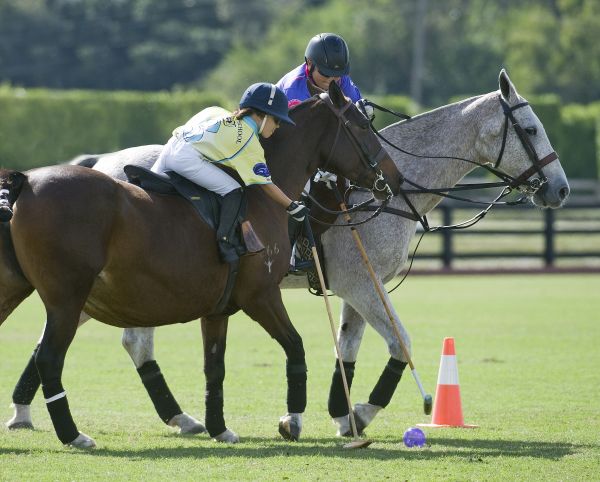 “It started with lessons and it’s been wonderful watching him progress. It’s nice for my husband and I to have this outlet,” Gardiner said. “We have friends who are polo people and they are always talking about how great it is. It’s hard when you don’t know about polo. Grand Champions has been so helpful.”

Tournament director Robin Sanchez would like to see the consistency of monthly junior tournaments continue. The PTF is hosting the next juniors event in late December.

“These kids are at a level that they are starting to learn how the game works. The game-type situation helps so much in their progression and plus they get to be with their friends, have a good time and spend an afternoon outside in the fresh air doing good stuff.

“It’s great to see a new generation and it’s great to see kids having a good time,” Sanchez said. “It’s such a good family-thing. To see Julian, Max and Finn, three generations right there is phenomenal. And then kids whose parents didn’t play polo coming out here and enjoying a whole new sport is really nice to see, too.”

Grand Champions provided Miami-based food truck CheGrill serving Argentine food and refreshments for players, coaches, parents and spectators throughout the afternoon. As an added treat, gymnasts from Epic Gymnastics of Palm Beach performed for the crowd after the polo competition and before the awards presentation. 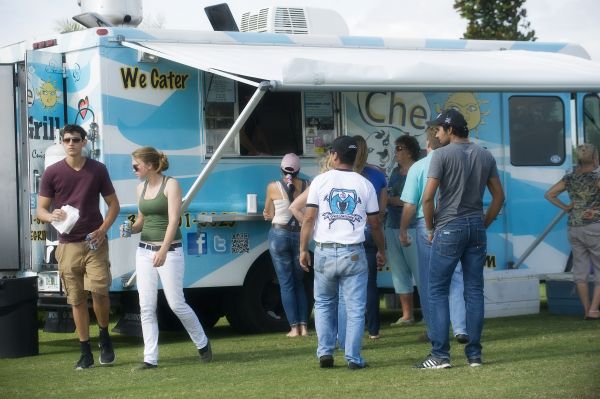 Miami-based popular food truck Che Grill is a familiar and welcome sight at Grand Champions. Argentine food and refreshments for everyone is provided by the club. Photo by Scott Fisher

The Turkey Trot Juniors Tournament came just one month after the successful debut of the ProKidz Tournament, an inaugural event created and hosted by Grand Champions Polo Club where a pro played alongside three players on each team. 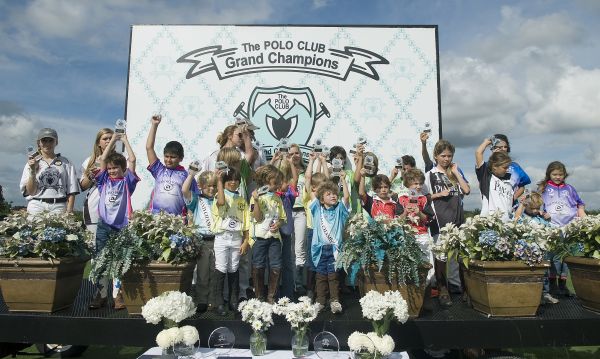 Participants in the Turkey Trot Juniors Polo Tournament showing off their trophies. Photo by Scott Fisher

Grand Champions Polo Club owners and players Marc and Melissa Ganzi along with the PTF have been instrumental in the growth of junior and youth polo and will resume hosting more junior events in 2014 at Grand Champions.

Melissa Ganzi was thrilled to see so many new faces out on Sunday. 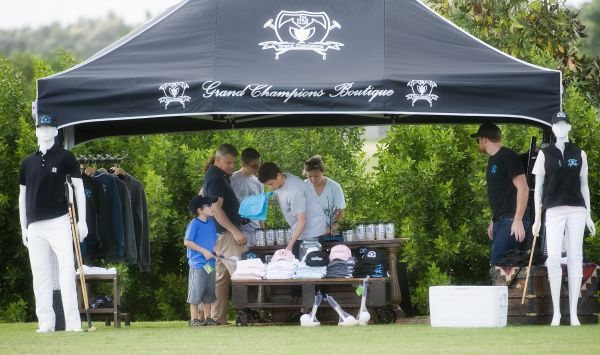 Parents and kids shopping at the Grand Champions Boutique. Photo by Scott Fisher

Ganzi, secretary-treasurer of the PTF, is a selfless supporter of the PTF which is orchestrating the growth and success of the juniors and youth programs across the nation.

“Tournaments like this are important for the growth of polo,” Ganzi said. “You can’t just focus on one thing and expect it to grow. It’s important for these kids to have opportunities and Grand Champions is committed to doing it. It is a year-round commitment that we have.” 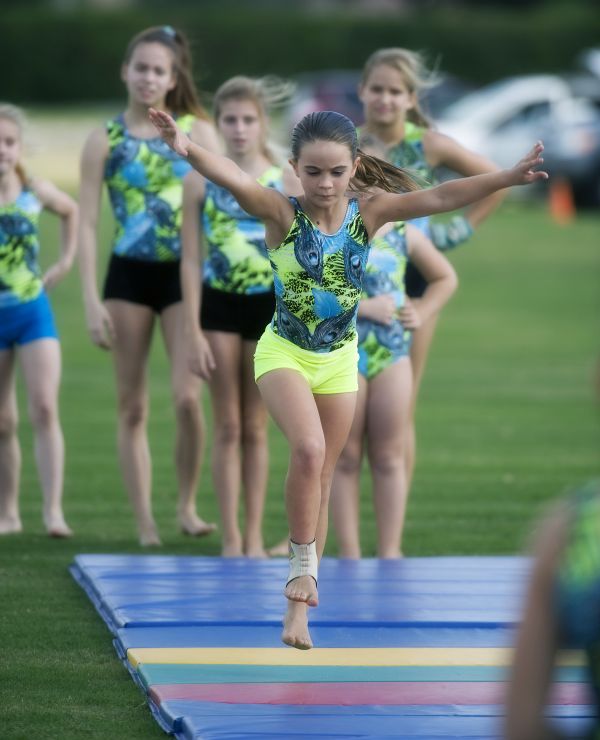 Gymnasts from Epic Gymnastics of Palm Beach perform for the crowd. Photo by Scott Fisher 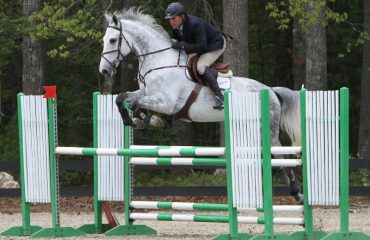 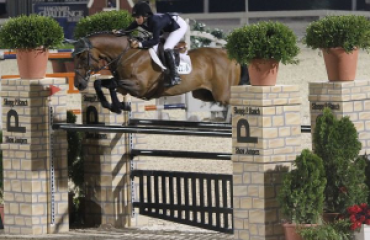