Lexington, KY – Rain fell for most of Sunday morning at the Kentucky Classic CDE, it fell so hard that Competition would eventually be stopped, but not before two individual drivers hit career milestones. Leslie Berndl earned her first USEF National Single Horse Driving Championship, and Chester Weber made it an official decade of dominance with his impressive and unprecedented tenth USEF National Four-in-Hand Driving Championship. 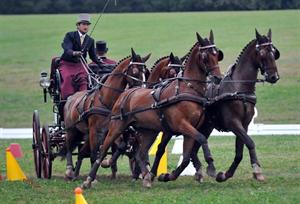 Weber (Ocala, Florida) held a sixteen penalty lead heading into Sunday’s cones phase. By guiding he and Jane Clark’s team of Dutch Warmbloods deftly through the obstacles he emerged from the ring with 9.06 penalties, and his tenth USEF Four-in-Hand National Championship. For Weber it’s another feather in the cap of an already very successful season. With his success in Europe over the summer, a 2014 WEG test event win at CAI-Caen, a win at CAIO Saumur, and top three finishes at Beekbergen and Aachen, this landmark national championship makes Weber’s 2013 campaign one of the best in recent memory.

Weber finished on a total score of 141.20. Finishing second was Jimmy Fairclough (Newtown, New Jersey) on a score of 173.95. 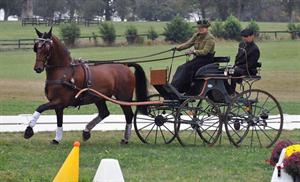 Leslie Berndl also held a double digit lead entering the cones. She and Uminco held onto that advantage and emerged from the rain as USEF National Single Horse Driving Champions. Berndl (Newcastle, California) earned an 11.00, good for third place in the phase, and finished with a 141.53 total score. She was second in the dressage phase, second on the marathon, and the most consistently good single horse competitor over the entire weekend. This is Leslie Berndl’s first National Championship. Umnico was driven to a National Single Horse Championship in 2009, also at the Kentucky Classic CDE, by his owner Fritz Grupe.

Finishing first in the cones phases were Donna Crookston (Saltsburg, Pennsylvania) and Cowboy’s Black Cadillac. They scored a 3.00 and moved up from third place after the marathon to second place in the end with a final score of 155.29. Second on the cones and third overall were Sara Schmitt (Flemington, New Jersey) and Savannah. Their final score was 160.80 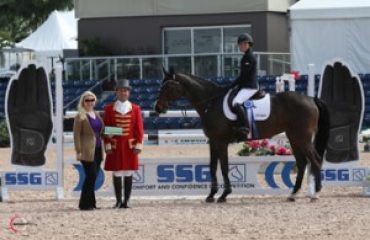 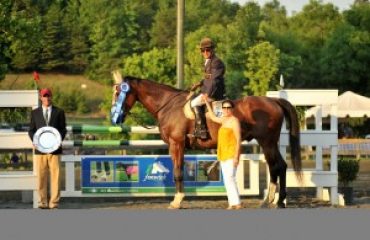 Tryon Summer Classic Just Under a Week Away