Lexington, KY-July 19, 2014-The 2014 Adequan FEI NAJYRC Show Jumping Championship, presented by the United States Hunter Jumper Association, w
elcomed 65 athletes ages 14 to 21 from Canada, the Dominican Republic, Mexico and the United States to the Kentucky Horse Park for four days of team and individual competition.
After an individual warm-up on Thursday, Friday’s competition focused on teams with a Nation’s Cup-style format. A combined team from Zones 1 and 9 took the gold in the Junior division, beating out Zone 5 by one fault. Zone 3 dominated to take gold in the Young Rider division. Zone 5 and Mexico took silver and bronze, respectively, in the Junior division while Zone 4 took silver and Zone 2 took bronze in the Young Rider division.
The day’s courses, designed by Olympic course designer Steve Stephens, proved difficult for both divisions, especially the Young Riders. The Junior division saw several clear trips in both the first and second rounds by Adrien Vilcini (Zone 10), Lucas Porter (Zone 7), Sara Nordstrom (Zone 9) and individual leader Lucy Deslauriers (Zone 2). 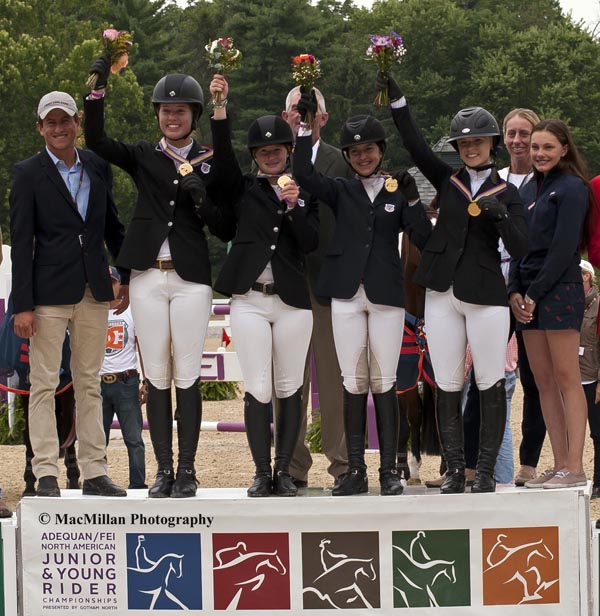 “The course was challenging, but not unfair,” said Sara Nordstrom, one of four to go faultless in both rounds of the Junior division. “I owe it all to my horse, he jumped beautifully. But I didn’t feel good until after the very last jump in both rounds!”
The Young Rider division rode a slightly different course that many had trouble navigating, except Michael Hughes (Zone 2). Hughes is the only Young Rider to move on to Sunday’s individual round with the least amount faults from Friday’s team competition. Hughes’ ride helped his team to win the bronze with a team total of 46 faults.
Zone 4 earned the silver medal with 35 faults, but it was the ladies of Zone 3 that were unstoppable earning the gold medal by ending on a score of 14 faults.
“Our Chef, Sandra [Ruiz] has a lot of energy and is very inspirational, so giving this back to her means a lot,” said Chloe Reid of Zone 3. Reid noted that Ruiz pointed out after their win that it was the first time that Zone 3 has won a team medal at NAJYRC.
But not all of the Zone 3 riders thought they would be on the podium today. KC Van Aarem of Maryland said she purchased her horse off of an Internet ad with the intention of competing in the Maclay. 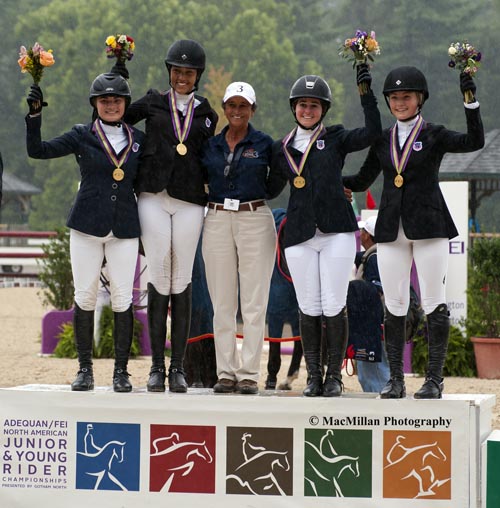 “It’s been a great experience, but I wasn’t expecting to be here today,” said Van Aarem of her horse Mastermind, a 12-year-old Canadian Sport Horse gelding. “I bought [Mastermind] to be a 3′ hunter!”
The individual competition will continue on Sunday, July 20 with Lucy Deslauries leading the Junior division with zero faults and Michael Hughes leading the Young Rider division with .23 faults from their three rounds of competition. USEF Network will be live streaming the events through out the day.
USHJA is proud to be the presenting sponsor of Show Jumping for the Adequan FEI North American Junior and Young Rider Championships, presented by Gotham Northand recognizes the importance this program plays in the development of our sport’s future top athletes.
For complete results please visit www.youngriders.org
Tagged under: 2014 Adequan FEI NAJYRC Show Jumping Championship, Competition, Horses, Jumping, Riding, Show Jumping, Show World, Sidelines Blog, Sidelines Magazine, United States Hunter Jumper Association 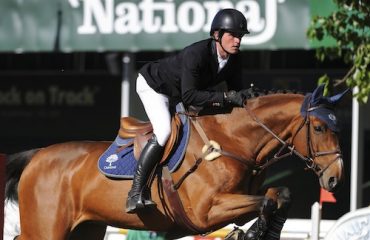 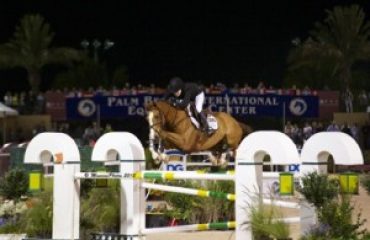