BURBANK, CA – Young dressage horses were the stars of the weekend in the historic and pastoral setting of the Flintridge Riding Club for Dressage at Flintridge CDI*/Y/J, May 26 – 29, 2011 in La Cañada-Flintridge, CA.  As host of the Markel/USEF Young Horse Western Selection Trial for the FEI/WBFSH World Breeding Championships in Verden (GER) and the final Pan American Games qualifying competition for Southern California, competitors made the most of the opportunity to try to earn scores worthy of securing an invitation to represent their country on an international stage. 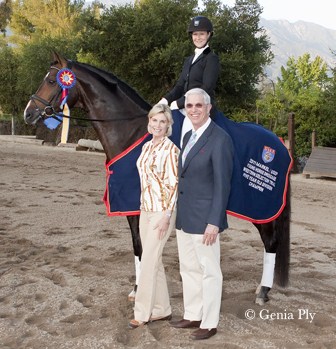 In the Five-Year-Old division of the Markel/USEF Young Horse Western Selection Trial, the standout performer was “Sanceo”, a brown Hanoverian stallion (San Remo x Rivera by Ramiro’s Son II, bred in Germany by Gerhard Dustmann) ridden by Sabine Schut-Kery of Thousand Oaks, CA for owner Alice Womble-Heitman of Hempstead, TX.  Winner of last fall’s California Dressage Society (CDS) Young Horse Futurity as a four year old, “Sanceo” impressed the judges to earn 8.12 in the Preliminary Test (40%) and 8.30 in the Final Test (60%)for an overall score of 8.23, the championship ribbon, and a possible ticket to Verden.  “This stallion is such an elegant and light type of horse,” noted judge Natalie Lamping (4* USA).  “He’s just what we’re looking for in this division.”  Reserve Champion was the U.S.-bred bay Dutch Warmblood mare “Bakara” (Sir Sinclair x Thea by Idocus).  Ridden by 2007 Verden competitor Willy Arts of DG Bar Ranch, “Bakara” earned scores of 7.38 and 7.60 for an overall 7.51 for owner and breeder Janice Kissel of San Luis Obispo, CA.

Despite the quality of rides in the CDI* classes, there was no match for Jan Ebeling and the striking black mare “Rosenzauber 8”.  Having just returned to the U.S. from an FEI World Cup Finals appearance, Ebeling rode Deborah Harlan’s ten-year-old Hanoverian (Rotspon x Shining Sun by Shogun) to a sweep of the division with strong scores of 70.263% in the Prix St. Georges, 70.702% in the Intermediaire I, and 70.292% in the Freestyle.  “My favorite things about this mare are her lightness and how good in the contact she is,” said judge Lamping.  “She’s so pleasant to watch.”

Canadians shared reserve placings in the small tour throughout the weekend, as Dominique Culham Buckland of British Columbia rode “Utango DG” to place second in the Prix St. Georges Test (66.579%) while compatriot Lindsay Seidel-Wassenaar and “Oslo” were runners-up in both the Intermediaire I Test and the Freestyle (66.754% and 66.833%, respectively). 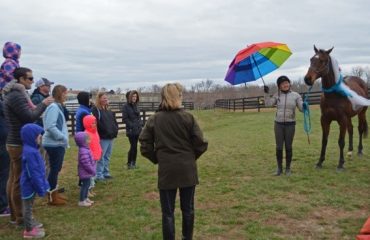 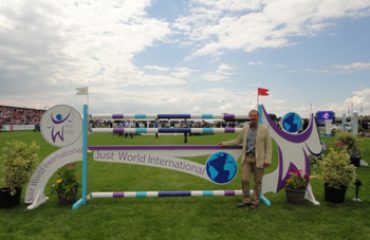