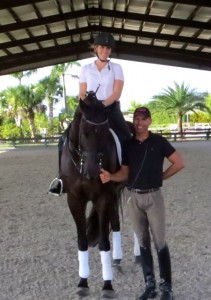 Heidi Degele and Lakota were selected to ride in the Steffen Peters clinic at the Palm Beach Equine Sports Complex, organized by Ilse Schwarz and hosted by Amy Swerdlin. (Photo courtesy of Heidi Degele)

Wellington, FL (December 11, 2012) – USDF Gold medalist Heidi Degele was honored to be invited to participate in Steffen Peters’ most recent clinic held at the Palm Beach Equine Sports Complex, organized by Ilse Schwarz and hosted by Amy Swerdlin.  Degele was one of only a few riders selected for this limited-space opportunity, and she was excited to have the chance to work with Peters on her goal of developing the 7-year-old American Warmblood, Lakota, to Prix St. Georges.

“Lakota is extremely playful and talented,” describes Degele. “He loves to show off his piaffe, especially when I don’t want it.  He’s like a big kid!”

Peters acknowledged this endearing personality trait of Lakota’s during the clinic when he rode the horse himself.  This understanding helped Degele work the horse better throughout the clinic to both of their advantage.  “I really enjoyed the intense two days, and so did Lakota,” she continues. “We worked on everything including quality of trot, trot half-passes, perfectly straight flying changes, and canter half-passes and pirouettes.”  Degele also explains that Peters emphasized to keep things simple, and he instructed her to make the ride easy and simple by doing less.  “He asked me to give the horse an aid, and then have the horse listen to that aid for at least 10 meters before giving another aid,” she describes. Degele felt that Peters really wants to put enough finesse and detail into the sport, so that the rider’s aids become minimal.  “It’s about a more effective leg aid, said Degele.  “Steffen also wanted a very steady contact, and again a focus was put on ‘less is more’ when it came to aids.”

During the clinic, Degele told Peters that her goal was to do the developing PSG with Lakota this year and qualify for the final in Chicago.  Degele had qualified for and been invited to the 2012 Developing Horse Grand Prix Finals with Shantal Rox, an 8-year-old Sandro Hit mare.  She is excited to continue to work with Lakota throughout the upcoming season, along with the other horses and clients she has in training.  Lakota is a 17.1 beautiful black gelding, bred by Mary Sue Jacobs and owned by Mesa Farms.  Degele also hopes to qualify Don Fredo, an Oldenburg gelding owned by Jessica Beier, MD, for the 6-Year-Old Championships in 2013.

Currently, Degele has several adult amateur client horses in for the season, including one client, Cara Broderick, who flies her horse, Duval, from England to be shown and then returns back home for the summer.  She has two client horses staying at Lars Peterson’s barn for the season, who Degele herself trains with on a consistent basis in Florida.  In addition to working with Peters, she also attends clinics with Hubertus Schmidt whenever he comes into town. Degele trained with Schmidt for 3 years in Germany (2004-2007) with her stallion, Ramiros.  She also bought another M level horse while there named ‘Everybody’s Darling.’ She finished training her to Grand Prix with Schmidt, and brought her to USA to win a her USDF Gold medal.

For more information about Degele, visit her website at www.heididressage.com 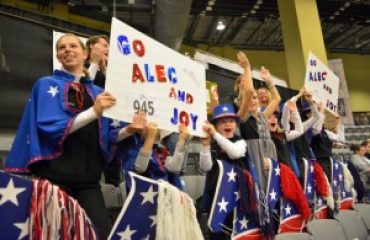 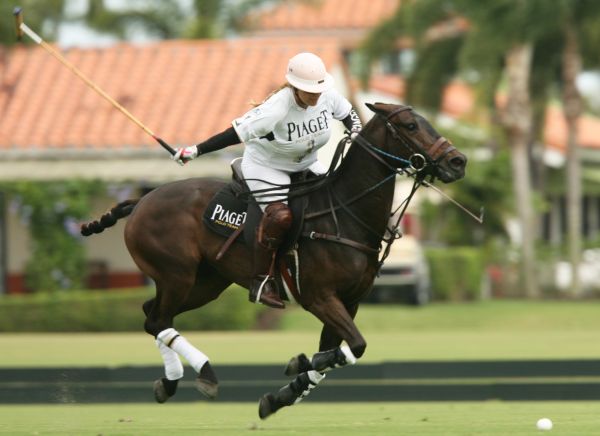