How do you escape a bad marriage and a bad accident? On the back of a horse, of course.

My marriage had fallen apart. A horse I was training flipped over and narrowly missed falling on me. I’d suddenly lost my desire to be with people and horses.

Thumbing through a magazine, I came across a photo of a horse and rider jumping a stone wall in front of a stately castle. It tugged on my heartstrings. My passion had been riding jumpers and I’d always had a fascination with castles. I wanted to be in that picture.

As it turned out, I could be. The photo was an ad for an equestrian vacation in remote Scotland, ideal for my “I want to be alone” mood. I expected I’d ride a little, be by myself mostly and wander among the castles like a recluse. Instead, I met horses and a guide who’d nurture my confidence, and the most interesting people who’d become lifelong friends.

Day 1
An Irish man, the owner of a racing stable and slated for the ride as well, joined me on the two-hour drive to our hotel north of Glasgow. Along the way, we stopped at the famed Loch Lomond, a huge, pristine lake with boundaries extending to the horizon. We drove through the “Rest and Be Thankful” mountain pass and already I was beginning to feel that way. Along the shores of a sea loch, I saw puffs of smoke from a train that skirted the opposite shore. Was this a Harry Potter movie?

Before dinner, I strolled through the sweet, peaceful village where, in truth, a tour of the local jail was one of the main attractions. The town sat on the shore of Loch Fyne with silver waters against peaked hills, entreating one’s mind to become still. The hotel spa helped that as well.

At dinner, I met the rest of the riders and found my preconceived notions way off base. I expected to spend my vacation with inexperience riders and children. Instead, my comrades were seasoned riders of my age: the former photographer to Prince Charles, an environmentalist who was based in Eastern Europe with a major oil company, a Scottish innkeeper and a Scottish banker.

Our equestrian tour guide was a stately woman who’d led these riding vacations for more than 15 years. She queried about our riding experience and tallied our height and weight in order to assign us a horse. From the glint in her eye and her mischievous smile, I had a feeling this could be the ride of a lifetime.

Cathy (second on right) and her fellow travelers gallop along the shore of Loch Fyne, longest of the sea lochs, the name meaning loch or lake of wine or vine and known for its oyster fisheries

Day 2
In the pleasantly cool, crisp air, with calm prevailing and the distant sound of a bagpiper, I felt like I was in a storybook tale. Our horses were pastured behind the Inveraray Castle. Mine was a stocky mare with a white face about 15 hands with common conformation. Her feet were much larger than the Warmblood show horses I knew well.

We started off with a long trot on a logging road to a forest path in Glen Shiram, traversing under low-hanging branches and around trees set close together. I was annoyed. For the price of this equestrian vacation, the least they could do is clear the path. Afterward, the guide confessed that the purpose of the trail was to confirm our riding ability as sometimes people portrayed themselves as more experienced than they were.

As we emerged with no eyes blackened by swinging branches or limbs twisted by unforgiving trees, and our seats firmly in our saddles, we passed her test.

We crossed a stream, had a good canter across a field and ascended up the side of a mountain. Near the top, the trail steepened and our guide suggested we sing to encourage the horses. I think the singing was also to encourage the riders to breathe, as this was the steepest trail I’d ever ridden — and I’m afraid of heights.

She commanded us to canter the last leg of the trail. The horses shot forward and handily reached the top.

A stunning view of the village, Loch Fyne and the castle greeted us, and along with deep breaths, helped to allay my fear. On the summit, we visited Dun na Cuaich, a famous watch tower built to alert the village of invaders coming into the loch from the sea.

That evening we dined in the castle’s tea room and visited Loch Fyne Whiskey to sample the drink. Not accustomed to hard alcohol, the potency squashed all of my remaining nervousness.

From my room, I could see the tower perched on the mountain. We had really climbed high, and over challenging terrain. I was thankful for my horse’s big feet. She was as surefooted scaling that mountain as she was walking along the road. How I’d always fretted for my show horses about the evenness of the ground, and encased their legs in protective boots and wraps! Perhaps horses are tougher than I credited them to be.

Taking a break on the beach of Loch Fyne, from left to right, are Cathy, Britain Lesley, chosen that year as England’s Royal Photographer of the Year, and David, one of the guides

Day 3
In the morning, we spotted salmon leaping up the fish ladders in the River Aray. We then entered ancient woods where our noses filled with the heady aroma of crisp pine air. The environmentalist pointed to the abundance of lichen on the trees as a testament to the pollution-free air. The only sound was our horses’ hooves crackling the leaves beneath them and an occasional bird call. The peace enticed one’s mind to be still. We delighted in jumping over fallen trees that crossed our paths.

After a picnic lunch on the riverbank, we trotted and cantered to the quaint village of Furnace for a glimpse of farming life in the 1800s. The rocky terrain begged the question of how one could farm the land. Witch hazel trees in front of a house kept witches from entering. The bed frames in the house looked the size of a modern child’s bed, attesting to the short stature of the people.

Our evening ended at a pub where local musicians entertained and our guide enchanted us with Scottish lore, leaving us to question what was fact and what was fiction. She claimed that a creepy monster called a “haggis” lived in the Scottish woods. I countered with the tales of a hoop snake that put its tail in its mouth to roll down a Pennsylvania mountain.

Day 4
“Take your rain gear,” was our morning announcement. A light mist fell on us. Undaunted, we ventured along a former stage coach route. Soon we were so remote into the Scottish highland that cows and sheep ceased to be our companions. We were beyond roads, bike trails and hiking paths. The rain turned into a downpour and we hastened to an old stagecoach inn for lunch and warmth by the fireplace.

Despite the rain, we were determined to continue along the trail, and we were rewarded with a summit view of 32 lochs. With clouds above and the mist highlighting the silvery lighting, we experienced the mythical magic of Scotland’s lakes.

Our stamina was tested with extended trots and canters across purple heather hills and boggy moorlands. Even though I’d worked out in preparation for this, my abs were aching. We passed the ruins of ancient settlements and the historic Chapel of St. Columba nestled within the ferns.

With each day, my attempts to be alone waned, and I was easily drawn into the evening conversations. We laughed about our day of relentless rain and how my hands had been blackened by my wet riding gloves. We marveled at the horses’ innate ability to navigate the challenging trails. We shared fascinating stories about our lives.

The environmentalist told us that a suitable housewarming gift in Kyrgyzstan was a baby camel. The photographer shared glimpses of working with the British Royal family. Another shared her experience as a riding stunt double in a movie filmed nearby. As I retired for the evening, I realized this vacation was becoming more than riding a horse across a land. A bond created only by people who share the same passion for horses and challenging adventures was forming.

Day 5
This morning I jumped the very stone wall in front of the castle that was in the ad that had captured me.

The day ride dared us with ditches to jump across, banks to jump off, a gallop down a hill and a ride on a narrow trail bordered by huge crevasses on either side. And yes, when I was offered a nip from the guide’s hip flask, I took it.

I was amazed at the temperament of the horses. If a foot slipped off the side of the trail, instead of panicking, the horse patiently reached for solid ground.

The area was steeped in ancient Neolithic ruins. We rode past mythical standing stones, circular underground burial cairns and the stone circle of Temple Wood — all constructed 5,000 years ago.

Cathy, left, Peter from Ireland, and Jane from Scotland were privileged to ride across the estate lands of 18th century Stonefield Castle (in background)

Day 6
As our horses neared the beach, their bodies tensed in anticipation of an exhilarating gallop along a three-mile stretch of coastline. No fences, no roads, nothing in our path. What a kick!

We rested near the River Ad and then swam our horses across to the impressive Crinan Canal built to carry boats around the Mull of Kintyre. A local artist hailed the ride from his gypsy wagon art studio.

Our trail turned steep and challenging through dense wood. Climbing over large rocks or weaving between closely placed trees, I was a little concerned. But nothing bothered my horse. Unscathed, we reached a clearing in the forest where we rested and enjoyed a picnic lunch.

We descended along a logging road to the “fairy isles,” the little grassy islands a car or bus could never reach. If you hiked, you’d have to swim to the isles. I was riding a horse to the land, perfectly dry, with no effort.

This day ended with an invigorating and lengthy gallop to the deserted village of Kilmory Oib.

After this day, all my sleeping problems vanished. My senses were enlivened by the smell of a good horse, saddle leather and the fresh scent of the land. My busy mind submitted to quiet focus. My muscles ached with the pain of achievement. My trust in a horse was strengthened, the special connection I share with them confirmed. I was hooked, again.

About the writer: Cathy Mann not only continued her riding, but created High Pointe International Equestrian Tours, and today shares with fellow riders the joy of equestrian travel to many places of the world. Visit highpointetours.com 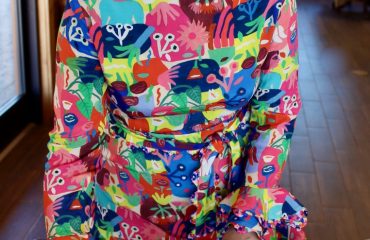 Upcycling Reins and Giving Back 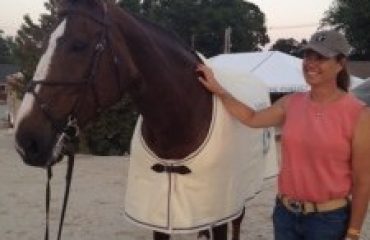 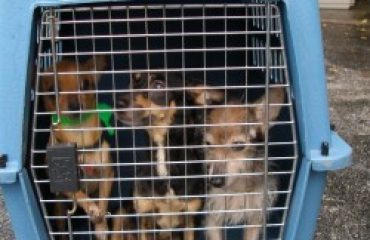