At just 17 years old, Bailee Madison has already been featured in a long list of TV shows and movies. She plays a major role on Hallmark’s “The Good Witch,” has a recurring role in shows like “The Fosters” and “Trophy Wife,” and has starred alongside Billy Crystal and Bette Midler in “Parental Guidance” as well as Adam Sandler and Jennifer Anniston in “Just Go With It,” just to name a few. Her first horse movie was “Cowgirls N Angels,” which set her on the path to producing and starring in “A Cowgirl’s Story,” released April 18 on digital and DVD.

In “A Cowgirl’s Story,” Bailee plays Dusty, who goes to live with her grandfather (played by Pat Boone) while her Army parents serve in Afghanistan. Dusty makes a group of unlikely friends, and convinces them to join her in an equestrian drill team. Dusty has to learn to rely on her grandfather, her faith, her friends and her relationship with her horse to help her endure.

Though she calls Los Angeles home, Bailee has a busy lifestyle as an actress, producer, writer and activist, including her own anti-bullying campaign. Sidelines caught up with Bailee to talk about horses and her newest movie.

Bailee enjoys a moment with a movie horse.

What was your first experience with horses?

I’ve always loved horses. I think the connection between a horse and a human is so powerful, and I think that anyone who’s ever had a chance to be around horses or ride them can vouch for that as well. But my first introduction to horses was really through “Cowgirls N Angels.” I had three days of training in Florida before I went to Oklahoma to film that movie. There weren’t a lot of horses in that part of Florida, so it was really just me and this old horse who was tied with a little rope and he went in circles. I was like Okay, I got this, I got this. Then I got to Oklahoma and the first day, they put me on my horse — his name was Hank — and we were out in this open field. He just started cantering, and it was crazy and so much fun. My love for them really grew from there. So when it came time to get back on for “A Cowgirl’s Story,” I did a couple of lessons with Cody Smith, who was our animal trainer. It was just kind of remembering the steps again, and remembering how to connect with them.

This is the second movie that you’ve starred in and produced. How did “A Cowgirl’s Story” come to fruition?

It came about with our director, Timothy Armstrong. He actually directed the first horse movie that I did, “Cowgirls N Angels.” He called me up and said, “We have a script; I just wrote it. I think you’d be perfect for it, but even moreso, I know that you’re trying to get behind the scenes and look for projects that connect with you and you can kind of step in behind the camera. I think this would be a good match.” And I was like “Oh my gosh, let’s talk.” So he and my mom and me and his family and my sister, we all met at Patty’s, which is our favorite little breakfast spot by our house in L.A. We all sat down and shared a milkshake or two and talked about this movie. I was in love with it, and I was even more in love with the idea of getting to learn more about the producing aspect from a man whom I’ve admired throughout the years, who touched my heart on the set of a movie that we both did together. I knew I’d be in good hands, and he trusts me and I trust him, so for me it was a no-brainer and I was very, very humbled to say yes.

Bailee with Aidan Alexander, who plays Trevor in the movie.

What personal connections do you have to the strong themes in “A Cowgirl’s Story?”

I think the personal connection that I have really comes down to faith, which is an exciting message because I think that sometimes, when it comes to communities of faith, it’s very much portrayed one way and it’s always a good way. It’s hard to show the struggles that come along with faith, and doubts that come along with it. I think that having faith and trusting in God is a work in progress no matter how old you are. You never fully know the type of faith that you have; you’re constantly learning about it and growing. And I think what I connected to most is the internal struggle that we have: sometimes asking yourself and asking God, “Why is this happening? Why is this happening to me? Is there hope? Is there going to be light at the end of this?” And I think that message is really explored throughout this movie, and it shows the many dimensions and the types of faith that people can go through, and the stages within it. I hope the people can see themselves asking the same thing, and connecting with their own life experiences, because that was the hope when it came down to the faith aspect of the movie.

They were amazing! We were fortunate, because we had Cody Smith, who was our animal trainer. He is the kindest man and he’s done incredible movies with animals; he did “We Bought a Zoo,” and everything that has to do with the films that take care of their animals and portray them in a beautiful way. All of his horses were so happy to be there. They were so kind and so sweet, and genuinely happy. I also made sure to spend time with them before we started filming, getting to know them and having a good connection with Cody, so if anything was uncomfortable for me, he had my back. We could just look at each other and kind of say, “Okay, let’s just take a second for the horse and for me.” It was a very, very safe environment. I miss them dearly! I’ve always said that I just want to go back to their ranch and just ride them and say hi just for fun.

Bailee, on set, enjoyed her acting in her second movie with horses.

Do you see horses in your future?

Oh my gosh, yes, I’m always up for any kind of role that pushes me in a physical way, or other aspects that I don’t get to do in my normal life. I don’t know if I can ride regularly — I don’t think I’m in one place long enough to do that. I definitely tried when I was about 8 years old. I signed up for lessons, and I think I got about three lessons in and I had to leave to film a movie for four months, so I never got to finish my lessons.

Is there anything else you’d like to add for equestrians?

I’m just so excited they’re going to see the movie. I hope that everyone connects with the story of people who are going through different things in life, and the struggles that happen. But with friends and family and hope and love, and some beautiful horse love and connection as well, friendship can overcome anything, and there’s always light at the end of our days. 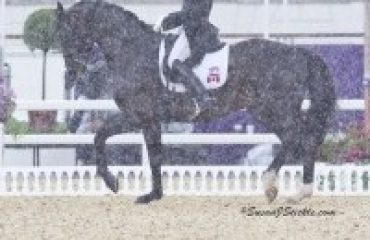