What do you think about ponies as a kid’s first mount?

In my opinion, there’s no better mount when you’re a kid than a pony. I was lucky that when I was 11 years old, my parents bought me a 13.2-hand Welsh Mountain/Cob called Willy Do It. Willy was a good jumper, he didn’t run away when I fell off and he gave me a wonderful, fun introduction to the sport. I think it’s very important for kids and even adult amateurs who first get into horse sports to have a horse that fulfills the main goal, which is enjoyment.

I think the number one thing for any person starting riding is that they truly have fun and to me, ponies are perfect. First and foremost, they’re small in size, which is less intimidating for a new rider. The sheer size of pony as opposed to a horse means that if you do happen to fall off, it’s not that far to the ground. Secondly, the majority of ponies I’ve experienced over the years have many wonderful characteristics: Most of them are quick with their feet and can jump out of nearly any position, so they’re easier to handle than a big horse, and the bulk of them are very good jumpers. To me, this is the perfect way to get a person involved in the sport.

I’m not sure if my kids will be riders or not but as their parent, I want to give them the option if that’s what they desire. Right now they share a 10-hand pony named Emma, and the great thing is you can give her a week off, throw one of the boys on her, and she’s the same as she was the last time they rode her. She’s well-behaved but still has a bit of an engine, which encourages the boys to be better riders. On top of that, she’s a great companion for any horse that needs company in the field or on stall rest — she’s the perfect buddy to keep these high-level horses relaxed.

All in all, I think when people are starting their careers in equestrian sports, nothing beats a pony. They’re tough, hardy animals, and they often have the talent and quality that you might experience in higher-level horses. This can really give riders a feel for what’s to come.

What would you look for in an ideal pony?

I think the number one trait to consider in any horse or pony is character. This is a hard thing to evaluate in one visit — people are drawn to their ability and their scope, but the number one thing is that the pony is suitable in its nature. You want a kind, forgiving pony, a good soul that can put up with a mistake, a pony that enjoys working and doesn’t turn into a maniac at a competition. You want something that riders can focus on their skills: “Rideability is more important than ability” is an old saying for a reason.

When you’re not able to compete your own horses, your wife, Silva; your assistant rider, Mike Pendleton; and your coach and mentor, Phillip Dutton, often step in to help. Can you talk about the importance of having someone in your life who can help out when you can’t ride?

I think in anyone’s riding program, it’s always important to have a coach, mentor or good friend that has the same riding ability as you, or better, that could potentially step in as needed. I started out as a student, then worked as Phillip’s assistant, then was his teammate and ultimately we became best friends, and he’s been wonderful to step in and school and compete my horses when I’m overseas or injured. It’s a massive help having a capable rider to take over.

Again, having Silva to sit on the horses and feel what’s going on is really an added bonus. She can get on the horses and improve them with her talent and experience rather than just standing on the sidelines and coaching me. And Mike has worked hard and learned a tremendous amount since he came to Windurra; I’m lucky to have him as a reliable and capable assistant who can step in to ride my horses.

Boyd on his pony Willy Do It. 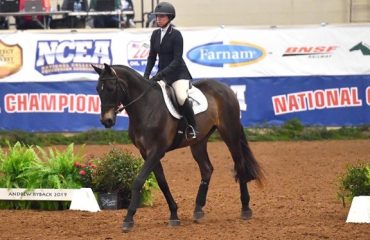 Kirsten Ostling: The Ins and Outs of Equitation on the Flat 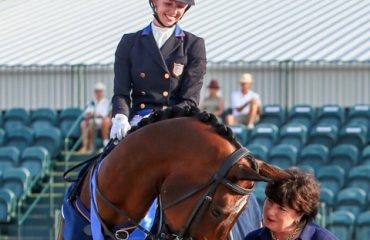 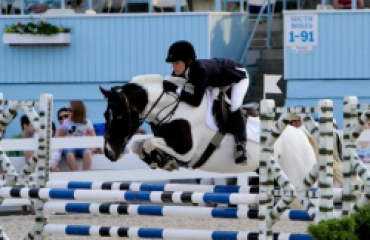