Greer Grammer is following in her father’s footsteps as she pursues an acting career. At 24, the daughter of Cheers and Frasier’s Kelsey Grammer already has an extensive filmography including roles in in MTV’s Awkward and the TV movie Manson’s Lost Girls. But it was her lead role in Emma’s Chance that introduced her to horses.

The movie was based on Red Bucket Equine Rescue in Chino Hills, California, and was shot at the rescue. All four of the horses who played Chance, the “lead horse” in the movie, were rescue horses from Red Bucket. Chance himself is based on a former Red Bucket horse, quirks and all.

Greer took riding lessons prior to filming the movie, and recounted trying to spend as much time as possible riding when they weren’t filming. Sidelines caught up with her to get her thoughts on horses and her acting career.

Did you have a favorite horse in the movie?
I loved all the horses I got to ride in the movie, but if I had to pick a favorite I would have to say it was Rubix (featured on the DVD cover). Rubix and I really understood each other. We called him “the tank” because he didn’t want to move anywhere, which was good for me and for the crew. Some of the horses I rode wanted to go and they would get excited about having a rider on them, but Rubix was easy and moved slow until I told him to go.

You learned to ride for the movie — do you think you will continue to ride?
Horses are such amazing creatures and the relationship between them and a rider is so incredible. I had never experienced anything like it, so it’s hard to get away from. I definitely want to continue to ride! I really loved it. My primary focus is acting so it’s hard to find time, but every now and then on a weekend I like to go and find a place to ride. It’s definitely something I enjoy.

Did you always want to be an actress?
Yes, I have known since I was a little girl that I wanted to be an actress. It was all I ever wanted to do. I used to watch The Sound of Music and My Fair Lady all the time as a kid and I would recite the lines and sing. And I watched every Disney movie I possibly could.

What’s your favorite roll so far?
I’ve loved all the roles I’ve been fortunate enough to play, so it’s tough to choose. I can narrow it down to three because they’re all so different. I loved playing Lissa on Awkward. She was such a character and it was fun to get into her mannerisms and her voice, which are different than mine. I also really loved playing Emma (in Emma’s Chance) and getting to dive into the relationship between her and Chance. My third would be Leslie Van Houten in the movie Manson’s Lost Girls. It was a darker character and a darker subject, and it was fun to get to do something completely different and opposite of “my type.” That’s the thing I love about my job and one of the many reasons why I do it — I love to tell stories and play different people.

What are your thoughts on horse and dog rescue after being at the Red Bucket Equine Rescue?
I think animal rescue work is absolutely incredible. I have a rescue dog. We got her about 10 years ago and she’s the sweetest. It was truly life changing and overwhelming to see the rescue horses and especially to see the work they do at Red Bucket. You see these beautiful, gentle giants who have been forgotten and abused and it’s heart breaking. But they’re so sweet and they’re so smart, and it’s amazing to see where they were and how much they grow. Rescue is truly an incredible thing and I have so much respect for anyone who chooses to do it as their line of work.

What are your next projects and your life goals?
I have a movie that comes out next year called Altitude. It was fun because I got to play a totally different part and be a mean, scary terrorist who highjacks an airplane. So it’s something totally different and also my first action film. My life goals are to keep working as much as I can and to continue to play different parts and tell stories. I hope to have a family someday as well, but that’s definitely further down the line! 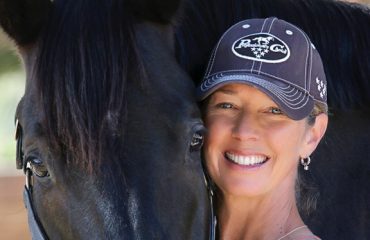 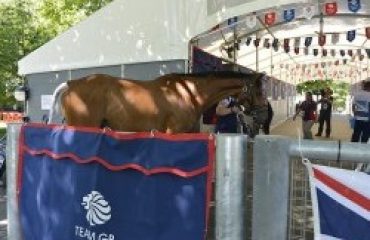