Maria Sabers: Aiming for the Top

Maria with her trainer Anne Kursinski

Though she’s only 12 years old, Maria Sabers has more grit and determination than many twice her age. She’s known throughout the circuit as an equestrian who puts in long hours, has an excellent work ethic, refuses to give up and enjoys rescuing animals in her spare time.

She began riding at the tender age of a year and a half and currently trains with Anne Kursinski of Market Street, a farm in Frenchtown, New Jersey. Maria is in wonderful hands with Anne, a five-time Olympian with two team silver medals from the 1996 Olympics in Atlanta and the 1988 Olympics in Seoul, where she also tied for fourth individually aboard her famed mount Starman. Through her Market Street facility, Anne uses her talents to help riders like Maria achieve their goals.

Maria has been training with Anne for almost two years showing hunters, equitation and jumpers. With Anne and her mom, Mia Sabers, Maria has a tremendous team and support system, and has some big goals lined up for the future. Sidelines caught up with Maria, Mia and Anne to learn more about the talented young rider.

Mia Sabers: Maria has always loved horses. She would carry a plastic Lego horse with her, everywhere, when she was just a year old. She got her first pony, Valentino, when she was two. She would ride him all over the farm on a lead line. If the pony spooked and dumped her, she would never blame the pony. It was always her fault. That pony could do no wrong! I love that Maria rides. I love the discipline and responsibility that comes with the sport.

What horses do you compete?

Maria Sabers: Only One is owned by Anne Kursinski and I ride him in the 3’ equitation classes.  Cher is owned by Cynthia Deibert and used for the children’s hunter. I ride Boeket, who we bought from Anne, in the 1.0m jumpers. Each horse represents a different challenge for me, and Anne feels riding many horses will expand my riding ability.

What challenges have you faced in the show ring?

Maria: The challenges I’ve experienced throughout my riding career have been competing against older riders as I’ve always competed at a higher level than my age group. A recent challenge I experienced was during the Lake Placid Horse Show when Anne asked if I would show a horse I had never ridden, Cher. I ended up winning Champion the first day I showed her. Every time I go in the ring there’s something to learn. Every ride brings a new lesson.

What are some of Maria’s talents in the saddle?

What are some of your favorite memories of Maria’s riding career?

Mia: My favorite memory from Maria’s riding career was when she was 5 years old and showing at the Santa Barbara National Horse Show. They put her in her first class jumping cross-rails. She had never jumped in a show before and was riding a pony named Wild Flower. Maria jumped the first jump and looked so cute, and then fell off on the landing side. She was fine, so she continued to go into the flat class. She was doing great until the pony spooked and took off. Maria hung on for dear life but finally fell. Again, she was fine. We told her she could stop, that we would understand, but she wanted to continue. She composed herself and got ready for the next flat class. She went into the ring and looked perfect. As the pony went around the ring in the same spot as before, she again took off full speed with Maria hanging on. The pony came to a dead stop and Maria flew like Superman right over the pony’s head. Well, that was the last class for the day. The next morning, Maria was to show again, and we told her, “You don’t have to get back on that bad pony. We can go home.” “No,” she said, “I want to show again.” Well, she rocked it that day and left the show as a Santa Barbara National Champion on Wild Flower! Her story was in the Malibu Times. We were definitely proud parents and still are. We love that Maria is so focused and determined.

What are some of your riding goals?

Maria: My riding goals are to become a better rider after every lesson and to ride as well as my trainer, Anne Kursinski. I would love to follow in her footsteps and compete in multiple Olympic Games like she has.

What are some of the goals you’ve set for Maria in the show ring?

Anne: Some goals for Maria are to go to WEF 2019 to show. I want her to learn more about riding jumpers and winning in the jumper ring. And, of course, I want her to continue with her equitation showing and hunters as well. Within the next few years, I believe Maria will be winning in the big equitation classes, the junior hunters, the high junior jumpers and U25 jumpers!

What’s one thing you’d like people to know about you as a young equestrian?

Maria: That horses have given me much more than I could ever give them thanks to their patience and confidence. I’m inspired by the trust and bond that’s created between me, my trainer and each horse I ride. Without trust we can’t be a team.

How have horses helped Maria outside of her riding?

Mia: Riding has given Maria confidence and pride. It’s also taught her that even when you have a bad day, you can recover and still accomplish your goals. It’s taught her patience and responsibility that she carries over into her learning habits and school.

What do you like to do when you’re not riding or showing?

Maria: When I’m not riding or competing, I enjoy writing stories, reading and training my miniature ponies, Blaze, Storm and Annabelle. I’ve rescued many animals who now live on our farm, so I love spending time with them.

Can you tell us a little more about your rescue animals?

Mia: We have many animals. We recently adopted a pot-bellied pig named Ella. She was in a home where the family dogs went after her, and she had a massive open wound that had to heal from the inside out. Our vet, who removed the pig from that home, asked if we’d like to adopt her, and we said, “Yes, absolutely!” We have another pot-belly named Charlotte we adopted about two years before Ella. Our newest addition is Roscoe, a Great Dane mix who is a survivor from St. Thomas. He went through both Hurricane Maria and Hurricane Irene. We shipped him to our farm and added him to the family. Anytime there is lightning or thunder, he panics and starts to pace. Poor guy. He is a real gentle giant. Both girls, Maria and her 10-year-old sister, Sophia, are huge animal lovers and spend every day on the farm playing with and caring for them. 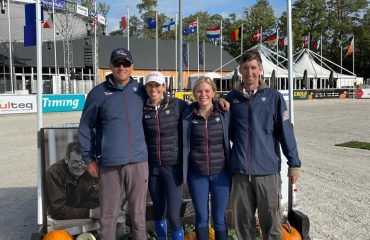 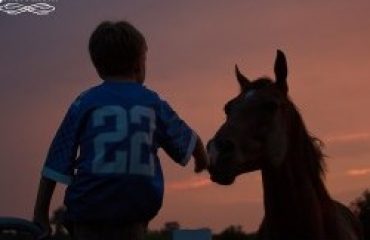