The equestrian world is mourning the loss of the great show jumping mare Sapphire, who died on June 22, 2014, following complications from colic. With longtime rider, McLain Ward, the 1995 Belgian Warmblood mare was a member of many U.S. Jumping Teams helping the United States capture Team Gold at the 2004 and 2008 Olympic Games and Team Silver at the 2006 FEI World Equestrian Games. Millions of Sapphire’s fans took to social media to mourn her loss and share wonderful memories of the amazing mare. The United States Equestrian Federation (USEF) sent out an announcement, which included a statement from McLain, who talked about his longtime partner, Sapphire, known as Sara around the barn. He said: “Our entire Castle Hill family and every person she has touched has lost a great friend. Thank you Sara not just for all the dreams you made come true but simply for being who you were. You always will be my champion in every way. Godspeed, good friend.”

It seems like most of the equestrian world wants to be in show biz! The movie “The Sunday Horse” was recently being filmed in Atlanta, Georgia, and sent out a casting call for extras including “Caucasian girls with their own English Horseback Riding gear.” Facebook almost caught on fire the word spread so rapidly about the movie. Apparently the oddly phrased wording in the casting call didn’t slow anyone down and we assume lots of young riders with their own English Horseback riding gear tried out to become extras.

It’s A Girl! Congratulations to Liza Boyd on the birth of her second child, Elizabeth Adeline Boyd. The whole family, husband Blake Boyd, and daughter, Elle, 4, are excited about the new edition. Liza is the reigning USHJA International Hunter Derby Champion.

Get the latest scoop about the 2015 FEI World Cup Finals in Las Vegas from their new blog “Inside the World Cup with Marty Bauman!” Marty is Press Chief and Director of Sponsor Marketing for the Las Vegas World Cup Finals. Sign up for the World Cup Club to receive the latest news and ticket info for the Finals and contact Marty directly at his Classic Communications office if you’re interested in vendor spaces, sponsorships or any other information.

The Hampton Classic Horse Show is expanding food options for horse show attendees this summer. In addition to the veteran food vendors from previous years, the show is adding almost 10 new vendors, and a new twist on a New York tradition; a Farmer’s Market.  The Classic will feature 18 gourmet food choices scattered throughout show grounds for riders and spectators to enjoy a culinary connection to the state of New York’s local food businesses. The Farmer’s Market will be different every day, with six vendors featured per day. Also featured will be wine club subscriptions with local Hampton wines.

The end of the NAL season is approaching but there’s still time for riders to earn points to qualify for the North American League finals. The NAL offers a great opportunity for riders to qualify for NAL Finals at the Pennsylvania National Horse Show and the Las Vegas National Horse Show.  The qualifying period for the NAL runs through August 31 and anyone can compete in NAL qualifying classes. However, only current members are awarded points. Joining the NAL is the best way to ensure that you get the points necessary to make it to the Finals and annual memberships are only $40 per rider.

The Equestrian Aid Foundation fundraiser in Flemington, New Jersey, was a huge success. The event was held at Sand Hill Farm, the private residence of Scott Stewart and EAF board member Ken Berkley, who co-chaired the dinner party along with fellow board member Mimi Tashjian. One of the highlights of the night was special singer Chad Michaels, one of the world’s premier Cher impersonators, who wowed the crowd with a concert of the diva’s top hits.

Sidelines Magazine was saddened to hear of the passing of Mindy Darst. The much-loved and respected trainer, of Lochmoor Stables, in Lebanon, Ohio, lost her battle with cancer in June. She was 54. Sidelines staff writer Lauren R. Giannini interviewed Mindy for a story that appeared in our April 2014 issue. After learning that Mindy had passed, Lauren said, “Mindy was an inspiration and will always be my reminder to think positively, nurture hope no matter what the odds might be, and embrace every tiny moment of joy. It was an honor to collaborate with Mindy on her story – she earned my respect and my affection.” Sidelines sends our condolences to Mindy’s family and friends. 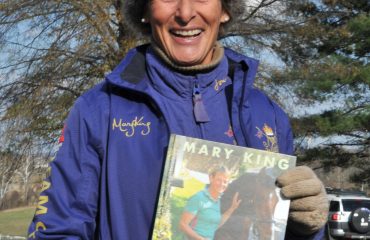 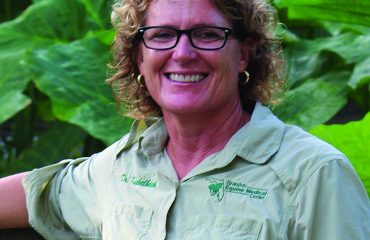 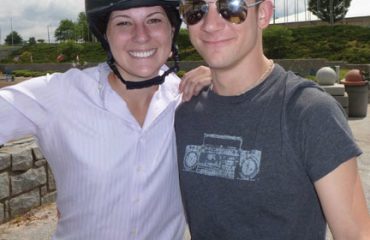