When dressage rider Endel Ots reflects on his achievements and challenges he’s encountered, there’s one thing he wishes he could tell his younger self. “If I could give younger Endel advice, I would tell him, ‘You’re going to be OK,’” Endel said. “We often label things as bad or good. However, it’s not until later on in your journey when you realize that what you thought was bad at the time was actually the best thing that could have happened to you.”

Endel grew up on a farm in De Pere, Wisconsin, and was hooked on riding at age

8. Discipline was instilled in Endel during his childhood, as he was expected to care for his many animals and do farm chores. After he got his start in jumping, he transitioned to dressage, intrigued by the pursuit of perfection. “Something about the idea of never being good enough and always striving to do better very much resonated with me,” he said.

Endel’s dream of becoming an international dressage rider was the driving force behind every choice he made. “All I knew was I had a dream to represent my country in international competition, and that dream kept me going every day, even though it seemed hopeless at times,” he explained.

Through his dream-chasing journey, Endel has developed the positive outlook and perseverance that led him through a heartbreaking turn of events that forced him and his horse Lucky Strike to withdraw from the 2019 Pan American Games in Lima, Peru. With every excuse to stay home, Endel refused to be discouraged and traveled to Lima to support his team. Then, less than one month later, he turned around to ride Lucky to the win in the USEF Intermediaire I Championship at the Festival of Champions at Lamplight.

Although he’s a Midwest farm boy at heart, Endel loves the weather in Florida and has found a home in Wellington.

At age 23, after eight years of scraping by as a working student in Chicago, Endel accepted a training opportunity with Hubertus Schmidt in Germany. “Gary Rockwell helped get me an interview there to work and ride, and I’m forever grateful to him for that,” he said. “I was doing very well in the competitions at a local and national level, but I had my eyes set on international competition. My goal was to represent my country. I had only worked in one place, and I felt that it was important for my development to see as much as I could from as many trainers as I could.”

While Endel gained a valuable education with Hubertus, he also learned more about the riders he had once idolized. “My biggest takeaway from training in Europe is that there are no ‘gods,’” he said. “I used to think that people like Edward Gal, Lars Peterson and Ulla Salzgeber could do magic on these horses, and they can. The thing that I realized is it wasn’t because they had some magical touch — it was because they worked hard every day perfecting their craft.”

Danish Olympian Lars Petersen was someone Endel had always looked up to and when he had the chance to train with him, he jumped at it. Pevious clients Steve and Kristin Cooper, of Chicago, offered Endel the ride on their KWPN gelding Toscano in hopes of making the 2011 Pan-American Games team, and Endel decided to leave Germany for this opportunity of a lifetime. To prepare, Endel moved to Florida to train with Lars. Ultimately, the pair was selected as alternate and enjoyed training with the team. “It was wonderful to ride with another childhood hero,” Endel said.

Not only did he gain valuable knowledge from Lars, he also found his wonderland: Wellington, Florida. With a self-proclaimed allergy to cold weather, Endel has come to appreciate the joys of year-round sun. “Florida was exactly what I always wanted. I was a small fish in a big pond. With so many great riders in such a small area, I knew it would help me push myself to be the best trainer, coach and rider possible,” he said.

One month after the Pan Am Games, Endel turned around to ride Lucky Strike to the win in the USEF Intermediaire I Championship at the Festival of Champions at Lamplight.

Since establishing his own training business, Ots Dressage LLC located inside Grand Prix Village in Wellington, Endel has developed a recipe for success made of ingredients from every trainer he has studied under. Not only has Endel racked up numerous titles at the U.S. Dressage Finals, Festival of Champions and World Young Horse Championships, his students have also succeeded in the FEI Nations Cup and North American Youth Championships. Endel is partnered with Ots Sunrise Farm, his father’s breeding operation in De Pere, Wisconsin. “He breeds a few horses and when they’re old enough, we bring them down to Wellington for training and competition,” Endel said.

Young horses have always had a special place in Endel’s heart, going all the way back to Chicago where he started 3-year-olds as a working student. “I love young horses because they’re blank slates,” Endel said. “If you train a young horse through the levels, then when you get to international competition, you’ve created a relationship over the years. Every horse is a little bit different — just like every person is not the same. We all have similarities, but what works on one horse perfectly might not work on another. There are many roads to get there and it’s an exciting adventure to find the right path to accomplish your goals.”

In July 2019, Endel was so close to his dream of representing the United States he could almost touch it. “Bad things happen, and it’s OK to give yourself some limited time frame to feel bad. You never know how things are going to work out, but somehow they always seem to work out for the best,” he said.

Earlier in the year, he was named to the U.S. team with Lucky Strike, a 9-year-old Hanoverian gelding owned by his father, Max Ots. En route to the airport in Miami, Lucky suffered a trailer injury resulting in superficial cuts that ultimately led to their withdrawal from the competition. “My main concern in the beginning was to make sure Lucky was going to be okay and there would be no long-term consequences from the cuts,” he said. “After that, I was very disappointed that I wouldn’t be able to ride for the team medal for the U.S.”

While Endel wouldn’t realize his dream of going down centerline in Lima, he still traveled to help his team. “I felt that I needed to support my team however I could, whether that meant taking boots off horses or being an extra set of hands. I was part of that team, with a horse or without,” he said, upholding his value of good sportsmanship.

Endel and Jewel at Ots Dressage in Wellington, Florida.

Jennifer Baumert, Endel’s teammate who won individual bronze aboard Handsome, was devastated when she learned he couldn’t compete. “I know this sounds a little dramatic, but it was a little like losing a limb! He was so much a part of the team that it didn’t seem right for him to not compete alongside us,” Jennifer said. “I was not at all surprised that Endel came to Lima to cheer us on; I would have been surprised if he didn’t come. From start to finish, Endel only thought about what was best for the team and for his horse, Lucky.”

Lucky Strike made a full recovery, much to the delight of Endel, who’d been with Lucky from the beginning. Endel found Lucky as a 3-year-old during a client’s shopping trip in Belgium. Though not in the market for a personal horse, he couldn’t help himself from trying the big, black, puppy-dog gelding. “After I got done riding him, I thought he was very special. I called my dad and asked him if this was something we could do together. I didn’t have enough money to buy the horse, despite his reasonable price. I made a deal with my dad that if he bought the horse, then he would never have another bill on him,” he said.

Not even a month after the Pan-Am Games, Endel decided to go for “plan B” — the Dressage Festival of Champions at Lamplight. Capturing the hearts of spectators with their comeback story, the pair danced their way to sweep the win in the Intermediaire I Championship. “For me, it was very important to show everybody that Lucky was healthy and we weren’t going to give up,” he said. “It’s been a wonderful journey. Lucky has allowed me to see the world and meet some wonderful people and horses.”

Married to His Job

In Germany, Endel learned that there was no magic touch, only hard work — so hard work must ensue, day in and day out. “I’m not married — not to a person at least,” he laughed. “I’m married to my job and my horses. They’re everything to me. I have had an undying drive and passion to be the best person and horseman I can be.”

With Lucky, Endel is working hard to prepare for grand prix and perhaps compete this year in the developing grand prix at the Festival of Champions. “With Lucky, my main goal has always been to have a sound, happy athlete, so he comes out every day happy in the work. Lucky is special for his work ethic in the competition arena. He somehow knows, and he gives me all he has.”

Outside of the arena, Endel spends his time reading books about high achievers, self-development and philosophy. To escape from the stresses of daily life, he enjoys watching movies and stand-up comedy and working out in the gym. He said, “The gym and working out at the end of the day are great for my mental clarity, and are almost like meditation to me. I always feel better after I go to the gym.”

Despite securing his own spot among the glamour of Wellington, Endel doesn’t forget his humble Wisconsin beginnings. “I’m a Midwest farm boy at heart,” he said. “I’ve had the good fortune of working with some very great trainers in the past and riding some wonderful horses. I’ve made many mistakes over the years, but I don’t think making mistakes is necessarily a bad thing. The most important thing is to learn from them.” 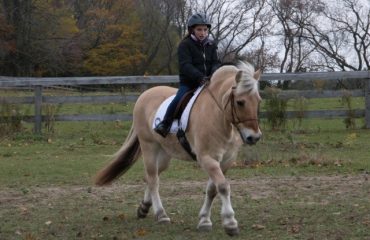 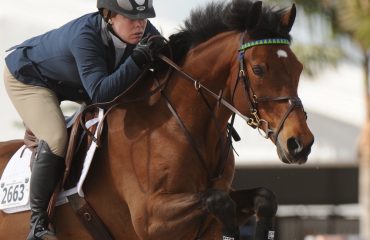 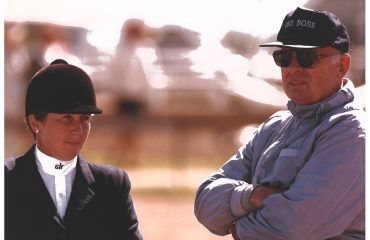