Phillip Dutton claimed his first individual Olympic medal in Rio — the first representing his adopted homeland, the United States. For the six-time Olympian and his supporters, that bronze is almost as good as gold — a lovely complement to the team gold medals he won for Australia in the 1996 Atlanta Games and the 2000 Sydney Games. A quiet, thinking man of action whose specialty is the cross-country, Phillip is genetically endowed with distinctive Down Under daring and determination. Imagine The Man From Snowy River goes eventing…

Those genes came in handy at the 2016 Olympics. Rio, deemed the most challenging cross-country course since Sydney, fulfilled many dreams, thanks to the late Bruce Duchossois, who always believed in Mighty Nice, an Irish Sport Horse he imported from Ireland in 2010. Bruce bequeathed the horse to Phillip, who put together a partnership of his friends. Using Bruce’s farm initials to honor his memory, the HND Group includes Annie Jones, Michael Bombar, Kevin Keane, Caroline Moran, and Phillip and Evie Dutton.

Mighty Nice, aka Happy, shares personality traits reminiscent of Bruce — cheerful, easygoing, interested in everyone and everything. “Happy’s definitely one of the barn favorites,” said Emma Ford, his groom and mother, nanny, nurse and friend. “He thinks everyone’s coming into the barn to see him. He’s always just so happy to see everybody. When you’re grooming him on the cross-ties, he’s looking around. He loves the attention. You’d never believe he was an event horse. He’s a gentleman on the ground.”

The U.S. team of Phillip, Boyd Martin and Olympic rookies Lauren Kieffer and Clark Montgomery, led by U.S. Eventing Chef d’Equipe David O’Connor, worked hard to prepare for the Games. But that old saying about the “best-laid plans going awry” certainly applied to Rio. For starters, a minor training injury sidelined Phillip’s number-one horse, Fernhill Cubalawn, a week before their departure for Rio. Disappointing for Cuba’s owners, definitely; in retrospect, it seemed like fate.

Like Phillip, Mighty Nice’s forte is the cross-country, but he wasn’t always reliable about jumping clean in the final test where rails fall all too easily. Phillip thinks that eventing is a genuine test of horsemanship where you must be good at all three skill sets, just as your horse has to master all three phases. “There’s no point in having a great cross-country horse if, when you go show jumping, he doesn’t understand the difference,” said Phillip. “Cuba had a better show jumping record, so I was in agreement with him being picked first. But I spent a lot of time traveling around to different show jumping venues to improve Happy. He’s not my fastest horse, but I think he’s my best horse cross-country and, as it turned out, Happy was the ideal horse to take, and he jumped really well.”

An understatement of monumental proportions, considering how Mighty Nice lived up to his name in Rio. His entourage felt that Bruce was present in spirit. Evie Dutton recalled: “We were saying that the whole time in Rio: that it felt like Bruce was there. I said to Phillip, ‘Bruce is on your shoulder.’ It was amazing. Mighty Nice has always been a special horse and he proved to be a true champion. He rose to the occasion in Rio and gave it his all in every phase. It was an incredible time that we’ll remember forever.”

After dressage, Phillip was 15th on 43.60, only 6.60 points from the leader. The rest of the team, Clark and Loughan Glen, Lauren and Veronica, Boyd and Blackfoot Mystery were ranked lower but still within 11 points of first place. The next day, the leaderboard turned inside out, dashing the U.S. team’s medal hopes when only Phillip and Boyd completed the cross-country.

“Nobody was expecting the cross-country to be as tough and as technical as it was,” said Phillip. “The last three or four Olympics have been on the soft side as far as the cross-country goes. We walk the cross-country time and time again. You step it out. You know every blade of grass, every contour in the land. A lot of the cross-country comes down to reflexes and reacting. I’ve been doing this long enough now that I know I can go out there and give it my best shot and see what happens.”

Early in the cross-country, Phillip had an “OMG!” moment when Happy misread the corner brush. With his own body outside the flag, he managed in the air to push 1,000 pounds of horse to the left so that Happy’s right shoulder stayed inside the flag, thus avoiding jump penalties.

“I can’t say any thought went into what I did,” said Phillip. “Happy surprised me, because he’s about the most honest horse I’ve ever had, but I think somehow he didn’t read that fence right at the last second. He wasn’t sure which way to go and he was going to go right. I had to let him know, ‘No, we can’t do that.’ I was confident when we were jumping, because I looked down and could see we were inside the flag.”

After the miraculous save, Mighty Nice lived up to his name, jumping brilliantly through every direct route. They added only 3.2 time penalties to their dressage score for 46.80 and fifth place. Two rounds of show jumping added one time penalty from the qualifier and one rail in the medal round for a final score of 51.80 and the bronze medal.

“Phillip has a certain grit. He digs right in and makes it happen,” said Caroline. “He’s put a lot of effort into that horse from the git-go. He always loved that horse and had a lot of faith in him. He trudged along through a couple of minor injuries, but he knew that horse had it. I’ve been involved with horses all my life so I know you’re not going to win all the time, but when you have someone like Phillip on a horse’s back, anything is possible.”

On the Wings Of Angels

“This was Bruce’s dream. He put a lot of time, effort and passion into this sport,” said Caroline. “We wish he were still alive and with us, especially in Rio, but we were honored to be there in his place. We were definitely living Bruce’s dream. He was there in spirit. I think Phillip was quite happy to have Mighty Nice when he saw that cross-country course. It all happens for a reason, and I’m a firm believer that Bruce had something to do with it.”

Rio was an emotional roller coaster, but produced a heartwarming, brave story of a horse and his human “family” who love him. Emma, who signed on in 2005 to take care of Phillip’s horses at home and at the big international events, summed it up. The roller coaster got going when Cuba was withdrawn and built from there when the pressure moved to Mighty Nice whose “family” wants only the best for him because of his close connection with Bruce.

“We want the best for all our horses,” said Emma. “Once we were at the Games, I felt that Happy knew he had to do his best. He got a little hot in the dressage warm-up, but his partnership with Phillip is so real that he went in that ring and produced a personal best. With Boyd going clean cross-country, we were all on a high until it went wrong. For myself, sending Happy out on the cross-country is always a mixture of excitement and dread. I want him to perform well, but mostly I want him to come home safe. I believe Bruce was watching over us. The pressure of getting through that final jog and the show jumping not being Happy’s biggest strength had me a nervous wreck! Getting the medal, I have no words. I guess I understood what crying for joy really means. I’m just so happy I was there. Phillip has worked so hard — I’m glad he finally achieved it.”

Everyone’s home, off and running again. Phillip’s competing, training and doing the honors with the barbie when there’s time for a family dinner with Evie and their daughters, Mary, Olivia and Lee Lee. Mighty Nice is enjoying a well-earned vacation. Emma’s tending her charges. Evie’s schooling young prospects.

As for Phillip’s plans: “We have Fernhill Fugitive slated to go to Burghley — I’m looking forward to that,” he said. “I have some other young horses coming up that would hopefully be going to Fair Hill International, a couple for the one-star. A lot more of the same — keeping the horses coming along, trying always to find the good ones, enjoying these good horses and people around us, and trying to improve and get better.” 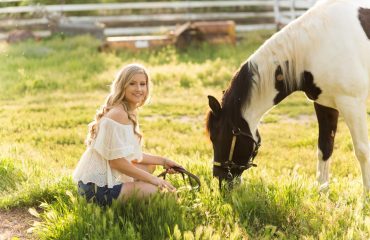