Last month we talked about jumping single fences, water and banks. This month we’re talking about ditches and jumps that include ditches. Like most cross-country obstacles out there, the main key to introducing your horse to jumping ditches is confidence. This begins with understanding: The horse needs to have a clear understanding of what a ditch is. It’s only a hole in the ground, and a horse should take off and land almost as if there isn’t a ditch underneath him; like it’s no big deal. There should be a clear understanding that there’s not going to be a lion jumping out of it!

When you’re competing, a ditch should not be ridden with speed or aggression. It should be steady and balanced, and the horse should realize that the daunting hole in the ground on course is just like the holes in the ground the horse has encountered in training.

At Windurra, I’ve designed the ditches so they’re side by side and they increase in depth and width as the levels go up. When schooling ditches, I like them pretty shallow, not deep holes, because if a horse puts a foot in the ditch, it’s better if it doesn’t go up to its knees and scares the horse. I also like to plant trees or hedges to the sides so the horse doesn’t run out to the side.

I was also lucky enough to design the schooling course at Stable View, our winter base in Aiken, South Carolina, which was built by my friend Eric Bull, who also built our course at Windurra. It’s a fantastic field that’s totally irrigated and designed to bring horses up the levels. On the schooling course there, we have a small, Novice ditch, then Training, Prelim and up to Intermediate. Beyond that there’s a proper coffin, a ditch with jumps a couple of strides on either side, and a variety of Trakehners, a ditch with a jump directly over it.

With the young horses, I’d start with the progression of small to large ditches; as the horse is more seasoned we can go straight to the Trakehner. Ninety percent of the time with a coffin, no matter how seasoned the horse, I’d trot or canter the ditch at an angle before taking on the whole question. As a horse is jumping part A, it helps his confidence to know what’s on the landing side.

Quietly and gently circling the ditch at a walk before you try jumping it will get the horse comfortable. I don’t mean standing there looking into it, but moving around each side. I’ve found if you can get the horse over the small ditch the first try, the next time is easier and by the fourth or fifth time you can come in a slow trot.

If you come in too aggressively it will rattle the horse. If the horse hesitates, then puts his feet in and backs up, and there’s dust and smoke and the rider is kicking and whipping the horse, you’ve got a problem; if you go real easy, you can come in at maybe 60% effort, then 40% and eventually the horse will be steady on through. I’ve found over the years this is the best approach.

With the rider’s position, since there’s no height to a ditch, there’s no need for a crest release or a forward position. If you’re too far forward and anything goes wrong, you’re going to end up in the ditch, looking up at your horse! Lengthen your rein, push your lower leg forward a little, and keep your upper body slightly back in a defensive position. If the horse spooks or stops, you’re in a driving seat. You can soften in the air but there’s no need to come forward over the jump because there’s no height.

The next step up from an open ditch would be to connect it to jumps. It’s easiest to try the ditch alone first, then add the “C” element, or jump after the ditch, then put the first fence into the mix. This is definitely not a speed jump. You often refer to a short, bouncy, connected canter as a “coffin canter” for a reason: With this organized approach, the horse can see over the jump before takeoff and knows what’s coming. Again, the rider is in that defensive position.

The Trakehner is almost easier than the open ditch because the rail draws the horse’s eye up. This is more of a galloping jump — you can approach it with a bit of pace and practice jumping it out of stride. With the Trakehner, the horse would likely take off and land in the same position with or without the ditch underneath. It’s more of a rider question — the ditch provides an element of spook, but you’re really trying to jump the fence as if there’s no ditch. The rider could follow a little more over the Trakehner. I find that once the horse is educated over ditches, the Trakehner is quite an easy fence.

Boyd on course at the 2020 Plantation Field International Three-Day Event CCI3*, showing the defensive position over the middle element of a coffin fence. 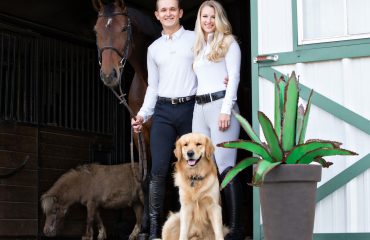 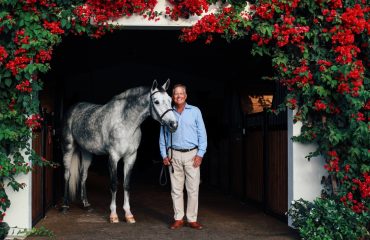 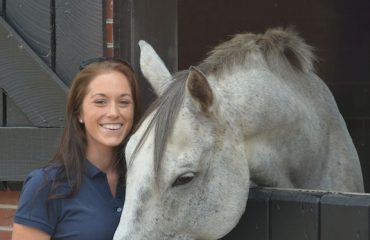